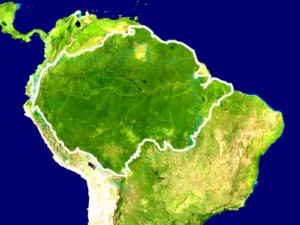 The Amazon rainforest is the largest of all rainforests, covering some 2,336,344 mi2  in the Amazon and upper Orinoco lowlands or roughly 40 percent of the South American continent. It extends from 5°N to 15°S, mostly in Brazil but also into surrounding areas of Bolivia, Colombia, Ecuador, French Guiana, Guyana, Peru, Suriname, and Venezuela and accounts for about  60 percent of Earth’s remaining tropical rainforest. The land surface is one of plains and low tablelands up to about 1,300 ft asl. In addition to the great Amazon River, the forest is drained by a multitude of large tributaries, including three other of the world’s 10 largest rivers (by discharge): the Madeira, the Negro, and the Japurá. A dense network of thousands of smaller streams, lakes, and abandoned meanders carry water through the forest and create an intricate mosaic of habitats and environmental conditions.

Climate. While the climate is humid tropical (Af) with warm temperatures and rain falling year round, the forest region is far from uniform in precipitation amounts and season of maximum rainfall. Annual precipitation totals vary from 59-118 inches, increasing from east to west. The ITCZ draws moisture far inland from the Atlantic Ocean; its latitudinal shifts influence the timing of the precipitation maximum, with the rainiest months occurring when the ITCZ is overhead and the driest when it most distant. The highest amounts occur in the west, where the Andes cause orographic uplift.

Convective uplift promotes cloudiness that keeps temperatures below 100°F. Mean annual temperatures  range from 73° to 83°F; diurnal temperature ranges are 14-18°F. The forest itself is a water recycling system that maintains high humidity via transpiration. In the central Amazon Basin almost half the moisture derives from evapotranspiration.

El Niño events result in years of drought and widespread fires, particularly in the central and northern Amazon Basin, where precipitation may be 50 percent of normal.

Soils. The lush Amazon rainforest grows on soils of low fertility developed on deeply weathered and highly leached bedrock of Brazilian and Guiana shields and thick sedimentary basins. Plants thrive due to tight nutrient cycling by shallow root systems and mychorrhizal fungi. Any nutrients washed down from the canopy are immediately draw back into the plans. Dust blown in from Africa’s Bodélé depression (in Chad) inputs fresh nutrients at an estimated rat of 50  million tons/year. Some of the most fertile soils occur in the alluvial deposits of whitewater streams that originate in the Andes. Fertile black soils (terra preta) also can be found on bluffs once inhabited by indigenous peoples. Organic wasters and burned organic materials accumulated over hundreds of years became deposits that resist decomposition and store and exchange plant nutrients.

Biodiversity. The Amazon Rainforest contains 10 percent of Earth ‘s known species and probably thousands more yet to be described by science. At least 40,000 plant species exist there. Among vertebrates are at least 428 amphibian species, 378 reptiles, 1,294 birds, and 427 mammals. Insects and other invertebrates may number in the millions. In 1999-2000 approximately 1,200 new species were discovered, or one every three days. While most were small invertebrates, some were mammals. 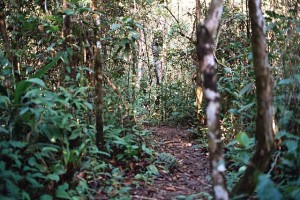 Vegetation. Vegetation is dominated by a classic tropical broadleaf evergreen forest, but a variety of other plant communities also exist, including seasonally deciduous forest, open woodlands, grasslands, and wetlands. Local conditions of climate, soils, flood regime, topography, and drainage determine actual vegetation a a given site. Roughly 90 percent of the region is covered by terra firme rainforest, an assemblage of evergreen trees growing in three somewhat indistinct layers that form a closed canopy above a sparse ground layer of seedlings and small saplings. Since little sunlight penetrates to the forest floor, herbs and shrubs are few. Tree density is also low, and it can thus be rather easy to walk through the forest. This forest type is never inundated by the seasonal floods of the Amazon. 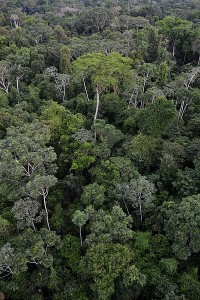 The canopy of the terra firme forest stands 80-110 ft above the ground but is pierced by giant emergents such kapok (Ceiba pentandra) and brazilnut (Bertholletia excelsa) that attain heights of 160 ft. Woody vines (lianas) often festoon the emergents and stranglers (primarily figs) send robust roots down from the treetops to the ground. Epiphytes (orchids, bromeliads, ferns, etc.) cling to branches, stems, and leaves. Climbers work their way up the boles of trees to reach sunlight by either twining around the stems or grasping the trunks with tendrils. In gaps opened by treefalls, cecropia (Cercropia spp.) and balsa (Ochroma lagopus) sprout in the temporary sunlit patches and quickly grow into canopy trees.

Two types of forest are under water for months during the annual flood of the Amazon River and its many tributaries. In parts of the basin floodwaters rise 40-65 ft above low water levels. Várzea grows on the floodplains of whitewater streams such as the Napo, Madeira, and Solimões rivers, where nutrient-rich alluvium is deposited each year. Várzea contains fewer species than terra firme forest; those trees present tend to be a subset of the latter tree flora. Kapok is again a common emergent. Wild rubber (Hevea spp.) and palms are abundant. Canopy height is 50-100 ft. Igapó is the flooded forest that grows along tannin-rich blackwater (eg., Rio Negro) and nutrient-poor clearwater streams (eg. Xingú, Tocantíns, and Tápajós). Trees of the igapó tolerate soils that are waterlogged  for 5-7 months, during which time they are dormant.  Trees are often gnarled, have leathery evergreen leaves, and stand 80-90 ft tall. Species richness is low and one tree (most often Aldina latifolia) and one shrub species (usually camu camu, Myrciara dubia) commonly dominate stands. Rubber trees and cercropia also appear in igapó forests. During the flood fishes such as tambaqui (Collossoma  macropomum), black piranha Serrasalmus rhombeus), and some catfish eat the fruits and disperse the seeds of rubber trees, palms, and camu camu. Freshwater sponges attach to submerged tree branches. This forest type supports few lianas and no herbs other than some epiphyes. 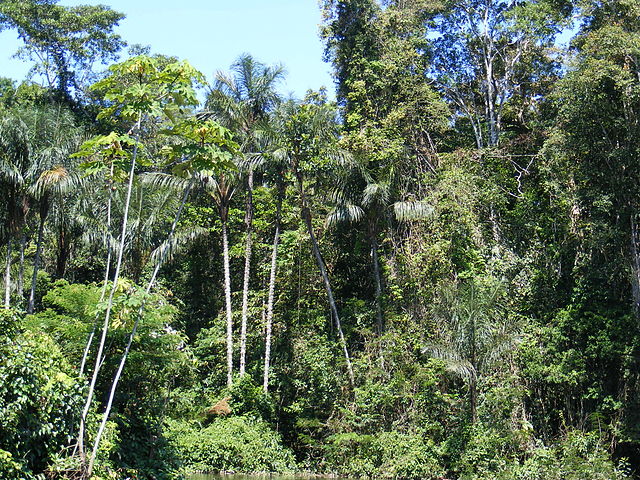 Animal life. The Terra firme forest canopy is home to such noisy and brightly colored birds as parrots and toucans and such Neotropical mammals as  three-toed  and two-toed sloths, kinkajous, silly anteaters (Cyclopes didactylus), tamanduas, spider monkeys (Ateles spp.), howler monkeys (Alouatta spp.), marmosets, and tamarins. Arboreal marsupials such as woolly opossums (Caluromys spp.) and mouse opossums (Marmosa spp.) join them. On the ground are tapirs, white-lipped and collared peccaries (Tayassu pecari and T. tajuca, respectively), agoutis, and pacas, all of which forage for fallen fruits and nuts. They are hunted by jaguars and ocelots.  Some 400 species of Eleutherodactylus frogs, disguised as dead leaves, call loudly from the leaf litter, sounding more like insects than amphibians.

Some Neotropical mammals of the forest canopy: 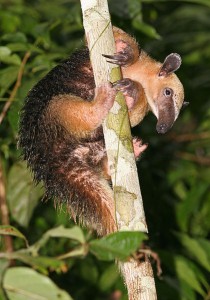 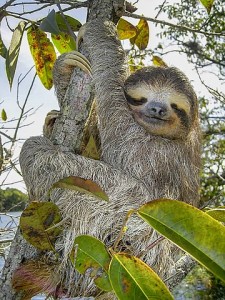 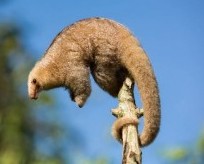 Some Neotropical mammals of the forest floor: 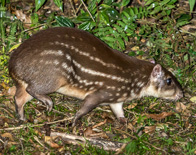 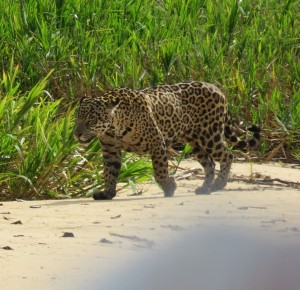 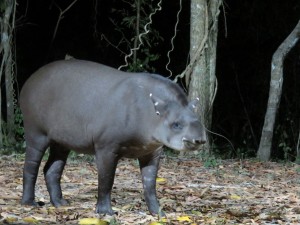 Outlook. Destruction of the Amazon Forest will have global impacts on climate as well as planet-wide biodiversity. Policy changes in 2004 in Brazil with respect to development had decreased rates of deforestation, but since 2013 deforestation has accelerated. Construction of roads opens ever more areas to settlement and resource extraction. Soils have been poisoned by gold-mining and oil exploration. Mining of iron ore results in deforestation to make the charcoal used in the production of pig iron. Illegal logging continues; and land is cleared for commercial agriculture, especially soy production and cattle ranching. Growing demands for energy have led to hydroelectric dam construction in the Amazon Basin and many more such projects are proposed. Due to the low relief of the basin, the reservoirs created by dams may cover vast areas and alter the flooding regime and sediment loads of major streams thereby affecting aquatic and riparian life.

Fires in state of Maranhão
Courtesy Ibama from Brasil
[CC BY 2.0 (https://creativecommons.org/licenses/by/2.0)]