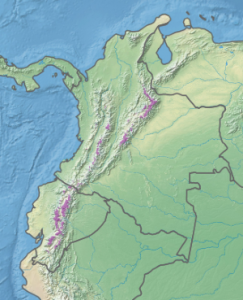 Moist alpine grasslands in the Northern Andes and in some high elevation areas of Central America occur between treeline and snowline in the Tierra Helada. Most of this uniquely Neotropical vegetation type is found in Colombia, Ecuador, and Venezuela; small patches occur in the Talamanca Range of Costa Rica, in Guatemala, and in Panama. Endemic species and genera have evolved on the isolated peaks of these montane regions.

Climate. Páramo occurs at elevations of 9,800─15,000 ft asl, where the air is thin and oxygen levels low. Solar radiation is intense and daytime temperatures may reach into the low 70s F; but at night temperatures can dip below freezing. In the morning, upslope winds carry moist air from the Pacific Ocean and Amazon Basin, in the case of the Andes, or from the Pacific and Caribbean Sea, in Central America. By midday, the highlands are usually bathed in dense fog, which causes a sudden drop to near-freezing temperatures. Alpine plants must  be able to tolerate or avoid freezing without the time to harden off that plants in seasonal climates of the mid-latitudes have. Precipitation varies according to latitude and aspect; total annual amounts range from 27 to 75 inches.

Vegetation. The most characteristic growthforms of the páramo are tussock grasses, ground-hugging mats, rosettes, cushion plants, and—in some places—giant rosettes of frailejones (Espletia spp.) and puyas (Puya  spp.—terrestrial bromeliads). Contorted trees known in Ecuador as queñua (Polylepis spp.) grow in small patches of forest. The trees stand 10-30 ft. tall. On windward slopes, which receive the most moisture, the reddish bark is papery and peals off easily. This may be an adaptation that reduces the number of epiphytes that can cling to the trunks. Polylepis often occurs at elevations above 13,000 ft asl and is one of the highest-growing trees in the world. Groves are above general treeline, perhaps a product of centuries of forest clearance and burning to extend páramo downslope in order to expand pasturage for livestock. 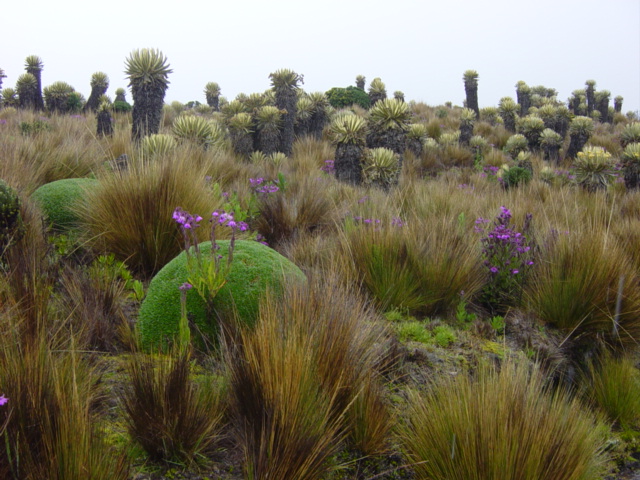 Paramo in the Nevado de Santa Isabel, Colombia. Most of the common growthforms can be seen in this photo.
Courtesy Luis Pérez from Medellin, Colombia [CC BY 2.0 (https://creativecommons.org/licenses/by/2.0)] 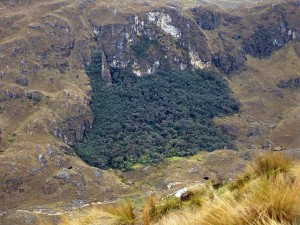 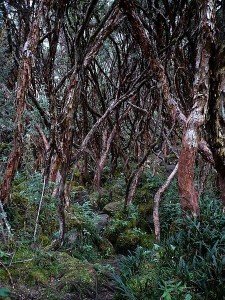 Wet páramo, dominated by tussock grasses in the genera Calamogrostis and Festuca, is the most common plant community among the several that comprise this high elevation vegetation. The ground is usually damp and spongy due to an accumulation of slowly decomposing plant material. The grasses are accompanied by dwarf bamboo, low shrubs, low rosettes, cushion plants, mosses and lichens, as well as puyas. The puyas have large basal rosettes of leaves but an inflorescence 3-4 ft tall. The species called Hercules’ club (Puya clava-hérculis) has its blue-bracted flowers embedded in a white wool to protect delicate tissues from the cold. Candlebush (Loricaria ferruginea) has leaves covered by a thick (but flammable) wax for protection, while Valeriana plantaginea produces a natural antifreeze in its tissues. 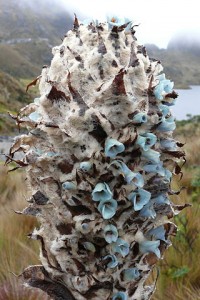 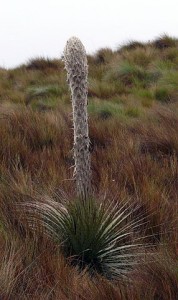 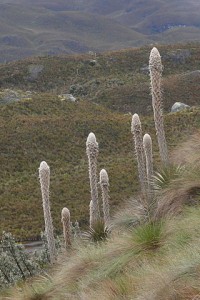 The frailejones are geographically restricted to the Andes of Colombia, Ecuador, and Venezuela. These perennial members of the sunflower family have thick trunks 3-10 ft tall topped by a large rosettes of long fleshy living leaves covered with fine hairs and large, yellow, daisy-like flowers. Dead leaves drape the stem beneath the top rosette, insulating the trunk and preventing tissue  damage from nightly freezes. Small birds, rodents, and invertebrates also find shelter in the dead leaves. 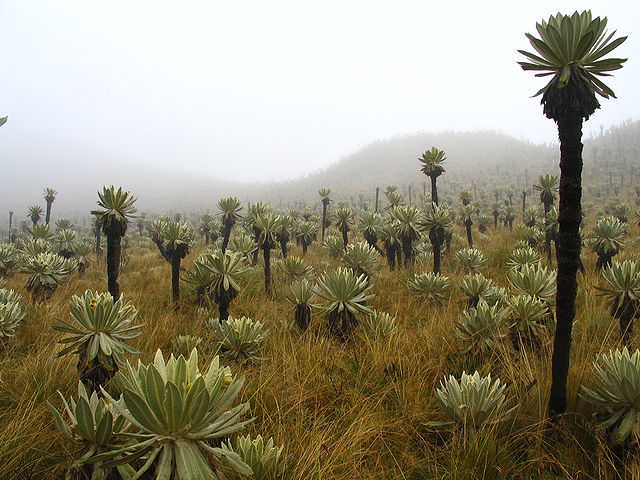 In drier areas low shrubs such as flower of the Andes (Chuquiraga jussieui) grow among low rosettes of daisies, gentians, and buttercups. Waterlogged areas host cushion plants, while rocky areas can be habitat for orchids. A superpáramo community forms just below snowline on loose scree and consists of scattered small rosettes and Azorella cushions. The cushions often sit on earthen pedestals as a consequence of wind erosion. 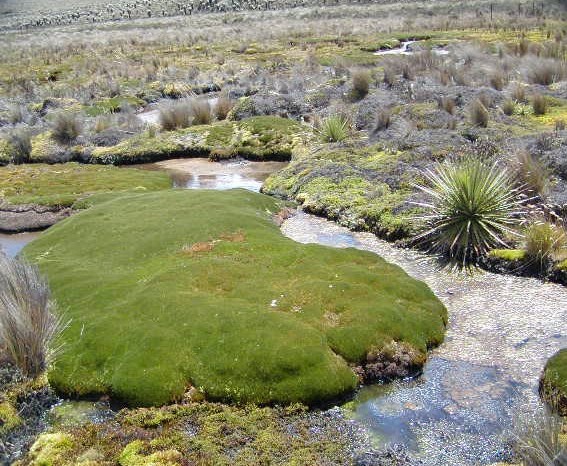 Animal life. Mammals typically have compact bodies, short limbs, and dense, dark hair. They possess a larger number of red blood cells than do lowland species. This allows them to absorb and store oxygen in the thin air. Most abundant are rodents and rabbits. Larger herbivores include white-tail deer, red bracket deer, pudú, and mountain tapir. On the dry páramo surrounding Mount Chimborazo in Ecuador, vicuña (Vicugna vicugna) graze. The rare spectacled bear (Tremarctos ornatus), an omnivore, comes onto the páramo to eat the puya inflorescences. True carnivores include shrews and long-tailed weasels. 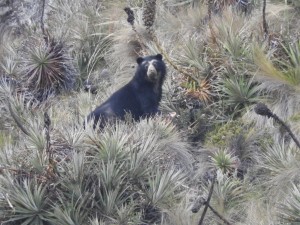 Spectacled bears feed on the inflorescences of puyas.
(public domain)

Hummingbirds are important pollinators of páramo plants. Their ability to go into torpor when at rest allows them to survive the cold of alpine nights. Above the mountain slopes, Andean condors may soar in search of carrion, their great wingspan allowing them to glide easily in the thin atmosphere. 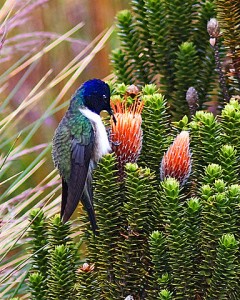 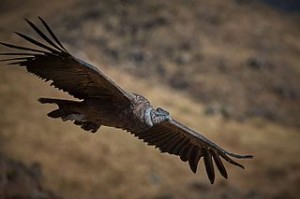 Other views of Ecuadorian páramo (photos by author) 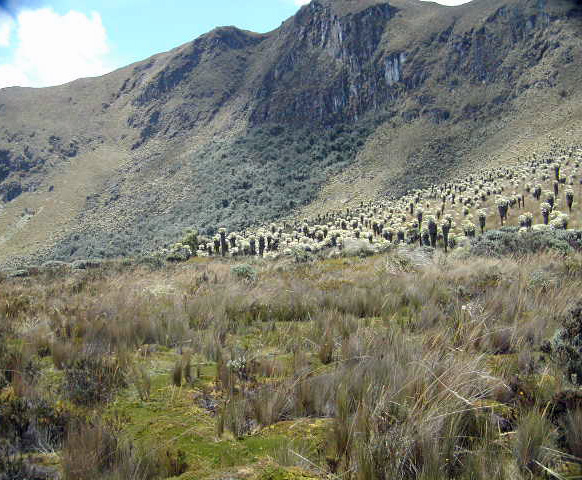 Páramo consists of a variety of plant communities. Note Polylepis forest on slope in background, frailejones at base of slope, tussock grasses and cushion plants in foreground. 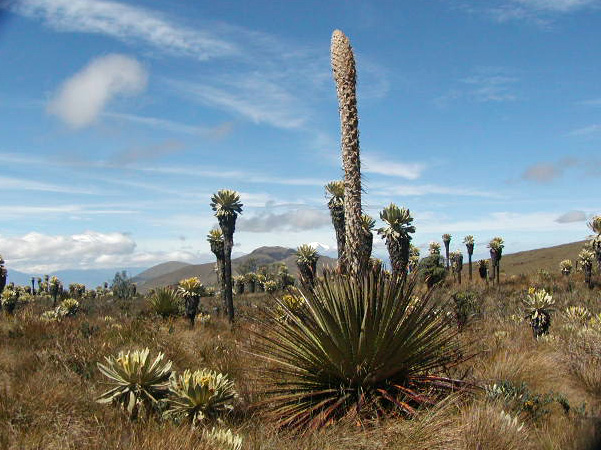