Soft-sediments (muds and oozes) dominate across the abyssal plain and in oceanic trenches. Organisms from most of the phyla and classes found in soft-sediments in shallow water situations occur in the deep but are represented by different genera and species. Foraminiferans, nematodes, tiny copepods, isopods, amphipods, polychaetes and bivalves are common members of the community. Larger animals include sea anemones, brittlestars, sea stars, sea cucumbers, and bottom-dwelling fishes. 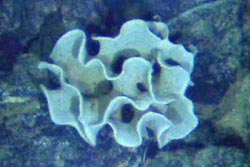 Predators are poorly known. A number of species, called croppers, are omnivores and ingest sediments, dead organic material, and live prey items. Among them are octopuses, decapods, and fishes.