The highest mountains in equatorial East Africa host a unique vegetation having growthforms that display convergent evolution with plants in South America’s páramo. These peaks include the volcanic Mt. Kilimanjaro, the highest mountain on the African continent at 19,340 ft asl; Mt. Kenya (17,058 ft asl); Mt. Elgon (14,177 ft); and Mt. Meru (14,977), all on the eastern rift of the East African Rift zone in Kenya and Tanzania, as well as the massive Virunga volcanoes of the western or Albertine rift. The highest peak in the Virunga chain is Mt Karisimbi (14,787 ft), in Rwanda. 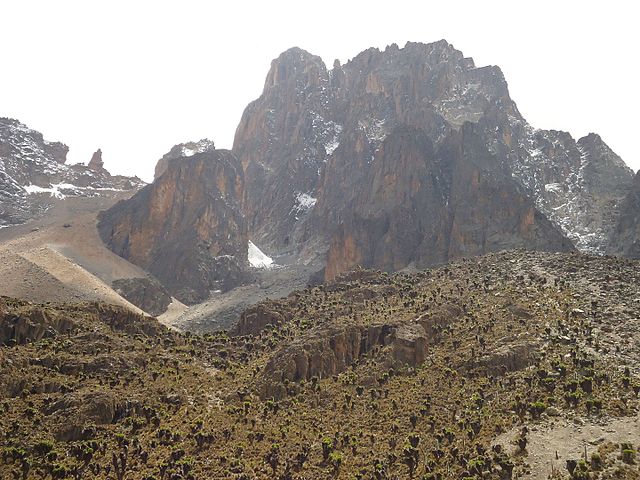 The Rwenzori Mountains—the so-called Mountains of the Moon—are also on the western rift between lakes Edward and Albert, in the Democratic Republic of the Congo and Uganda. They are fault-block mountains composed of  ancient schists, quartzite, and amphibolite. Twenty-five peaks rise above 14,760 ft asl; the highest are the twin summits of Mt. Stanley—Margherita (16,762 ft) and Alexandra (16,677 ft); Mt. Speke (16,043 ft); and Mt. Baker (15,899 ft). Rapidly shrinking alpine glaciers still cling to the peaks of these three high mountains. The remnants of mountain glaciers and snowfields are also fast disappearing from Mts. Kilimanjaro and Kenya. 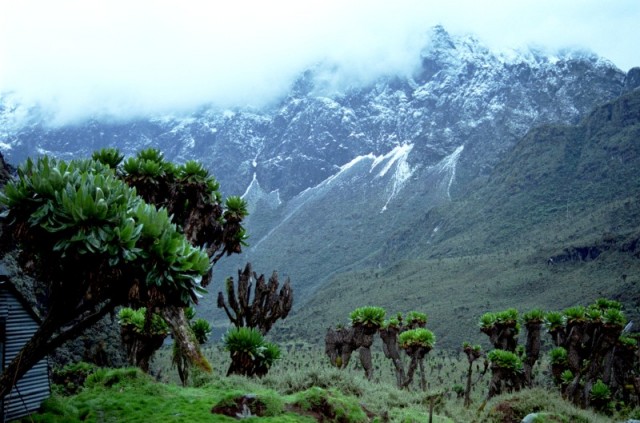 Afroalpine vegetation also occurs in the Ethiopian Highlands, a large lava plateau divided in two by the East African Rift. The general surface of the plateau is 6,500 ft asl, but rising above it are mountain chains with peaks over 9,850 ft high. The Simien Mountains in the northwest are the highest, but the Bale Mountains in the southeast contain the largest contiguous afroalpine area on the continent. (see separate section below for description).

The afroalpine flora is much less diverse than that of the Andean páramo. The mountain peaks are isolated from one another, allowing for the development of unique species on each. More than 80 percent of the flora is endemic to the East African mountains, although not all endemics are confined to the afroalpine zone.

Climate. As is typical of the equatorial region in general there are two rainy and two dry seasons as the Intertropical Convergence Zone (ICTZ) migrates between the Tropics. Winter is the driest time of year. In the Northern Hemisphere this is December through March, in the Southern Hemisphere June through August. The wettest time of year is summer: April and May in the north, November and December south of  the equator. Moisture-bearing winds come from the south and southeast and windward sides of the mountains receive more precipitation that leeward sides. Mount Kenya, which lies on the Equator, has but one dry month each year; and its afroalpine zone annually receives 35 inches of precipitation. Higher elevations on the mountain get less. Only 30 inches of precipitation fall on Mount Kilimanjaro at 12,500 ft asl and above 13,000 ft a mere 5 inches.

Even though there is daily freeze-thaw pattern, the growing season is year-long. Small seasonal temperature changes and extreme daily temperature changes are the norm. Intense solar radiation during the day, a consequence of the equatorial position and high elevation, is counteracted by the loss of infrared radiation at night, when temperatures in the afroalpine zone drop below freezing. Clouds and rain reduce the daily temperature range in the Rwenzoris to about 11° F, whereas on Mt Kenya, with its clearer skies, the range is 22°─32° F. At ground level and inside the sheaths of dead leaves on giant rosettes or inside grass tussocks, conditions may be much warmer than the surrounding air temperature.

Relative humidity varies with the fluctuating daily temperature. In early morning, the relative humidity on Mount Kenya may be 90 percent, but by midday it drops to 20 percent or less. At ground level, though, humidity remains a fairly constant 70 percent. As humidity rises again at night, dew and frost form and become significant sources of moisture for afroalpine life.

Soils. The soils derived from volcanic substrates vary according to chemistry, slope, precipitation, and the presence or absence of ash deposits. Soils tend to be acidic. Moraines exposed as glaciers retreat are common parent material.  Barren, steep slopes experience solifluction. Small soil polygons roughly 5 inches in diameter develop on ridgelines above 14,000 ft, as a result of freeze-thaw activity or dessication. 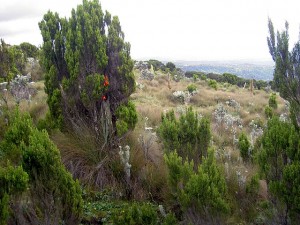 Vegetation. Altitudinal zonation of vegetation in Equatorial Africa is evident as concentric bands ascending mountains, with a montane forest of largely hardwood trees at or near the base and extending up to 8,200 ft. Often just above the forest is a bamboo (Yushania alpina) zone from 8,200 ft to 1,000 ft, followed by a heath zone that forms treeline. Heath vegetation consists of trees and shrubs of tree heather (Erica arborea), Phiippia excelsa, and P. keniensis, and Proteas 12─13 ft. tall. Often the trees and shrubs are draped with Usnea lichens. The afroalpine zone begins near the upper limits of the heath zone (approximately 12,000 ft asl) and extends to snowline at roughly 15,000 ft. The boundary between the two vegetation belts is not clearly demarcated; rather heath shrubs decrease in abundance and are replaced by giant rosettes and grasslands of short tussocks. The upper limit of vascular plants is marked by a few scattered strawflowers (Helichrysum spp.) near 16,000 ft. 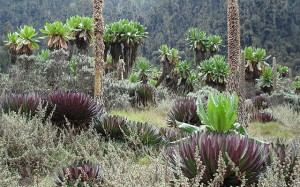 The afroalpine zone vegetation is characterized by closed cover of tussock grasses over which tower giant rosettes of giant groundsels (Dendrosenecio spp.) and the tall inflorescences of Lobelia spp. Shrubs and subshrubs such as lady’s mantle (Alchemilla argyrophylla and A. johnstonii), cabbage groundsel (Senecio brassica), other senecio species, and strawflowers as well as several forbs comprise the herb layer, while the ground layer contains low rosettes and prostrate plants.

The giant lobelias have inflorescences up to 6 ft tall. Their woody stems creep prostrate across the ground from which erect branches produce low compact rosettes of leaves. The leaves close into tight buds at night to protect the growing bud at their center.

Giant groundsels are treelike. Different species have evolved on the different mountain masses. Growthform varies with elevation, aspect and microhabitat. All, however, possess insulating layers of dead leaves hanging below the rosette and all continue to grow after flowering.

Animal life. Different species of rock hyrax (Procavia capensis) occur on the different mountains. They live in colonies and burrow in deep holes among the rocks, where temperatures remain above freezing. Hyrax feed on forbs, grasses and mosses, but do not consume plants close to their burrows thereby helping to conceal the openings. The small senecio S. purtschelleri commonly grows in hyrax colonies on dung-enriched soil. Afroalpine vlei rats (Otomys orestes) dig their burrows at the bases of giant groundsels or tussock grasses. The geographically widespread common duiker (Sylvicapra grimmia altivallis) can be found browsing on lady’s mantle and other shrubs in the heath zone and among giant groundsels. 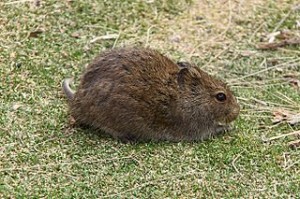 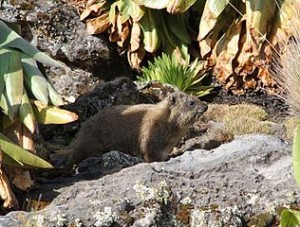 Predators, preying primarily on rock hyrax, include raptors such as Verreaux’s Eagle (Aquila verreauxii) and the Lammergeier or Bearded Vulture (Gypaetus barbatus), and occasionally wild dogs and leopards. 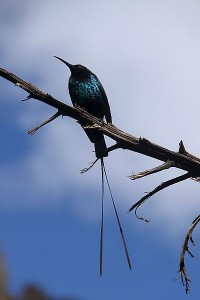 The Scarlet-tufted Malachite Sunbird (Nectarinia) is one of the most common birds in the afroalpine zone of Mt. Kenya, where it breeds year round, living in the leaf girdles of giant groundsels. With its long bill it can extract nectar from the tubular lobelia flowers and feeds on flies and other insects living in the inflorescences. The sunbird, an example of convergent evolution with high Andean hummingbirds, lines its nest with hairs stripped from senecio leaves. The Hill Chat (Pinarochroa sordida)is another bird commonly living in the dead leaves of giant groundsels. This Old World Flycatcher consumes carabid beetles, weevils and spiders from the ground and from the leaves of senecios and lobelias.

The only reptile resident in the zone is the alpine meadow lizard (Adolfus alleni), endemic to Mt. Kenya, Mt. Elgon, and the Aberdare Range of Kenya.

Afroalpine Zone in the Ethiopian Highlands

The Ethiopian Highlands are the largest mass of uplands in Africa and host a a unique afroalpine biota. This vast plateau is formed from a thick flood basalt eroded into a rugged mountainous terrain with steep cliffs, pinnacles, and deep gorges. It is divided in two by the northern end of the great East African Rift. Elevations range from 5,000 to more than 14,750 ft asl. Extinct shield volcanoes rise above the plateau, forming high mountains in each section. The Simien Mountains (also spelled Semien and Simen) in the northwest section contain the highest peak in Ethiopia: Ras Dashen or Ras Dejen is 15,158 ft asl. The Bale Mountains in the southeast section have at least six mountains over 13,800 ft high; Tullu Dimtu at 14,229 ft is the second highest peak in Ethiopia. 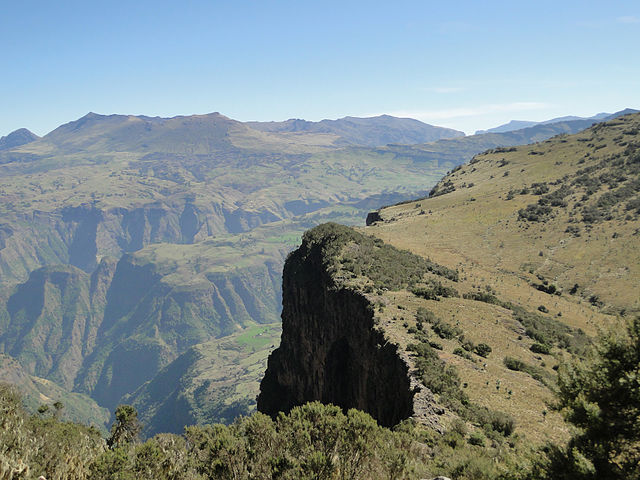 Climate. The Highlands are under the influence of the annual migration of the Intertropical Convergence Zone (ICTZ) and the Asian monsoon. From May to October the Southeast Trades bring precipitation to the south-facing slopes. During the winter the northeast monsoon brings dry air from the Red Sea and blows more or less parallel to the coast of the Horn of Africa, missing the Highlands and bringing drought. Annual precipitation totals vary depending on location. On average, about 62 inches of rain are received; a maximum of about 98 inches occurs on southwestern scarps.

Due to high elevation, the temperature regime is that of a subtropical climate, although the area lies in the  tropics. At elevations above 10,000 ft frost is common. On the Sanetti Plateau in the Bale Mountains, a maximum daily high of 79° F and a low of 5° F was recorded on the same day.

Vegetation. The afroalpine zone occurs at elevations above 10,000 ft and is characterized by low-growing shrubs, mostly heaths 2─3 ft tall, strawflower (Helichrysum citrispinum) scrub, and tussock grasses. Tree heather (Erica arborea) and Philippia shrubs occur as treeline. Some of the cold-hardy plants of this misty moorland have thick, leathery leaves; others have small leaves or leaves with the margins rolled to the underside. Above 12,000 ft sedges (Carex spp.) and fescue grasslands dominate in an open “forest” of giant lobelias. Gigantism as an adaptation to cold is a strategy of some plants. The giant groundsels so spectacular on the equatorial mountains of East Africa (see above) are absent, but giant lobelias (Lobelia rhynchopetalum and L. gibberroa) can have flower stalks that stand nearly 20 ft tall. Giant St. John’s Wort (Hypericum revolutum) attains heights of 40 ft, whereas in other parts of the world the genus contains only forbs and shrubs. Overall plant diversity is lower here than in the equatorial afroalpine floras. 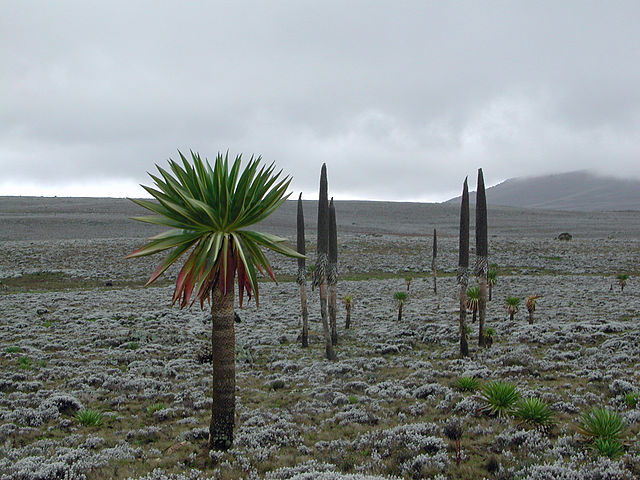 Animal life. The endangered and endemic Ethiopian wolf (Canis simensis) hunts in the afroalpine zone, where it preys upon giant mole rat (Tachyoryctes macrocephalus), grass rat (Lophuromys melanoyx), and Stark’s hare (Lepus starki). A number of rodents, including the two just mentioned, are endemic to the Ethiopian afroalpine zone. An interesting endemic denizen of the cold moorland in the Simien Mountains is the gelada baboon (Theropithecus gelada). Not a true baboon, but closely related, it is the only primate that consumes grasses and seeds as the chief food sources. They will also eat flowers, roots, and rhizomes. Geladas live in large troops that can number in the hundreds and forage by day in the alpine grasslands and sleep at night on ledges on precipitous cliffsides. 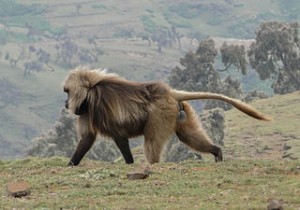 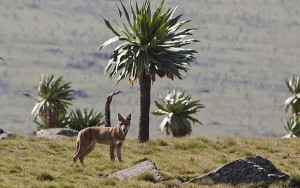