The temperate rainforests of South America evolved in isolation from those of North America and are characterized by broadleaf trees, especially members of the genus Nothofagus, the southern beeches. One third of woody species are endemic to the region. The forests occur in a narrow band on the Coastal Range and windward slopes of the Andes from roughly 36° S southward into Tierra del Fuego. The coastal cordillera rises 3,300 ft asl; while the southern Andes are about 10,000 ft at 35° S but only about 3,000 ft asl in Tierra del Fuego.  South of 42° S the coastal mountains fragment into numerous islands, including Chiloë and the Chonos Archipelago, and then merge with the Patagonian Andes. Snow-capped volcanoes are conspicuous elements of the landscape, and glaciers dating to the Pleistocene remain on the higher Andean peaks. Glacial troughs and fjords, deep bays and a multitude of islands mark the highly dissected southern coastline.

Climate. The marine west coast climate is comparable to that of North America’s Pacific Coast rainforest.  Where still under the influence of a mediterranean regime, summers are warm and dry and annual precipitation totals less than 80 inches. South of 40° S, summers are cool and rainy and wind becomes a factor. Under the year round influence of prevailing westerly winds and orographic uplift, total precipitation varies from almost 100 inches to just under 200 inches a year. Winter precipitation high in the mountains comes as snow. Snowline occurs near 2,600 ft asl around 40° S, but declines to sea level at 55° S.

Soils. Soil development is impacted by volcanism in the southern Andes. Deep ash layers are common and andosols are the most prevalent soil type. In the Valdivian forest podzolics derived from metamorphic rocks are also common.

Vegetation. Temperate rainforest begins at the southern border of Chile’s mediterranean scrub-type vegetation or mattoral as a warm-temperate forest of deciduous Nothofagus dominated by roble (N. obliqua), which like most of the southern beeches has small, hard leaves (i.e., are lauriphyllous).

From 37°45′ S to 43°20′ S, the Valdivian temperate rainforest grows. Roble is shares dominance in the canopy with evergreen broadleaved trees such as the laurels (Laureliopsis philippiana and Laurelia sempervirens), lingue (Persea lingue), ulmos (Eucryphia cordifolia), olivillo (Aextoxicon punctatum), and tineo (Weinmannia trichoosperma), as well as conifers including the cypress, Pilgerodenderon uviferum, and podocarps such as Saxegothea conspicua, Podocarpus saligna, and P. nubigena. This forest has a multistoried canopy and abundant epiphytes.  Above 1,000 ft asl, stands of tall alerce (Fitzroya eupressoides) grow as do forests of evergreen coihue (N. dombeyi). Nearly impenetrable bamboo (Chusquea culeou) thickets dominate the understory. These bamboos rise 10─15 ft. above the forest floor. 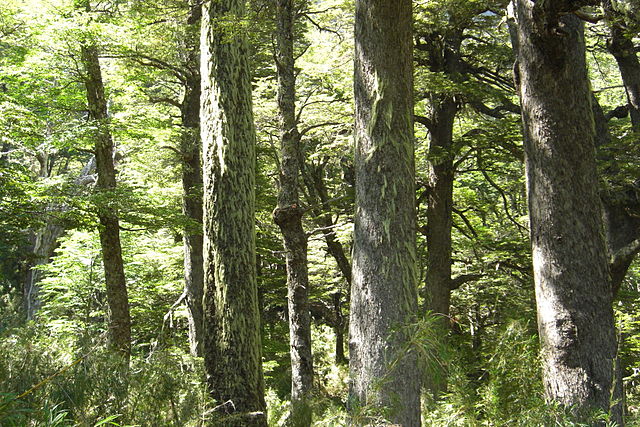 Alerce is the largest and longest-lived conifer in South America, reaching heights greater than 160 ft and living more than 3,000 years. It grows at elevations from 300 ft to 4,000 ft asl in the areas of highest precipitation. It prefers nutrient-poor and poorly drained soils. 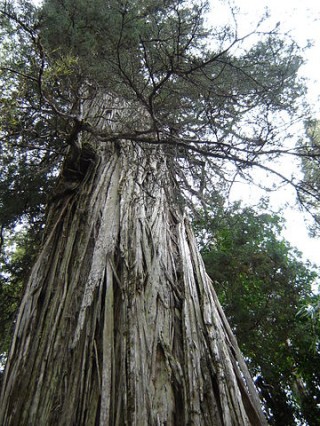 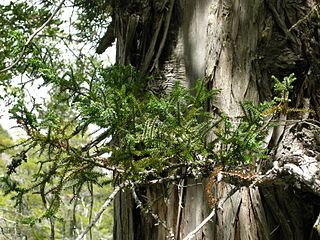 The completely evergreen Patagonian Rainforest immediately south of the Valdivian (43°30′ S to 47°30′ S). The Patagonian rainforest is less diverse than the Valdivian, but has many of the same tree species. Common canopy trees are evergreen southern beeches: coihue (Nothofagus dombeyi), Chiloe’s coihue (N. nitida) , and Magellan’s beech (N. betuloides). Coihue is the tallest South American Nothofagus and stands more than 165 ft tall. Bamboos are the dominant plants of the understory.

South of 47°30′ S and the Gulf of Peñas, on the mainland and inner islands offshore, is the Magellanic rainforest, a subpolar deciduous forest  dominated by lenga (N. pumilio) and ñirre (N. antarctica). This area is colder than regions to the north and experiences no summer drought. In older forests on both sides of the Andes, the monkey-puzzle tree (Araucaria araucana) grows at elevations above 3,300 ft asl. These Araucarias can live 2,000 years. Outer (western) islands are covered with Magellanic moorlands of heath shrubs, scattered Magellan’s beech (Nothofagus betuloides), and bogs.

Parallel to all three rainforests described above, primarily on the eastern slopes of the Andes in Argentina, is a cool temperate Nothofagus forest dominated by evergreen N. dombeyi and in drier sites at higher elevations deciduous lenga (N. pumilio) and ñirre (N. antarctica). Conifers include alerce and Chilean incense cedar (Austrocedrus chilensis).

Natural disturbance factors in the South American temperate rainforests are include earthquakes and volcanic eruptions. Both of these can trigger landslides, natural fires, and flooding. Araucaria forests are  mostly restricted to volcanic areas. Disturbed areas are usually colonized by shade-intolerant southern beeches.

Animal life. Endemism is high among all vertebrate groups. Darwin’s frog (Rhinoderma darwinii), on the verge of extinction, is known for its unusual breeding strategy in which the male broods developing young in his vocal sac. Some 60 percent of reptiles, 30 percent of birds, and 20 percent of mammals are endemic to these forests. Two charismatic birds, the large Magellanic Woodpecker (Campephilus magellanicus) and the rufous-legged owl (Strix rufipes) are restricted to old growth  Among the endemic mammals are two marsupials, the Chilean shrew opossum (Rhyncholestes raphanuras) and the tiny “monito del monte” (Dromiciops gliroides), which weighs less than 2 ounces and has a body length of 3─5 inches. Among mammals considered “focal species” by conservation ecologists are Patagonian huemal (Hippocamelus bisulcus), southern river otter (Lutra provocat), and the kodkod (Leopardus guigna), the smallest cat in the Americas. The smallest deer in the world, the southern pudú (Pudu puda), inhabits the forests of southern Chile. 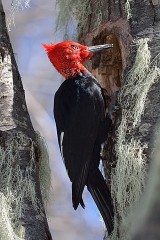 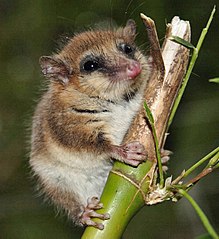 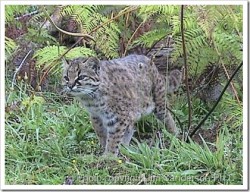 The forests (and their animal inhabitants) are threatened by forest clearance. An estimated 60 percent has been lost to conversion to agriculture and tree plantations of introduced eucalypts and Monterrey pine (Pinus radiata). In addition, intense logging of alerce and Pilgerodenderon uviferum for timber and other trees for firewood has reduced and degraded forests. Facing extinction are 71 percent of amphibians, 31 percent of reptiles, 25 percent of birds, and 81 percent of mammals. In addition 84 percent of freshwater fishes in streams and lakes are vulnerable to the consequences of forest clearing.