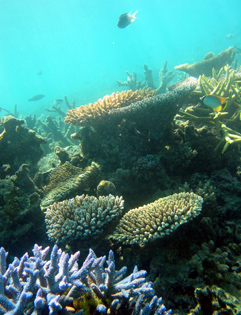 Known for their extremely high biodiversity, coral reefs are formed by living stony coral polyps and coralline red and green algae. Over thousands of years, a limestone structure builds up in warm, clear tropical or subtropical water. It is estimated that at least 100,000 marine animal species from almost every phylum live on tropical reefs, including 1,500 kinds of stony coral.

Coral reefs are found in shallow water where sea surface temperatures range from 68° F to 97° F.More than 90 percent of the world’s coral reefs occur in the Indo-West Pacific biogeographic region. Reef systems also can be found in the West Atlantic, East Atlantic, and East Pacific oceans between 30° N and 30° S. Most reef species are endemic to the region in which they are found.

Coral reefs have existed for some 100 million years, but most living reefs originated or renewed their growth at the end of the Pleistocene (about 10,000 years ago), when sea levels rose in response to melting continental ice sheets.

The windward reef front is exposed to waves from the open ocean that bring a constant supply of plankton and nutrients and so most growth of polyps and coralline algae occurs there. The inner lagoons have soft-sediment floors and are prime habitat for seagrass meadows and the wealth of animal life they host.

Stony corals are colonial cnidarians. Adult polyps look like miniscule anemones with their numerous tentacles surround a single opening to the sac-like stomach. Each polyp secretes calcium carbonate from its base to form a cup in which it resides. The limestone exoskeleton grows upward as the polyp releases itself from the base and secretes more calcium carbonate to form a new base plate. The polyp can withdraw its tentacles and hide in the cup when threatened. Reefs grow upward at a rate of abut 10 feet every 1,000 years.

The colony itself grows in population size by asexual reproduction. Indiviudal polyps divide into two new, genetically identical polyps. The two remain connected by a thin tissue that lies above the limestone cup in which they sit. Thousands, even tens of thousands, of individual polyps may make up a colony in which neighboring polyps are connected. 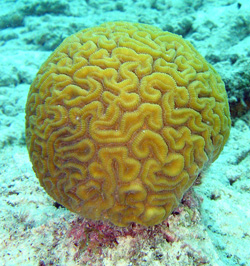 The variety of physical forms assumed by colonies create much of the fascination and beauty of coral reefs. Some are branching types, others are fan-shaped, still others form columns or flower-like whorls. Massive corals may look like brains or barrel cacti. The more sheltered an area of the reef the greater the variety of forms.

Corals also undergo sexual reproduction to ensure genetic diversity and to disperse to new sites. In many species individual polyps are hermaphroditic, producing both eggs and sperm. Fertilization in most species occurs once the gametes have been released into the water. Mass spawnings are characteristic and ensure games of the same specie find each other. Coral larvae (planulae) swim to the light and become part of the plankton. Currents disperse them to new sites, which if they encounter hard surfaces and coralline algae, they will settle and metamorphose into polyps.

Polyps may capture food items with stinging cells (nematocysts) on their tentacles or by filtering the water. Sticky mucus traps viruses, bacteria, and organic debris; and hairs on the tentacles move the particles toward the mouth. The mucus dries out periodically and is shed. This allows the polyp to rid itself of waste. 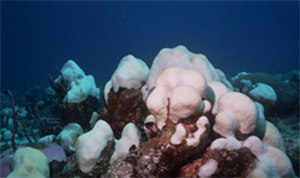 Corals also host symbiotic algae (zooxanthellae) in their guts. These are primariy dinoflagellates of the genus Symbiodinium. The algae are photosynthetic and any excess sugars or other compounds that they produce go to the polyp. The photosynthetic pigments in zooxanthellae determine the color of the coral, as well as the depths at which they can grow. When corals are severely stressed they eject the algae, “bleaching” the reef.

The clear tropical waters required by stony corals are clear because they are deficient in nutrients. Paradoxically, coral reefs growing under these conditions, are among the most productive ecosystems on Earth. This is possible, in part, because of complex food webs and tight recycling of nutrients.

Red and green coralline algae are the most important primary producers on a reef. Other macroalgae—noncoralline algae—form turfs and are also important. Phytoplankters play a minor role in grazing food chains, but their leaked DOM is significant in detritus food chains.

The zooplankton is made up mainly of crustaceans: mysids, ostracods, isopods, amphipods, and copepods, although formaniferans and polycheates are also abundant. Most are detritivores.

Larger invertebrates comprise the benthos, including a number of sessile cnidarians other than stony corals, including soft corals, black corals, and sea anemomes. Sponges, bryozoans, gorgonians, and ascidians also attach to the reef, often at depths below that required by the stony corals. These sessile organisms may be detritus feeders, suspension feeders, or predators. 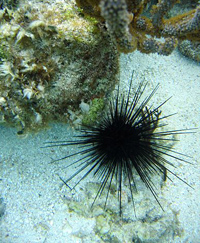 Long-spined sea urchins play a major role in maintaining reef habitat diversity. These nocturnal grazers of the algal turf crop and open the turf, creating space for filamentous algae and for coral larvae to settle. When disease killed off the urchins on Caribbean reefs in the 1980s, the coral reefs turned into algal reefs with a thick turf and dominance of rubbery brown algae. Coral colonies died out as the macroalgae spread and have not yet recovered. 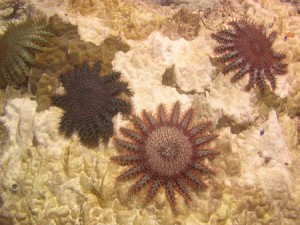 In the Indo-Pacific region crown-of-thorns starfish feed on the polyps; and, when their numbers are high, destroy reefs. Since the 1950s several times irruptions of this echinoderm have spread across the Pacific, killing off coral reefs in their path. Recovery can occur, but may take 10-15 years and is delayed until the arrival and settline of planulae. For a time the reef is a patchwork of dead and recovering coral. It takes much longer for original biodiversity levels to be achieved.

Brightly colored and distinctly patterned fish abound on the coral reef. Some 4,000 species from 100 families of fish have been recorded to date. Many are global in their distribution, unlike coral species. Strict reef-dwellers include damselfishes, parrotfishes, wrasses, rabbitfishes, surgeonfishes (tang), Moorish idols, butterflyfishes, and angelfishes. Most are herbivores. Blennies, gobies, grunts, and mouth-brooding cardinalfishes are also abundant, but not restricted to reefs. Nocturnal-feeding squirrelfish, groupers, and snappers are common larger predatory fish of the reef ecosystem.

Few fish feed on living coral polyp, but among those that do are butterflyfish, triggerfish, and pufferfish.

The abundance of life on a reef attracts open sea fish such as jacks, barracudas, sharks, and rays. They prowl the outer reef, where they find not only prey but also cleaner fish, usually wrasses. 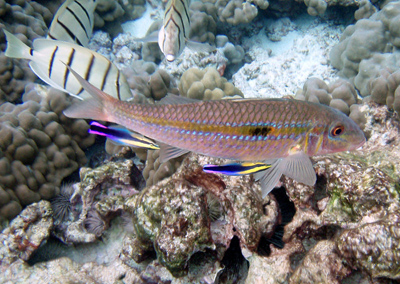 Cleaner wrasses on a goatfish

Breaking down the limestone of the reef are a group of organisms called bioeroders. Some—such as polycheates, Lithotyria barnacles, and Lithophaga bivalves—bore into the reef, using enzymes to fracture the stone into small chips. Working away on the coral from the outside are chitons, urchins, limpets, hermit crabs, pufferfish, and parrotfish. On a healthy reef, growth keeps ahead of destruction.

Note: This page has been translated into Slovak by Margareta Sliwka at https://www.zoobio.fr/edu/2019/04/18/koralove-utesy/.