The Pantanal is the largest wetland in the Neotropics and is considered by some to be the largest contiguous freshwater wetland on earth. It covers an area estimated to be between 54,000 and 81,000 square miles, an area greater than the state of New York. Most of it (approximately 75 percent) lies in west-central Brazil south of 16° S. From there it extends westward into Bolivia and Paraguay. (Pântano is a Portuguese term referring to swamp or marsh.) The eastern margin is defined by the edges of several plateaus associated with the Brazilian Highlands. 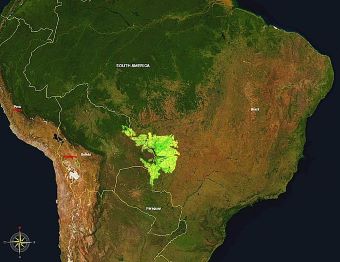 This vast wetland has developed in a structural basin formed as the Andes Mountains rose. Today it is a land of coalescing alluvial fans and the inland deltas of 10 large rivers that merge with the floodplain of the Paraguay River with its sand bars, oxbow lakes, meander scars. Ancient sand dunes now form raised, often forested patches in the generally flat, low-lying region. Most of the Pantanal lies at elevations between 250 and 660 ft asl and is vegetated ed by grasslands and wooded savanna (cerrado). The climate is tropical wet and dry (Aw in the Koeppen system); most of the basin’s 32–48 inches of annual precipitation falls in austral summer between March and October, creating an annual flood that dominates life patterns. 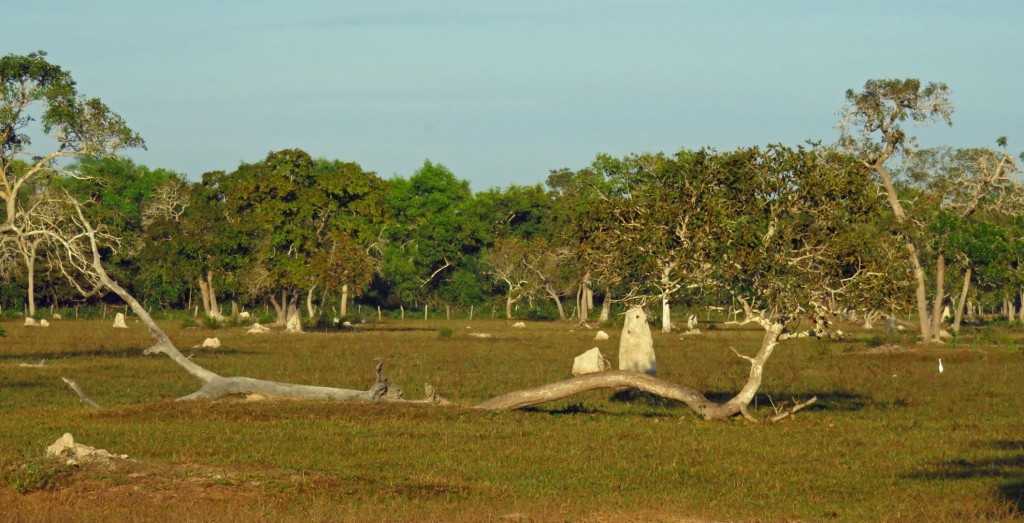 As a consequence of the low gradient in the basin, water moves slowly and it can take floodwaters 6 months to build from the northern edge and reach the southern limits of the wetland. Maximum flood in the north may occur in February and not until June in the south. Nearly the entire area is inundated as floodwaters rise up to 16 ft. As the dry season progresses, these water rapidly recede, and the submerged and aquatic plants of the flood are replaced by terrestrial forms. Water remains in the deeper channels and shallow pools, where fish and other aquatic animals become concentrated, attracting thousands of birds to the Pantanal.

Natural levees and other raised areas that remain above the flood support gallery forests of tropical semideciduous or deciduous trees, including kapok. Palms are also conspicuous components of this vegetation. Lakes and ponds dot the interfluves and often have floating mats of water hyacinth and water lettuce and emergents such as pickerel weed, bulrush, sedges, and cattail. They are rich in invertebrates such as isopods and amphipods and insect larvae. 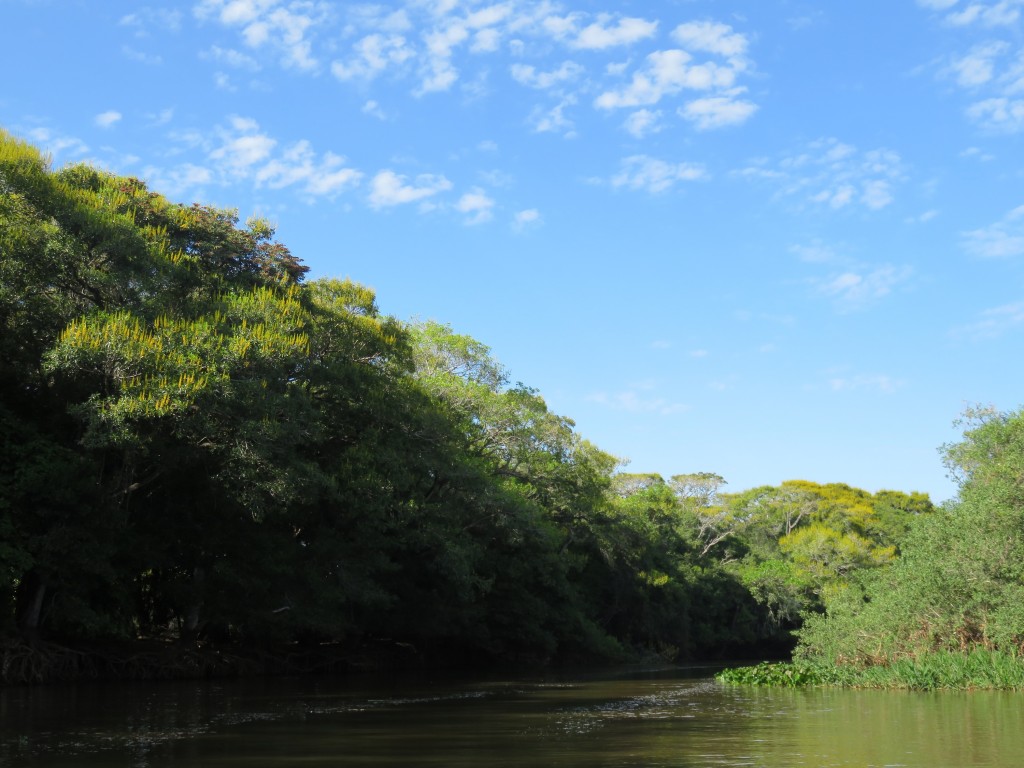 Gallery forests line the waterways and provide a variety of habitats for the rich fauna of the Pantanal.

Larger animals found in the Pantanal include at least 170 reptilian species, including the yellow anaconda, jacare caiman, and the Argentine black and white tegu. 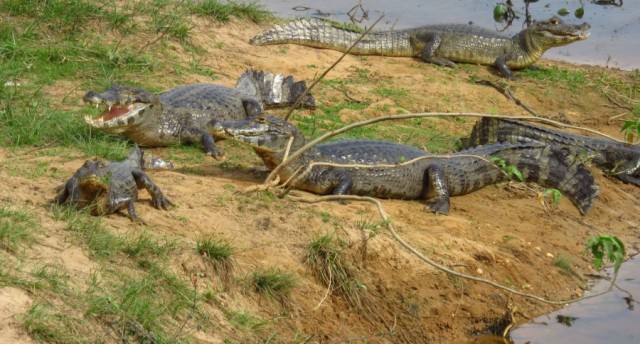 Jacare are abundant and easily seen on the banks of ponds and along the many waterways.

Black and white tegu lizards may grow to 4 ft long. These omnivorous reptiles are partially warm-blooded and able to maintain body temperatures higher than the ambient temperature at night.

The area is a birder’s paradise with an estimated 400-800 species inhabiting the wetland at least seasonally. The Pantanal is famous for its large numbers of migratory water birds, among which are the 4.5 ft tall jabiru stork, wood storks, a variety of herons, the sun bittern and sun grebe, and flashy kingfishers. The gallery forests are home to parrots, woodpeckers, and vast array of neotropical endemics. The large Hyacinth Macaw, once an endangered species, is making a comeback with the help of conservation-minded ranchers who have planted their favorite palms.

The Jabiru is the iconic bird of the Pantanal. This stork builds in nest of twigs in trees and on other high perches. 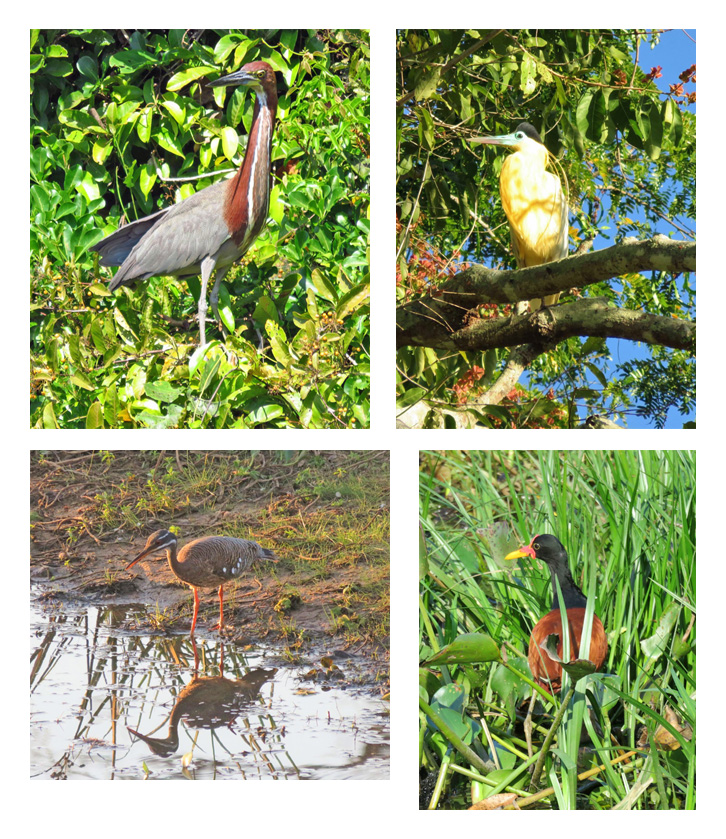 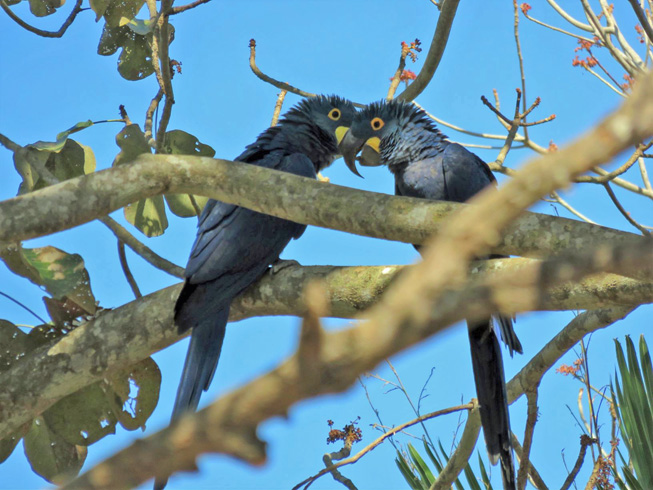 The iconic Hyacinth Macaw once faced extinction but is now making a comeback.

More than 100 species of mammals have been recorded in the Pantanal, including the world’s largest rodent, the capybara, both collared and white-lipped peccaries, the South American tapir, giant anteater and the smaller, arboreal tamandua, two monkeys, and charismatic predators such as jaguar, ocelot, and giant otter. 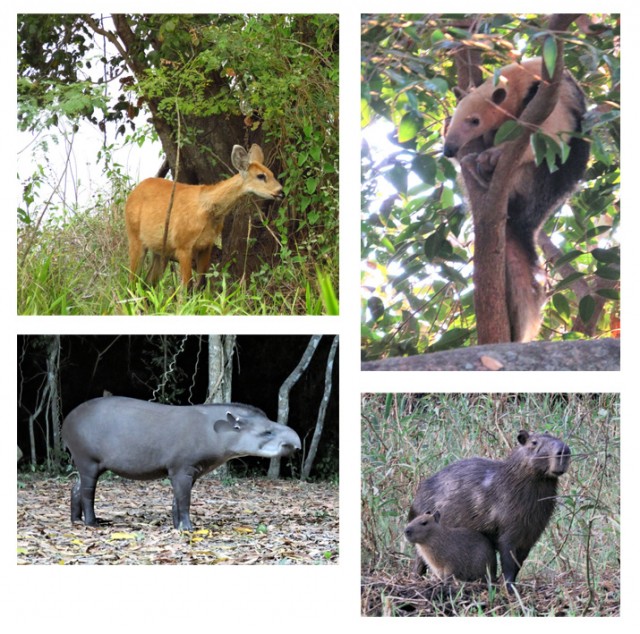 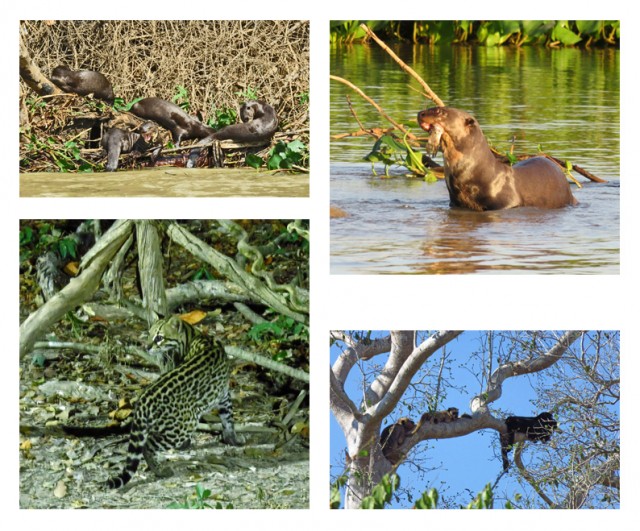 Giant otter (top left and right) inhabit the rivers; while ocelot (bottom left) seek prey on land. Howler monkeys (bottom right) are one of only two monkey species found in the Pantanal. 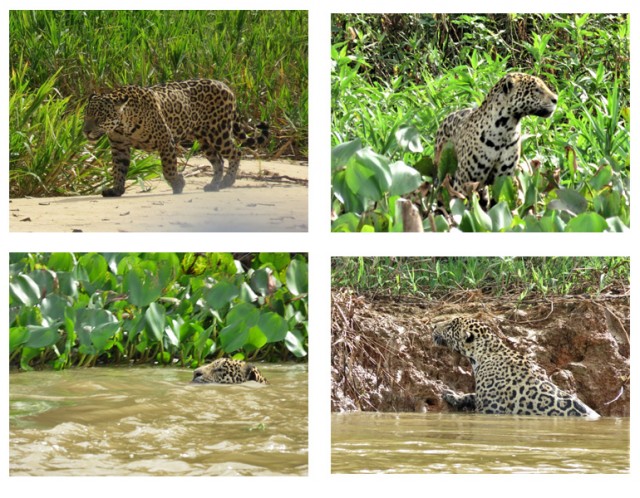 Jaguars are the largest carnivore in the Pantanal. They hunt on land and in the water.

The Pantanal is threatened by drainage projects promoting ranching and farming, fragmentation by roads, proposed hydroelectric projects on tributary rivers, and other types of development. At present, the profits from ecotourism are encouraging conservation efforts to combat these forces. There are a few parks and preserves, including one for jaguars. The traditional land use has been ranching and this continues, often with ecotourism as an ancillary commercial activity. White zebu cattle are still moved in search of water and pasture by cowboys, often on muleback, as they have for hundreds of years. 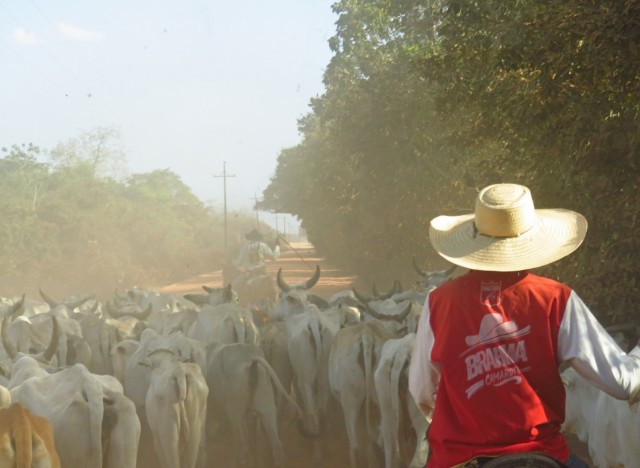 A unique breed of horse, the Pantaneiro, represents 200 years of selection and adaptation to the wetland’s environment. Pantaneiro horses’ hooves tolerate standing in water for long periods of time, and they are able to graze with their noses submerged. In addition they are said to possess front traction unlike other breeds, to be intelligent and docile, and to have good cow sense 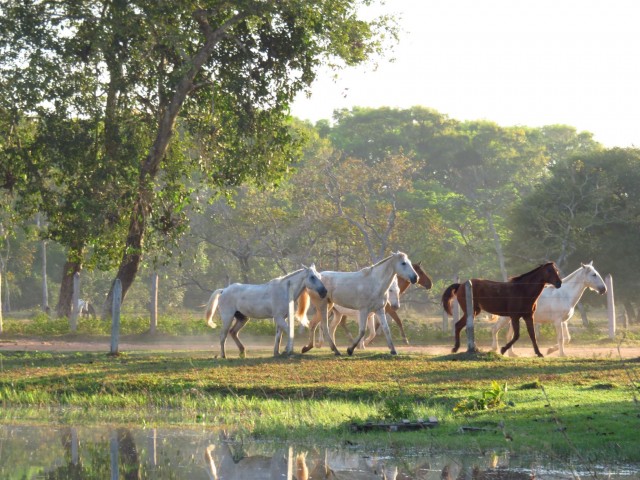