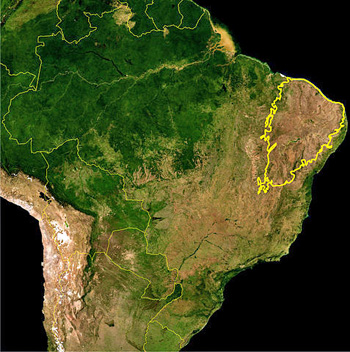 The Caatinga of Northeast Brazil is South America’s largest seasonally dry tropical forest. In Brazil it is considered a distinct biome or phytogeographic domain, one of six in the country (others being the Amazon Forest, the Atlantic Forest, the Cerrado, the Pantanal, and the Pampa). Covering some 330,000 sq mi in the backlands or sertão, this thorn-scrub is associated with the deeply weathered crystalline shield of the Brazilian Highlands and overlying Paleozoic sedimentary rocks. The Caatinga, a term meaning “white forest” in Tupi-Guarani and referencing the appearance of the leafless trees and shrubs during the long dry season, extends from roughly 3° S to 17°50′ S. The word refers to both the region and the characteristic vegetation.

Soils developed on this landscape of low plains and plateaus are generally shallow. Drainages are primarily ephemeral streams that only occasionally and for very short periods of time have flowing water. The only permanent stream is the exotic São Francisco River. Rainfall is seasonal and highly unpredictable from year to year, since moisture-bearing easterly trade winds off the Atlantic are blocked by the Borborema escarpment. The shape of the coastline also affects precipitation; in the north the coastline parallels the flow of the predominant trades, an orientation that largely prevents onshore movement of moist air masses. Inland, distance from the sea also diminishes annual rainfall amounts. Usually 12-40 inches of rain falls during a 3-5 month wet season. During El Niño years, the rains may fail altogether. Severe droughts occur every 30-40 years. In the past, before water impoundments and improved transportation networks were developed, these droughts triggered now legendary mass migrations of inhabitants to wetter coastal areas.

Caatinga vegetation comprises a variety of plant communities that reflect the mosaic of soil types and rainfall amounts. Most extensive is a dense, largely deciduous forest of trees and shrubs 15-20 tall. Species of the pea or legume family (Fabaceae) are abundant. Of 11 woody species dominant over much of the vegetation region, two are endemic: the buckthorn juazeiro (Ziziphus joazeiro) and the euphorb known as favela (Cnidoscolus quericifolius). Large arborescent cacti such as mandacaru (Cereus jamacaru) are scattered among the woody plants; tough, spiny terrestrial bromeliads grow on the ground. Brazilian bottle trees (Ceiba glaziovii and Cavanillesia umbellata) or barrigudas dot the landscape in some places; during the rainy season their trunks swell with stored water. On rock outcrops, a sprawling, multi-branched cactus known as xique-xique (Pilosocereus gounelleri) is accompanied by turk’s cap cactus (Melocactus zenthneri), an endemic prickly pear cactus (Tacinga inamoema), and sometimes large numbers of Encholirium spectabile, an endemic terrestrial bromeliad. 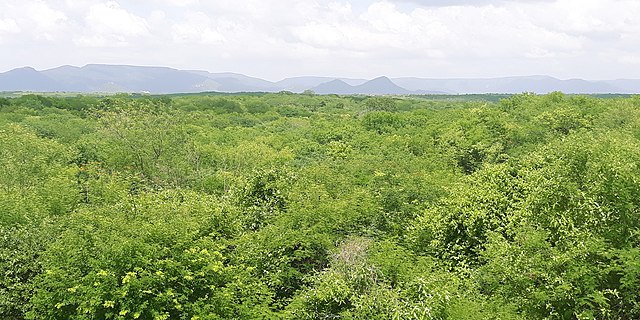 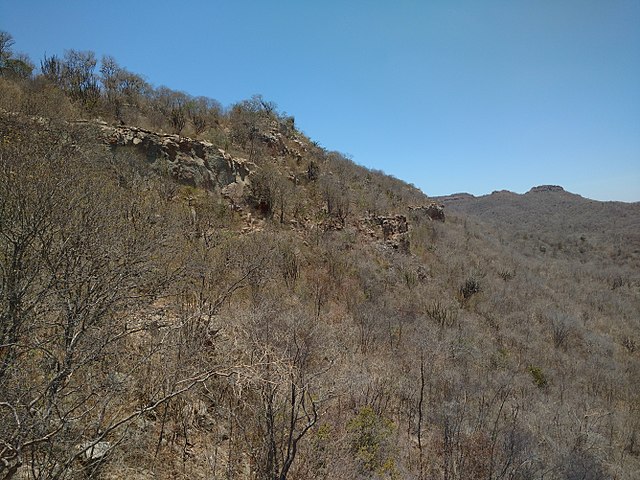 Within the Caatinga region there are wetter areas with different vegetation types. In the east, just above the Borborema escarpment, is an agreste-type caatinga with trees up to 35 ft tall. Orographic precipitation generated on isolated high elevations (brejos) supports an evergreen tropical rainforest with plants related to those of the Amazon rainforest. Depressions with heavy alluvial soils and high water tables host carnauba palms (Copernica spp.).

The caatinga flora is species-rich with some 1,500 species recorded and includes at least 318 endemic species and 18 endemic genera. Few adaptations to drought other than the deciduous habit occur among the woody plants. The water storage capability of barrigudas is one; the water-storing tuber of Brazilian plum or umbo (Spondias tuberosa) is another.

The animal life of the Caatinga was poorly known until recent decades, when research efforts, especially by Brazilian scientists, greatly increased our knowledge of its highly diverse vertebrate fauna. Perhaps surprisingly, the most diverse vertebrate group are fishes, with 2,587 endemic freshwater species. Of particular interest are the rivulids or South American killifishes. These are typically annual fish with a life cycle that includes drought resistant eggs and delayed embryonic development with as many as three diapauses or periods where growth and development is temporarily suspended. These adaptations let them survive in seasonal ponds that completely dry up during the dry season.

Reptiles and amphibians are still not well studied. Currently the herptofauna is known to contain 175 species, 12 percent of which are endemic.

The Caatinga is considered a center of endemism for South American birds. Somewhere around 400-500 species are reported. the lower numbers counting only those inhabiting the dry forest areas, the higher including the brejos and other habitat types. 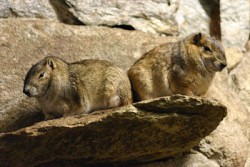 Once believed to be relatively depauperate in mammal species, the number of species now recorded (156) is greater than in the Pantanal or Gran Chaco (but still fewer than in the Amazon or Atlantic Forest). Before the 1990s, the rock cavy or mocó (Keradon rupestris) was thought to be the only endemic mammal, but 12 more rodents have been added to the list since then as have one primate (the critically endangered blonde titi, Callicebus barbarabrownae) and two bats.

Little of the caatinga remains undisturbed. Traditional land use in the sertão  by European settlers involved cattle and goat raising, which contributed to overgrazing. The agreste region was used for farming. Both areas supplied the sugar plantations of the coast with agricultural products. Trees were removed for firewood and charcoal-making. Today irrigated agriculture and second-home developments have cleared the land of forest and opened slopes to severe erosion. 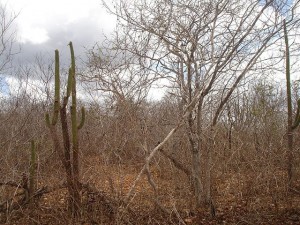 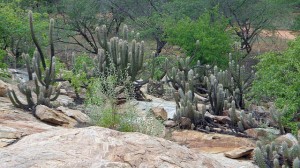