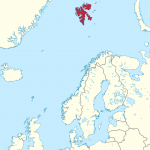 The Svalbard archipelago, stretching from roughly 74°N to 81°N, has low biodiversity as is typical of high latitude biotas. Due to the presence offshore of the relatively warm waters of the North Atlantic Current, the western coast of its largest island, Spitzbergen, usually remains ice-free all year; but the ground is underlain by permafrost which thaws to depths of 1-5 ft in summer. On the level surfaces of the strandflats (raised beaches and marine terraces) edging the island such periglacial landforms as rock stripes, patterned ground, and pingos may appear. Steep cliffs line the inland boundary of the strandflats and are favorite nesting places for seabirds such as guillemots, kittiwakes, puffins, and dovekies, the droppings of which enrich the substrate below them and permit a relatively dense growth of plants.  In early summer, ground-hugging herbaceous perennials flower in profusion. Many grow in mats or tufts. Most are no more than 4-5 inches tall. Sedges and grasses also bloom. More than 175 vascular plants have been recorded from the archipelago. Mosses, lichens, and fungi also occur. 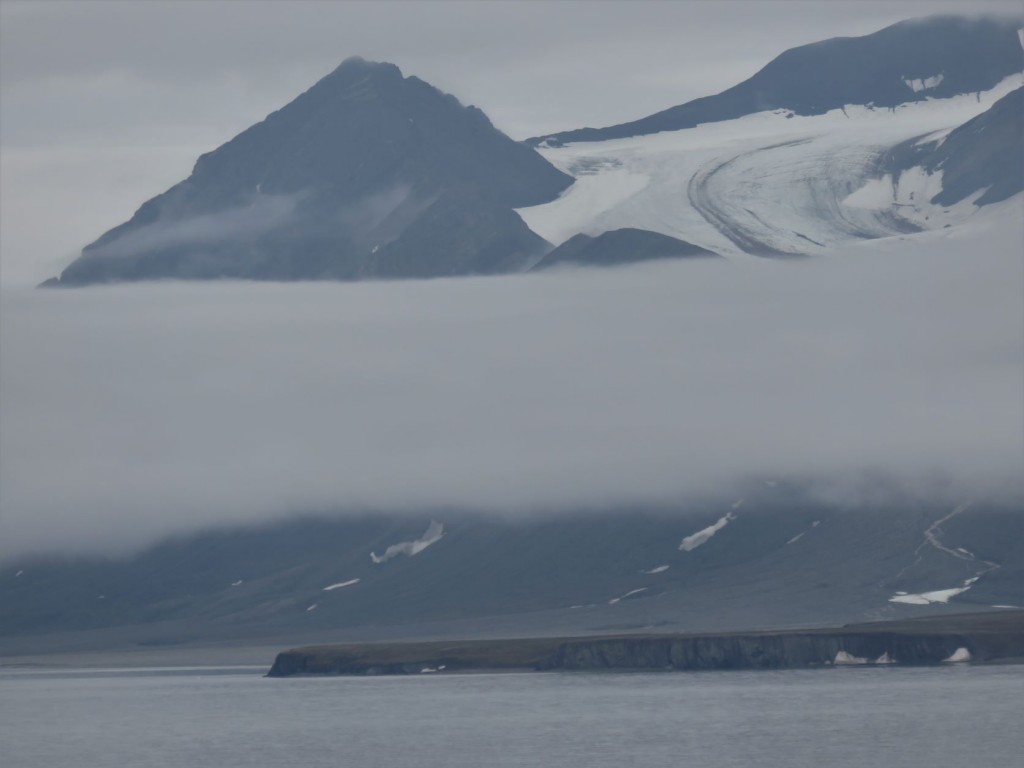 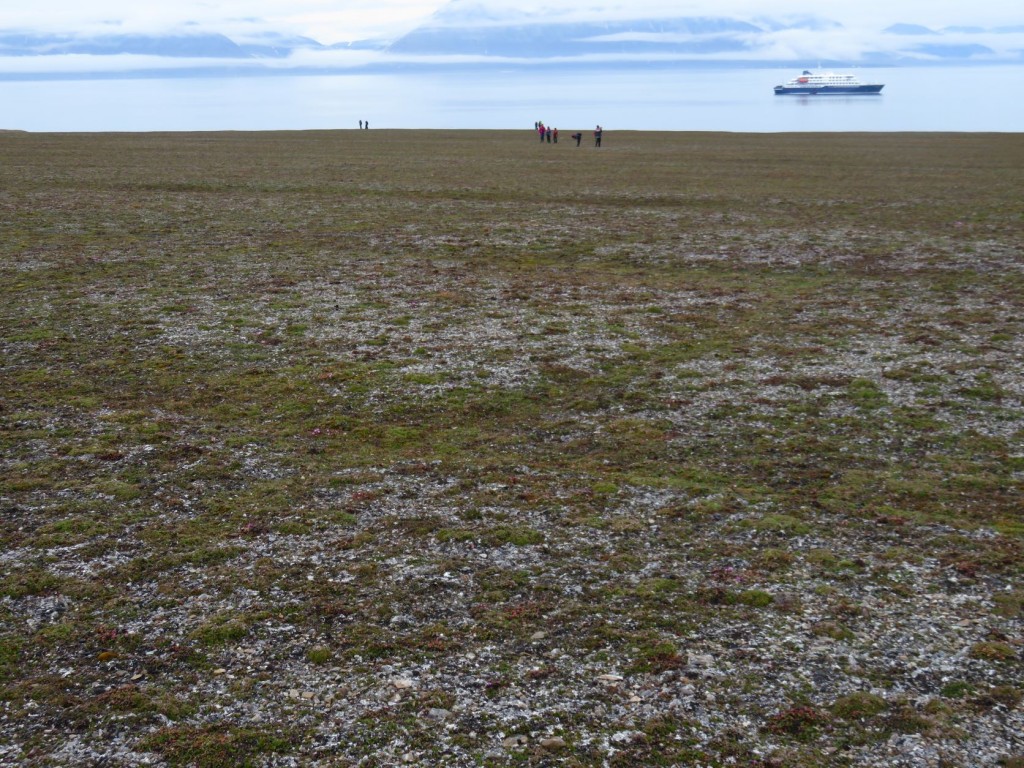 The level surface of the strandflat is underlain by permafrost and hosts many tundra plants. 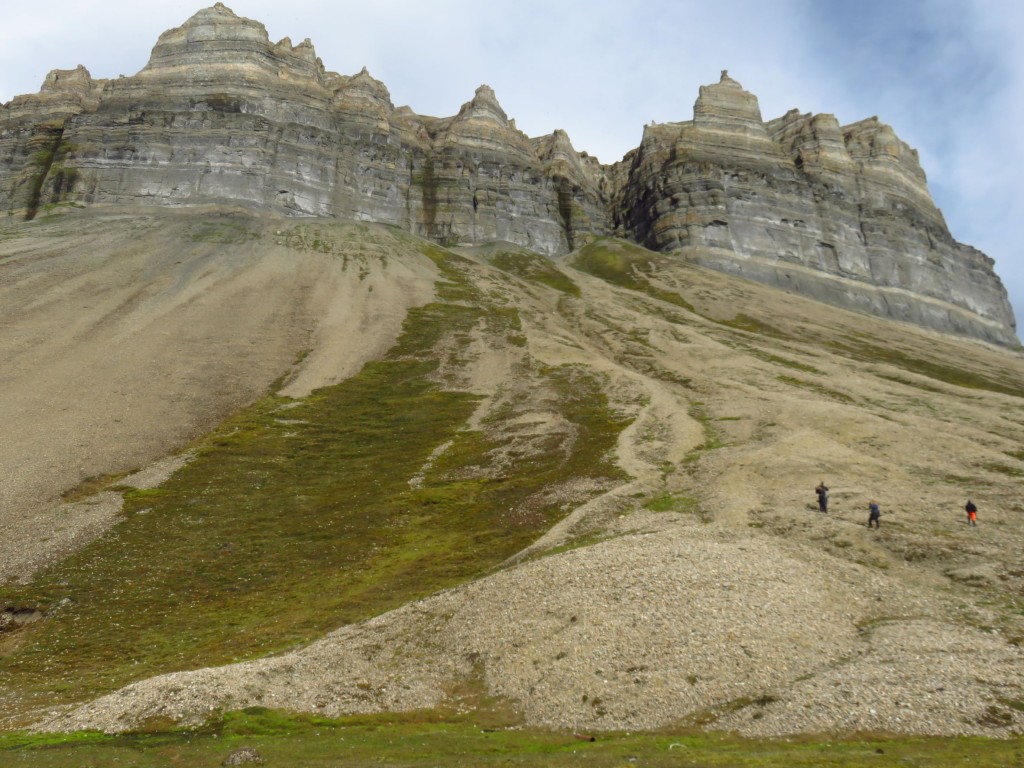 On their landward margins, strandflats end abruptly below cliffs housing nesting seabirds.
Stony hill in foreground may be a pingo.

The regenerative buds of most tundra species occur at or just above the ground surface. Herbaceous perennials have long roots or rhizomes that store carbohydrates during winter dormancy. Common growthforms are mats, cushions, and tussocks; rosettes are not uncommon. All are pollinated by flies and other insects or by the wind, but most have various means of vegetative reproduction. Many have hairy stems, leaves, or buds (i.e., sepals protecting the petals) that shield growing tissues from the sun and drying winds and help conserve heat, making early spring flowering possible.

Svalbard Poppy (Papaver dahlianum) is an early bloomer with dark hairs covering its flower buds that absorb the sun’s warmth. It is restricted to Svalbard, north-eastern Greenland, and northern Norway. 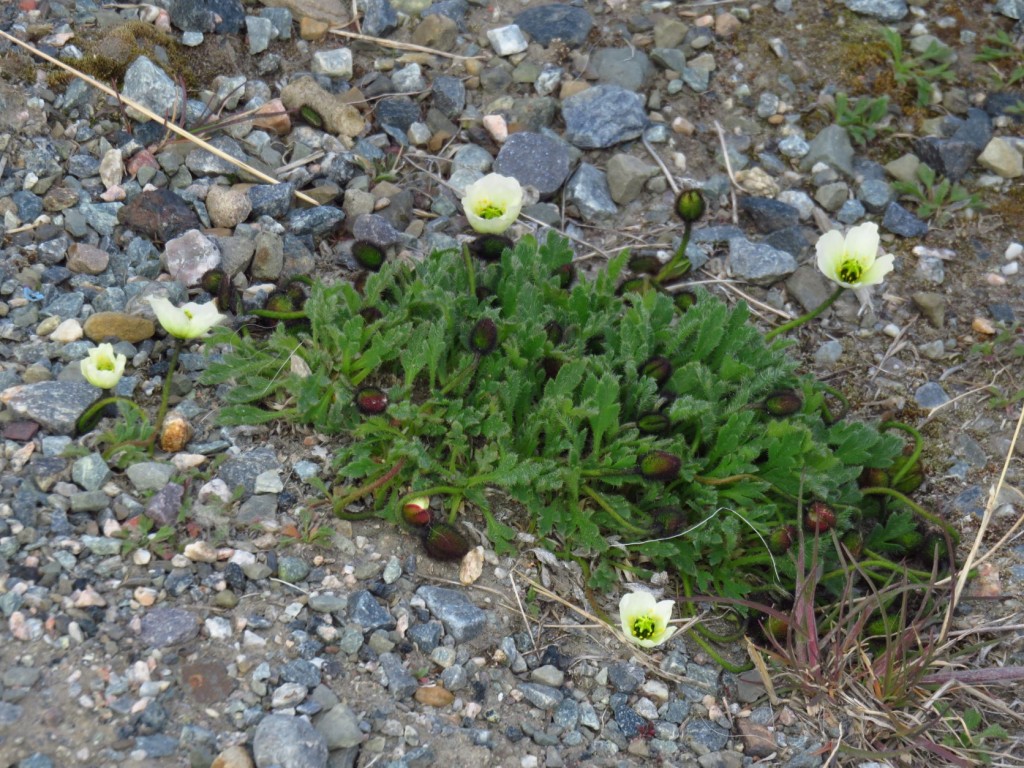 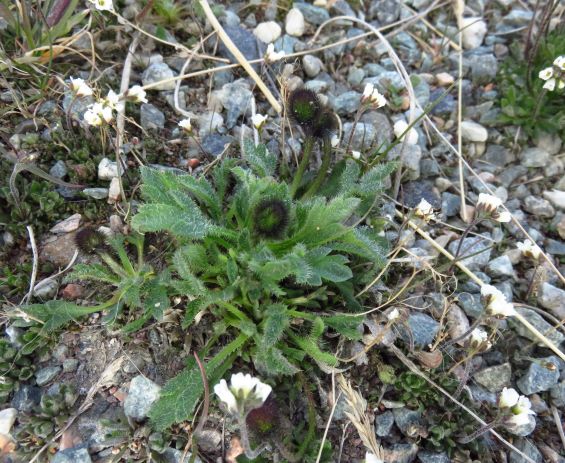 Saxifrages are a major component of the Svalbard flora. Purple Saxifrage (Saxifraga oppositifolia) is a mat-forming perennial and one of the first plants to bloom in summer on Svalbard. Mats consist of multiple plants formed vegetatively when creeping branches take root where they touch the ground. 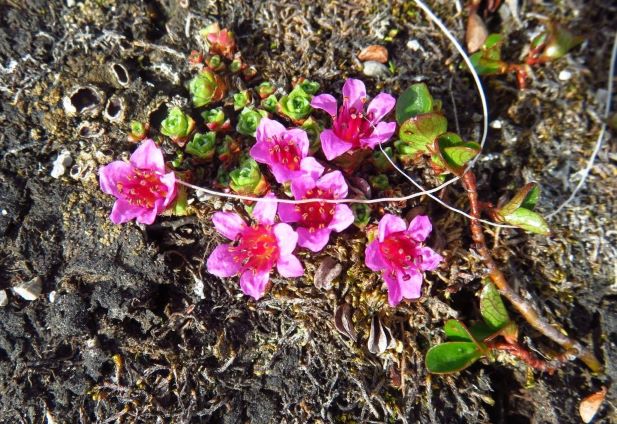 Other saxifrages include white-flowered Tufted Saxifrage (S. cespitosa), Alpine Saxifrage (Micranthes nivalis) with basal leaves growing as a rosette, and Polar Stoloniferous Saxifrage (S. platysepala) with its long, red above-ground runners (stolons) at the nodes of which new plants can develop. 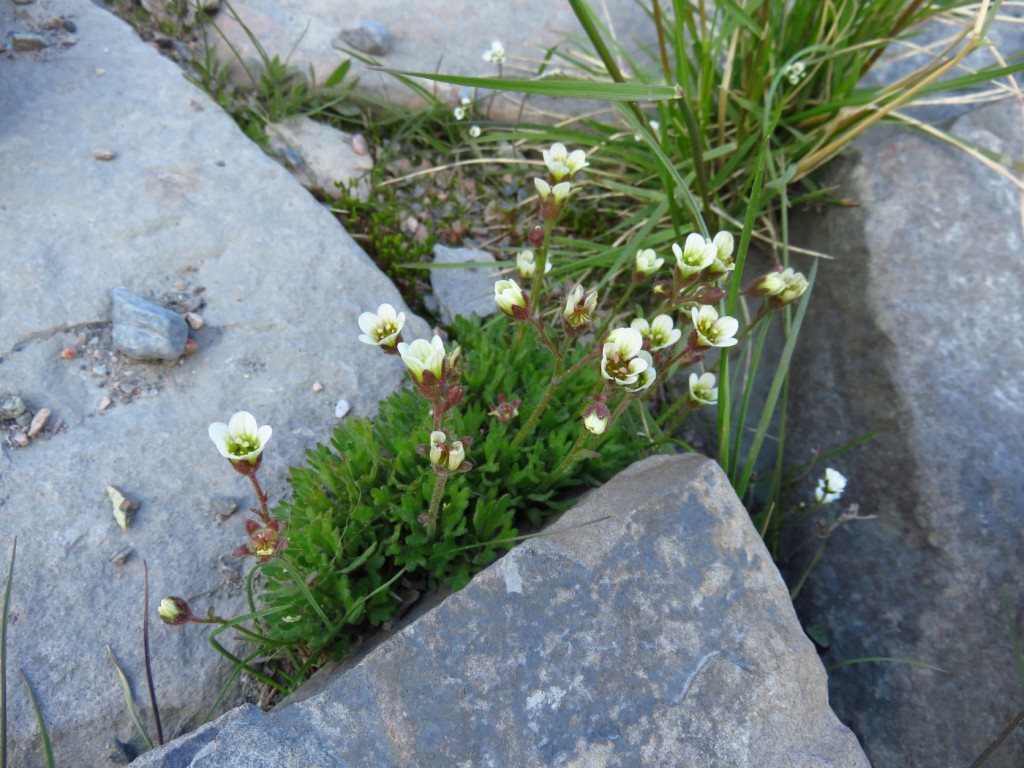 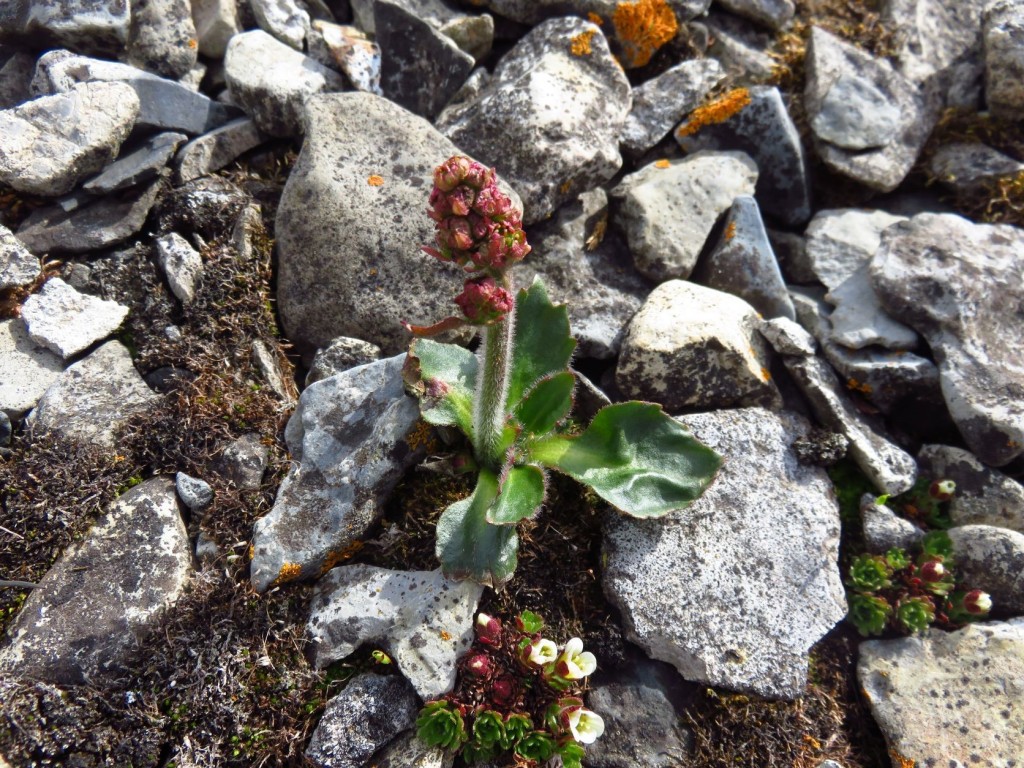 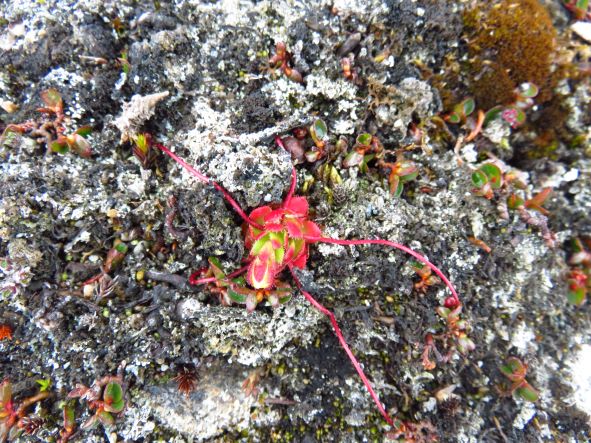 The Drooping Saxifrage (Saxifraga cernua) exhibits another form of vegetative growth. The red bulbils at the bases of leaves fall off and grow into new plants. 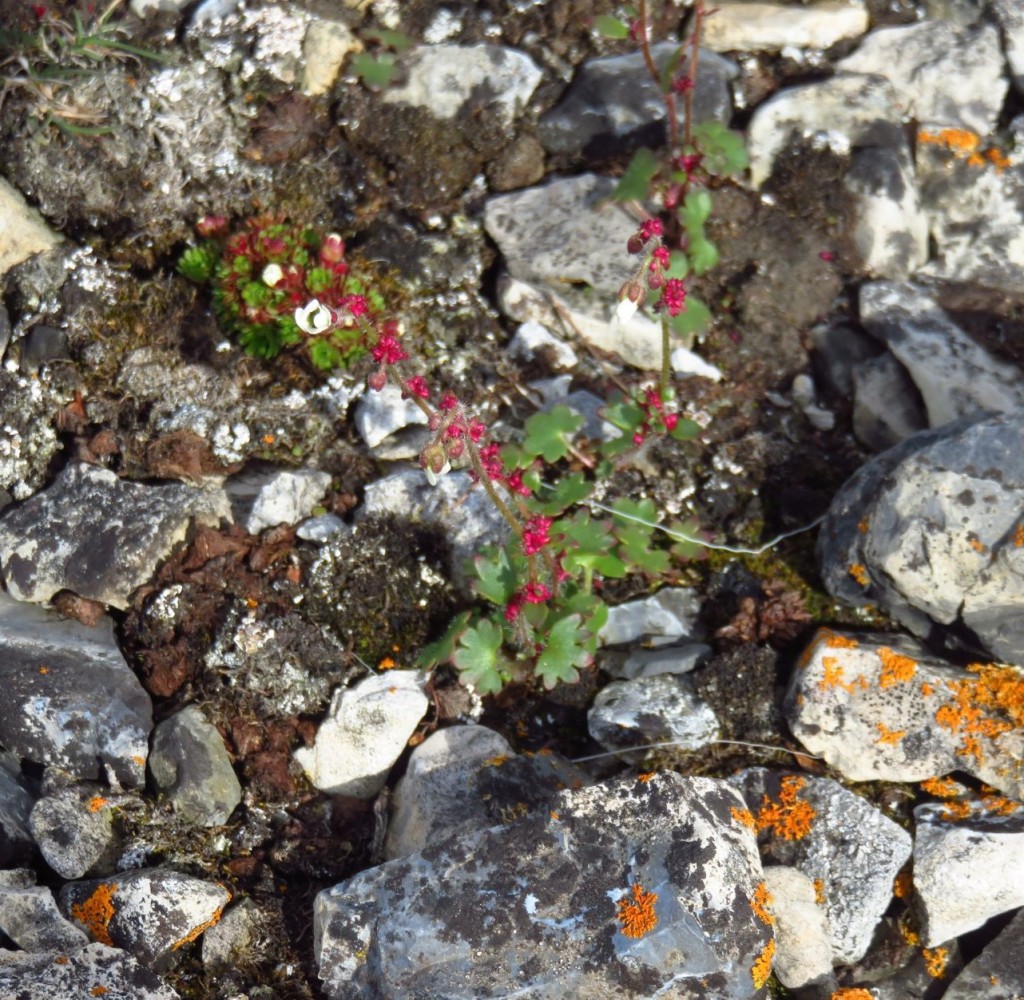 White Arctic Bell-heather (Cassiope tetragona) is another High Arctic species that forms mats on Svalbard and may bloom over large areas in early summer. 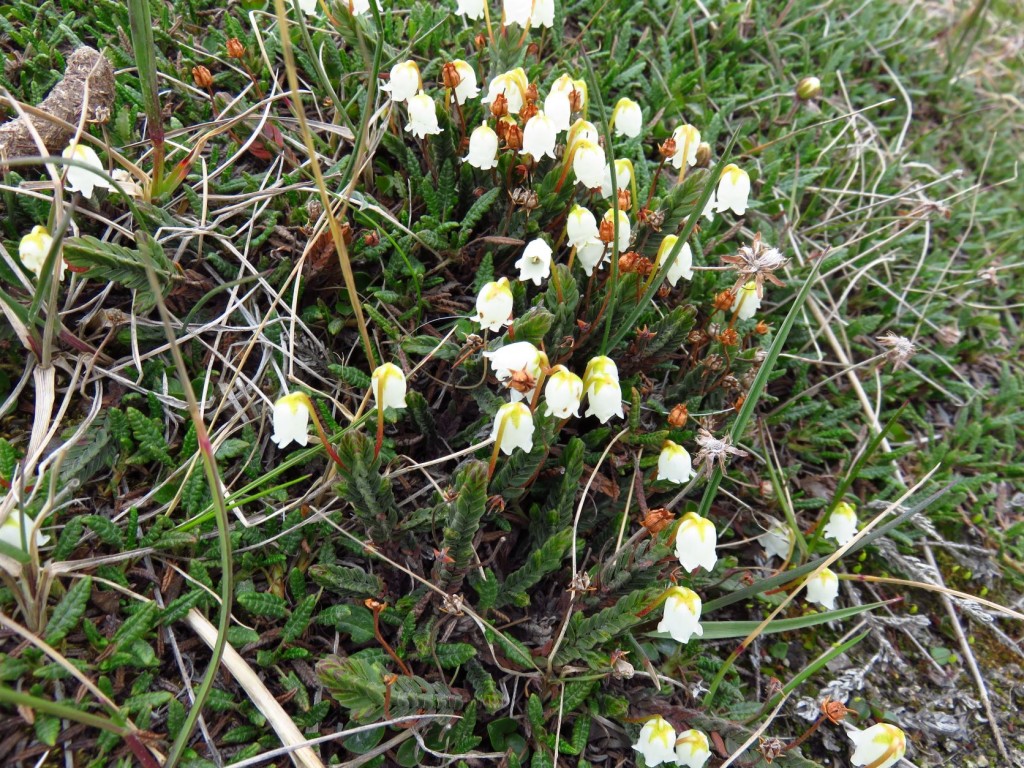 Mountain Avens (Dryas octopetala) may cover considerable areas. These long-lived, evergreen dwarf shrubs have woody stems. Older stems die as new growth extends outward, leaving sinuous strips of living plants. In Pleistocene sediments, the presence of Dryas leaves and pollen is an indicator of tundra habitat and is used to delineate the tundra/taiga border of paleo-environments. In Europe, the last two cooling periods of the Pleistocene are known as the Older Dryas (ca. 14,000 years ago) and the Younger Dryas (ca. 12,500-11,500 years ago). 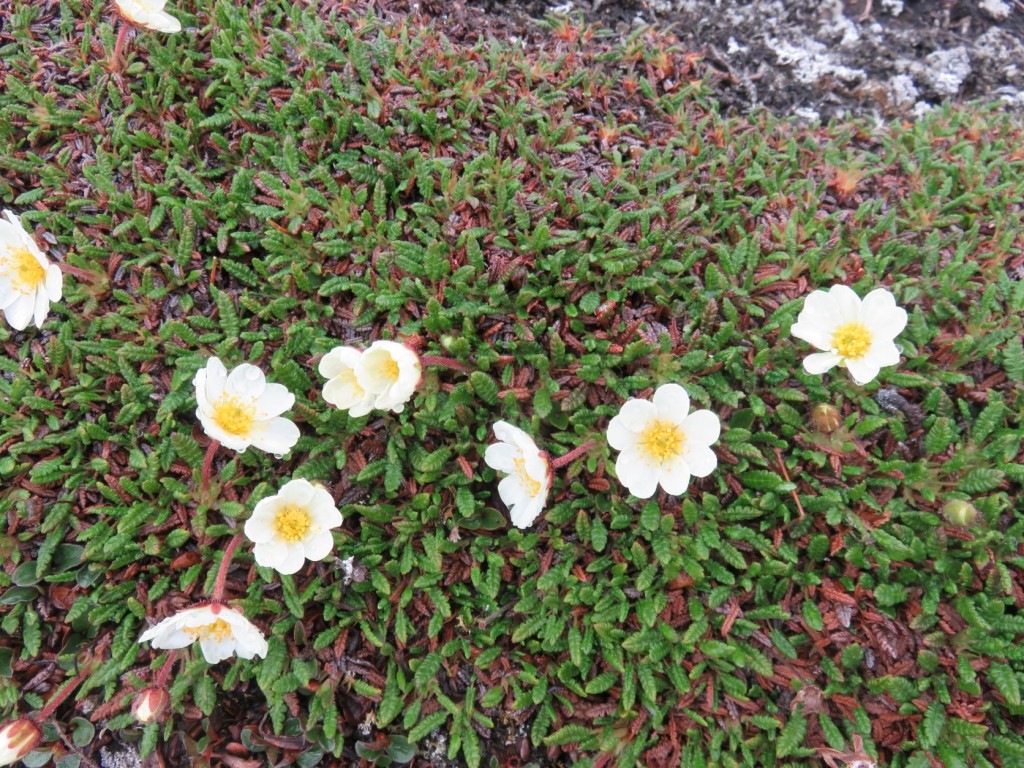 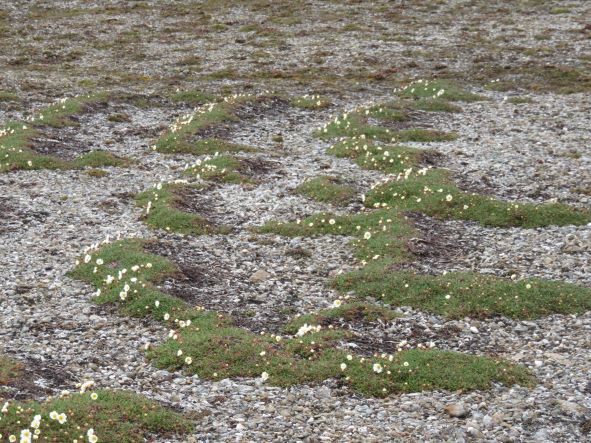 Mats of Mountain Avens may develop into sinuous strips as they spread and older branches die.

Moss Campion or Compass Plant (Silene acaulis) exemplifies the cushion growthform. This compact mass is a single individual with a long taproot. The first flowers appear on the south-facing side of the clump and then spread to the north as the season progresses. It can also be found in the alpine zone of North American mountains. 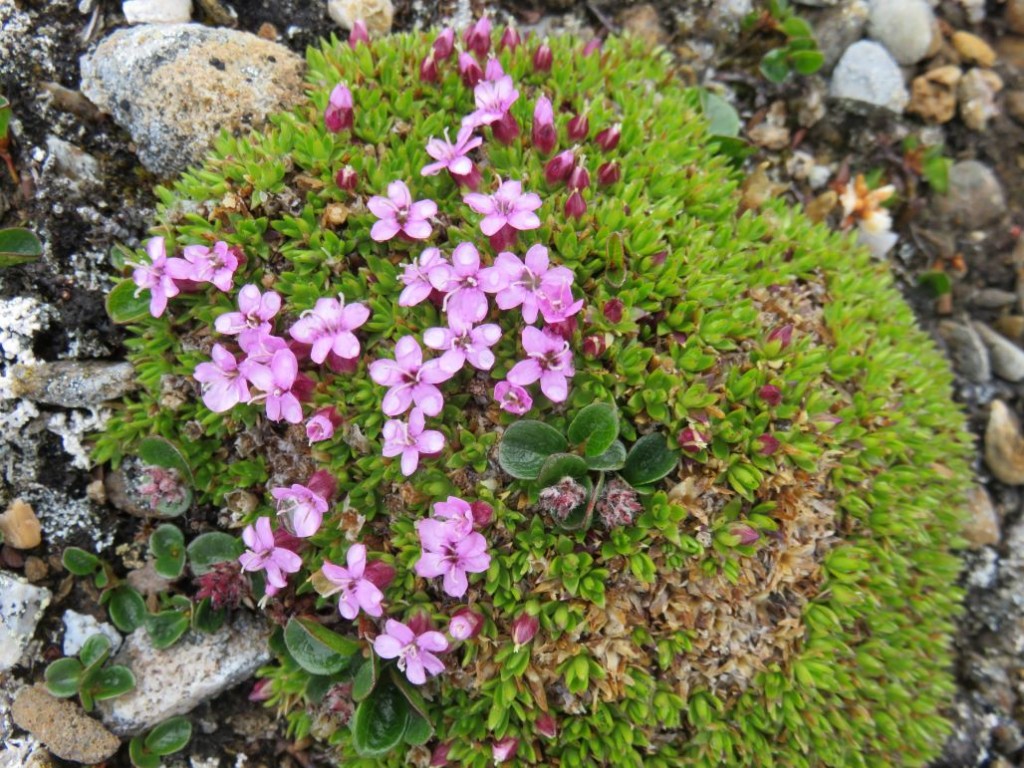 Polar Scurvygrass (Cochlearia groenlandica) has a high vitamin C content and was used by Native peoples, polar explorers, whalers, and miners to prevent scurvy. It grows most vigorously in nutrient-rich areas such as below bird cliffs and is consumed by gulls, geese, reindeer, arctic foxes, and even polar bears. 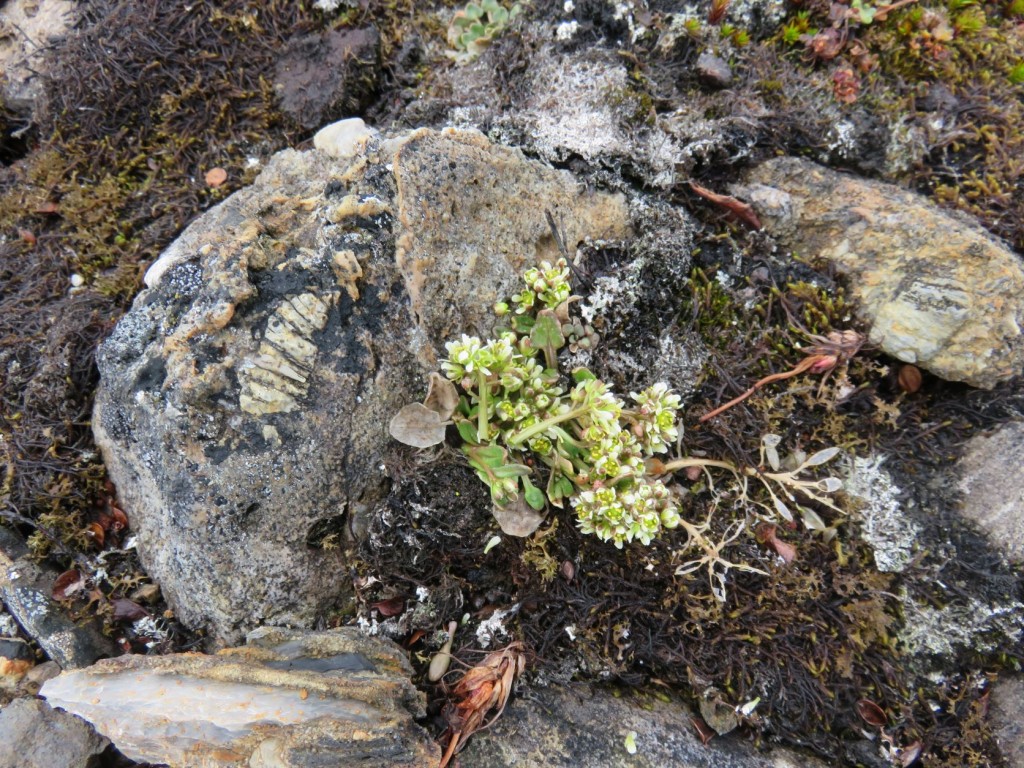 Loose tufts of hairy-stemmed Arctic Mouse-ear (Cerasatium arcticum), a chickweed, grow in damp sites and open gravel from Labrador and Baffin Island to Greenland, Iceland, and northern Norway and Svalbard. 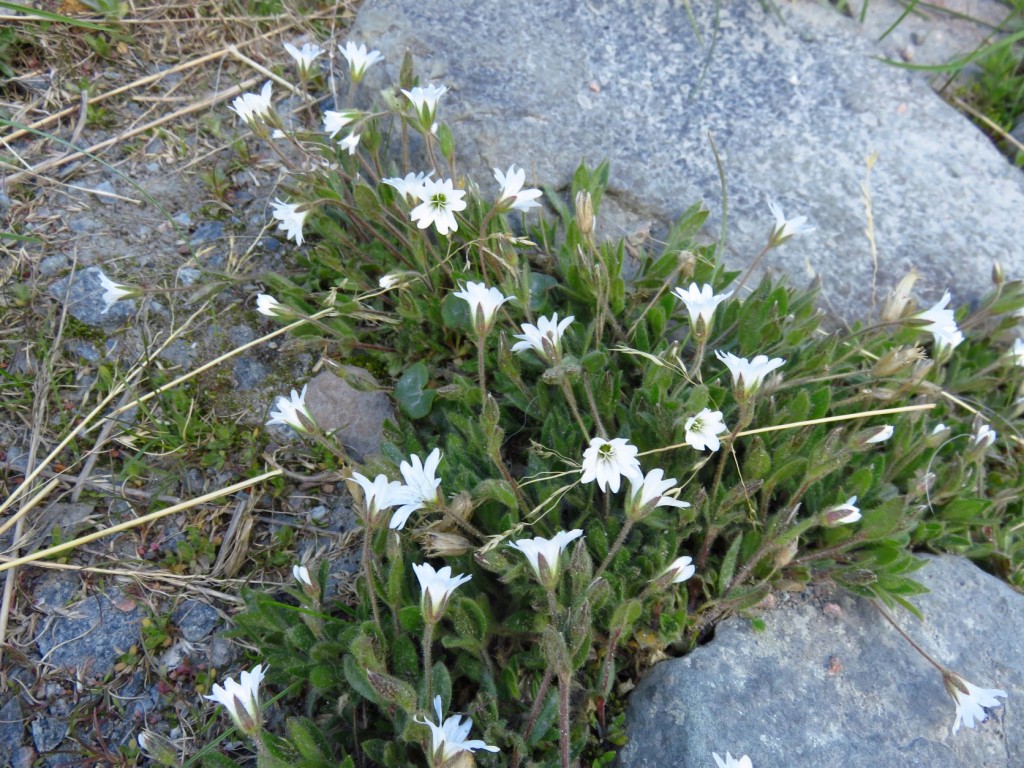 Pale Whitlow-grass (Draba oxycarpa) is an endangered plant known from eastern Greenland, northern Norway, and Svalbard. Not a grass at all but a member of the cabbage family, its erect stems bear flowers that vary from yellow to pale yellow. 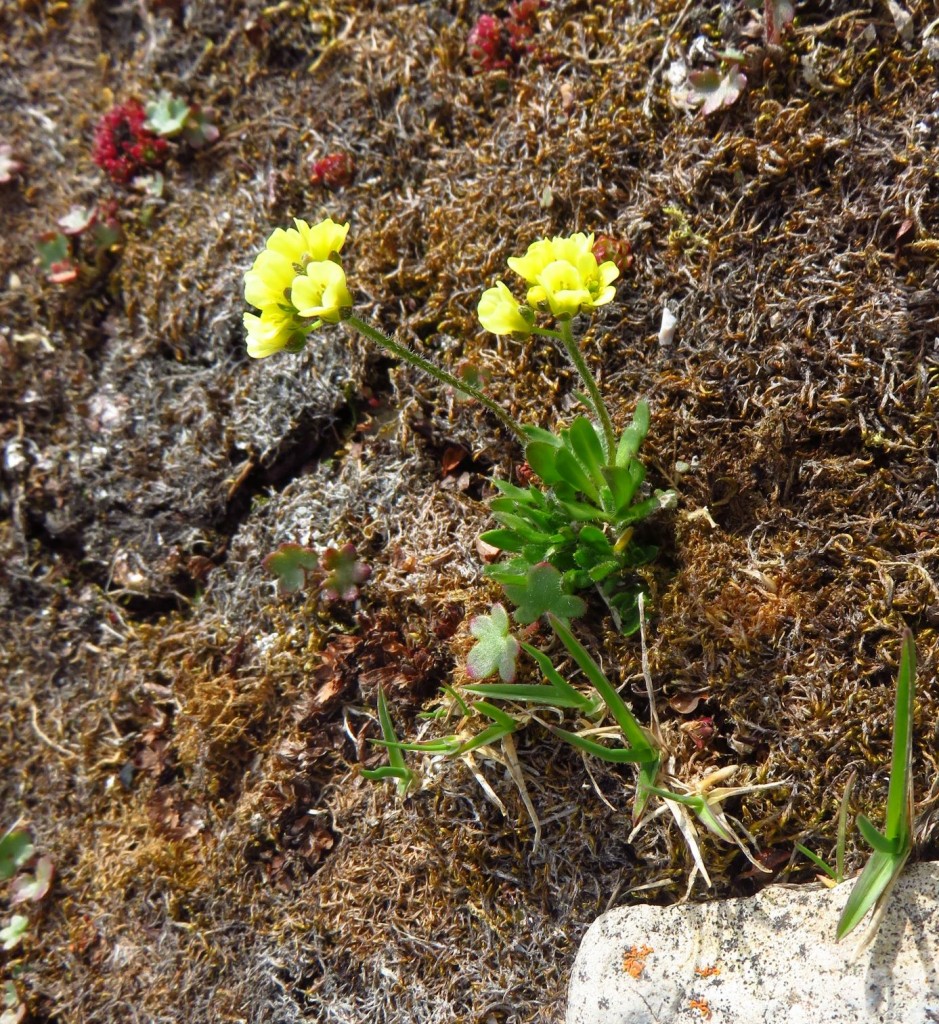 Polar Willow (Salix polaris) is a short, prostrate woody shrub that barely rises above the surface and may form mats. It produces red catkins in the summer. These dwarf shrubs are one of two “tree” species on the High Arctic Tundra, the other being Dwarf Birch (Betula nana subspp.). It is expected that the distribution of the birch in particular will expand as the climate warms. 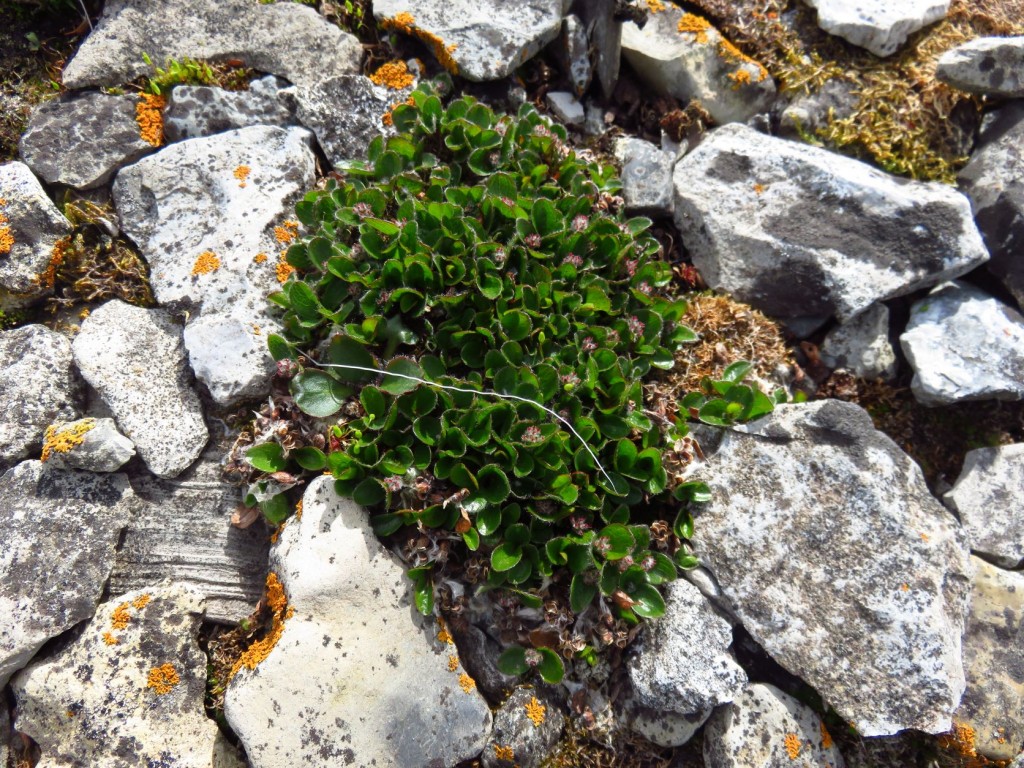 Although trees are absent from the tundra, driftwood originating in the boreal forests of North America and Siberia can be abundant along the shore, carried into the Arctic Ocean by the great northward-flowing rivers of those lands. 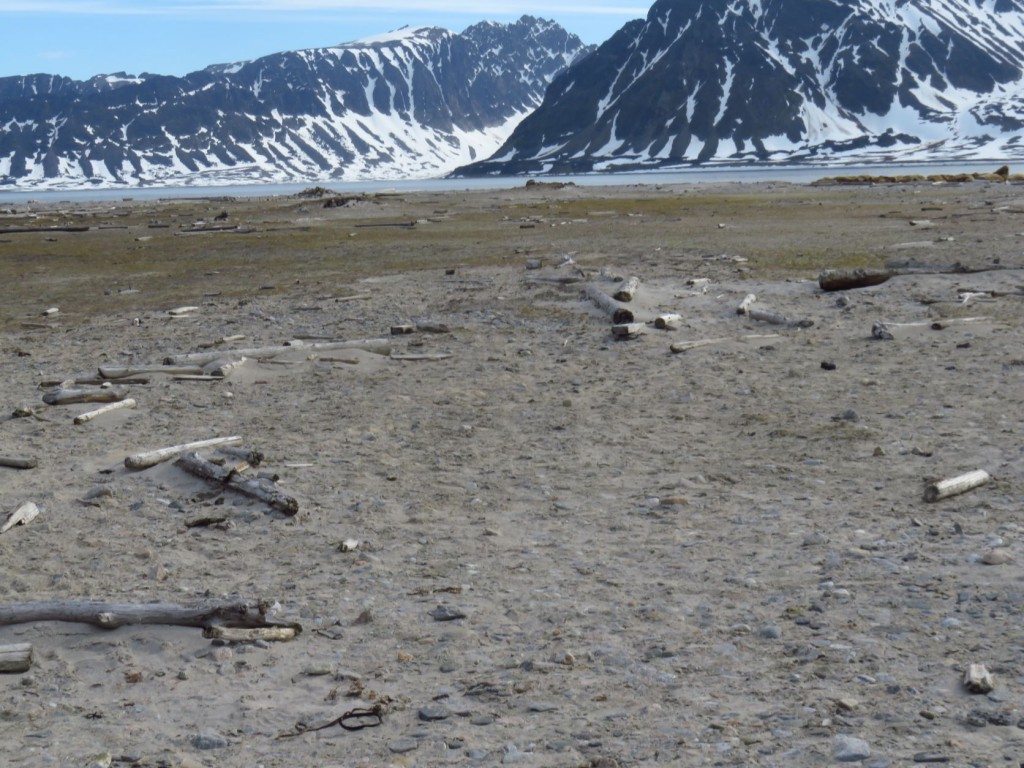 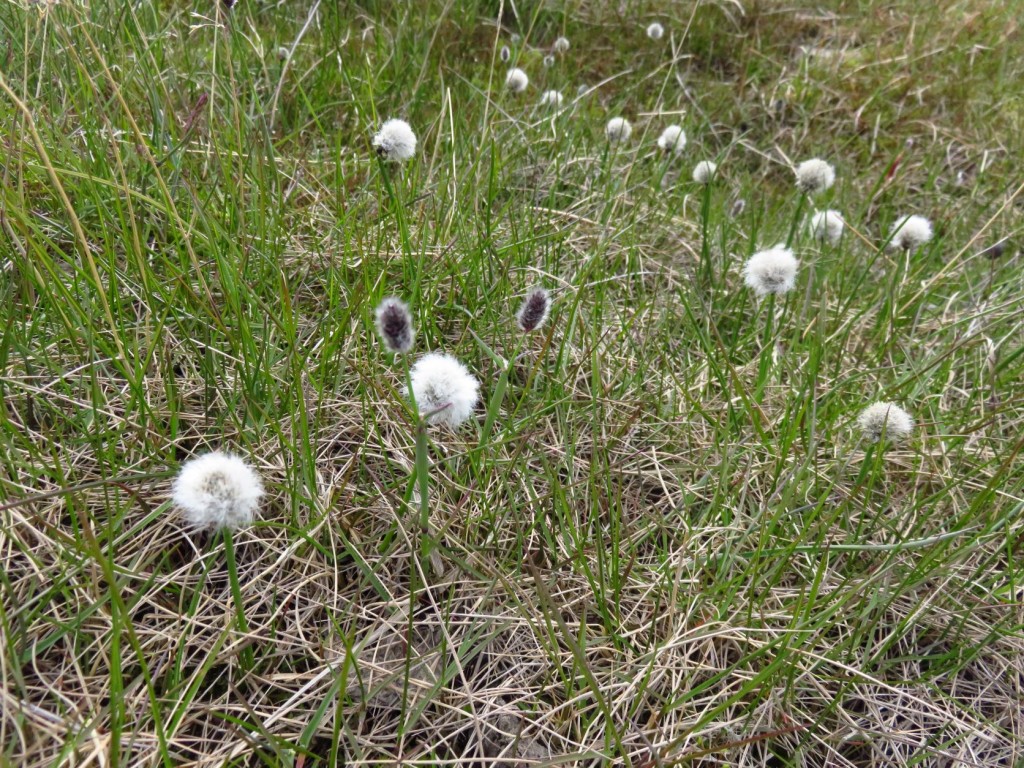 Like the flora, the High Arctic fauna displays low diversity. There are no lemmings or other rodents, for example, on Svalbard. The Svalbard reindeer (Rangifer tarandus) is endemic and is the smallest of the reindeer and caribou subspecies found around the Arctic. There is only one resident mammalian predator, the Arctic fox (Vulpes lagopus). It feasts on the eggs and young of Common Eider (Somateria mollissima), the very few species of geese and shorebirds that come to the Arctic to nest in summer, and even cliff-nesting sea birds. Avian predators such as Parasitic Jaeger (Stercorarius parasiticus) and Glaucous Gulls (Larus hyperboreus) also consume eggs and young of nesting birds. 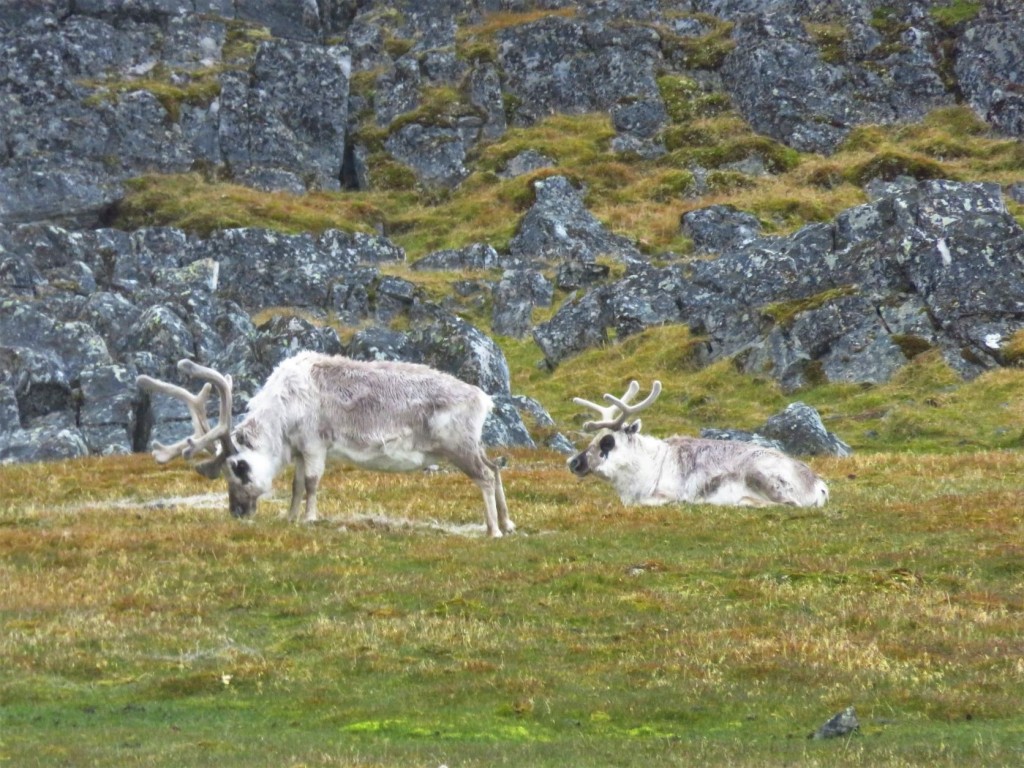 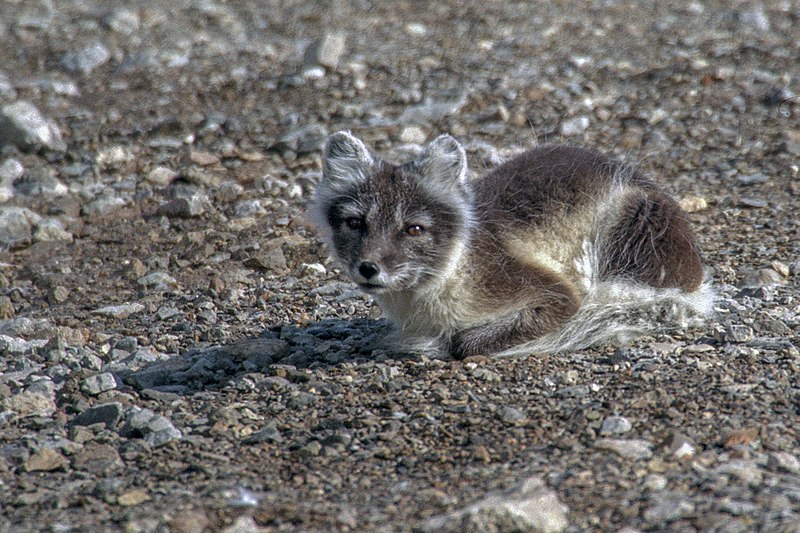 The Svalbard Rock Ptarmigan (Lagopus muta hyperborea) is the only land bird that is a year-round resident. A plant-eater, it also resides on Franz Josef Land. Only one songbird summers on Svalbard, the seemingly ubiquitous Snow Bunting (Plectrophenax nivalis). 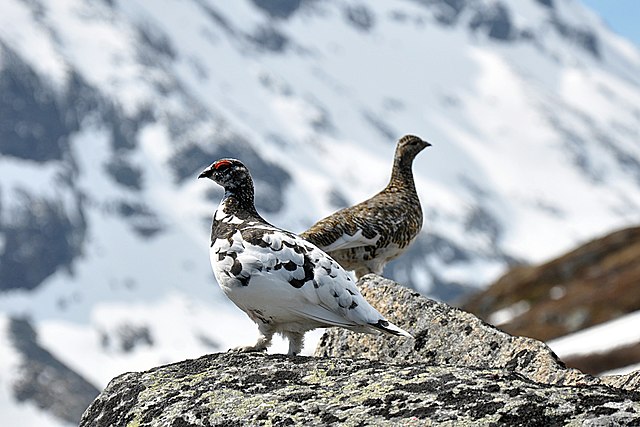 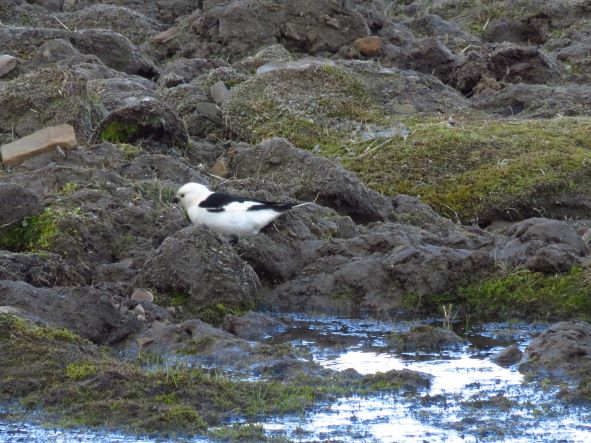 In summer, polar bears (Ursus maritimus) may scavenge and hunt on land, but they are more properly considered marine mammals and usually feed on seals. 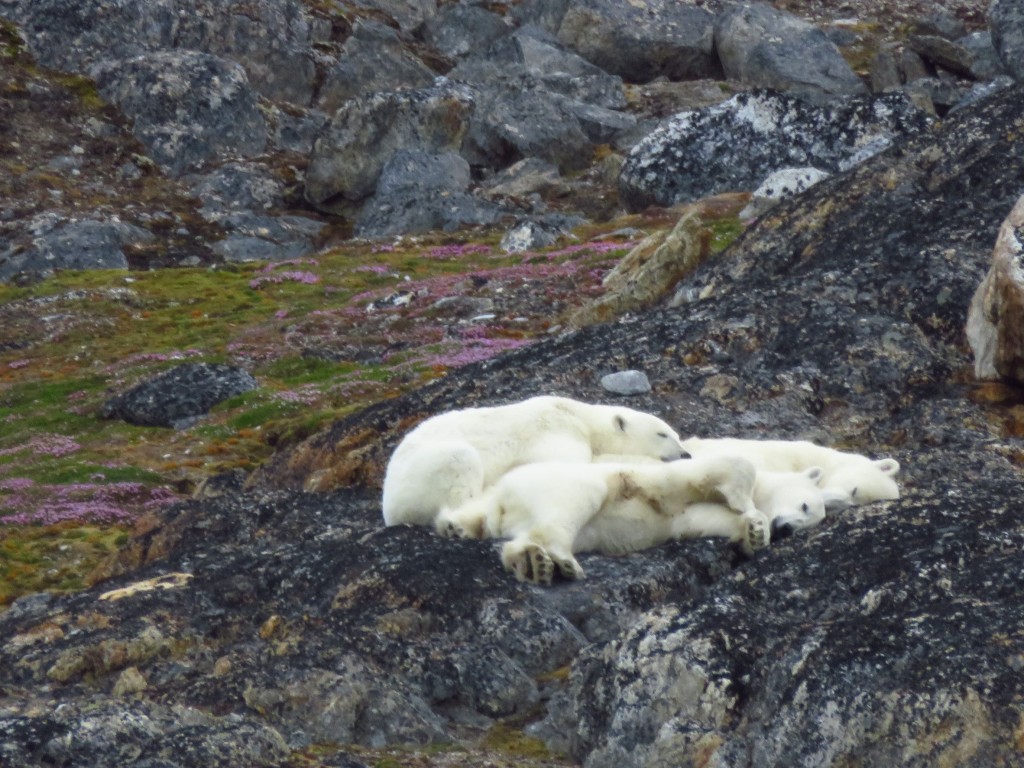 All photos by author unless otherwise credited. Taken late June 2022 while on Spitzbergen tour with Naturalist Journeys and Oceanwide Expeditions.