Scientists are beginning to recognize permanent ice on land and at sea as a distinct biome with a distinct assemblage of living organisms. Terrestrial ice occurs mainly as ice sheets and glaciers; oceanic ice as ice shelves and sea-ice. These are parts of Earth’s cryosphere, which also includes permafrost, summer snowfields, and winter ice formed on lakes and rivers. Characteristics of the life inhabiting permanent ice include the dominance of microorganisms and the existence of relative short food chains. Metabolically active lifeforms may be found on the surface of the ice, within the ice, and—on land—beneath the ice.

The climate associated with permanent ice in polar regions and in alpine situations is characterized by low temperatures generally at or below freezing throughout the year and low amounts of precipitation usually occurring as snow. In the Koeppen system, these are EF climates. Organisms are faced with the threat of desiccation as well as low nutrient availability. On the surface there may be intense ultraviolet radiation.

Permanent terrestrial ice covers 10 percent of the land surface of Earth, occurring primarily as ice sheets (or caps) and glaciers. The largest ice sheet covers most of Antarctica. In the Northern Hemisphere the Greenland Ice Sheet covers the greatest extent; smaller masses of ice cover Arctic islands such as Svalbard. Earth’s highest mountains (including the Rocky Mountain system of North America, the Andes of South America, the Alps of Europe, and the Himalayas of Asia) still contain large alpine glaciers and snowfields.

Ice sheets form domes in the accumulation zone where snow builds up, and the ice slowly flows outward as ice streams and glaciers. In the mountains the upper elevations are home to the accumulation zone and ice flows downslope, carving deep U-shaped valleys. Between moving ice and bedrock may be a lubricating layer of liquid water.

Terrestrial ice is lost in the ablation zone via calving, sublimation, and/or evaporation.

Three habitats can be recognized within the terrestrial aspect of the ice biome: the surface, the subsurface (interior of the ice mass), and beneath the ice (subglacial). The surface is exposed to sunlight and is inhabited by cold-adapted photosynthetic microbes, in particular cyanobacteria. The same cyanobacteria species found in Antarctica also occur in the Arctic. Dispersed in by the winds, the traits that allow them to survive extreme conditions in polar regions enables them to withstand high ultraviolet radiation, extreme cold, and extreme dessication in the atmosphere. 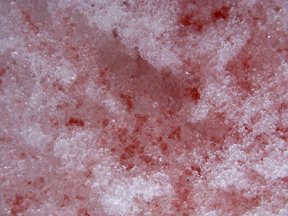 Surface snow can be home to phytoflagellates such as Chlamydomonas nivalis which contain red pigments that hide the presence chlorophyll and give rise to red snow or watermelon snow. During the brief melting seasons in polar and high alpine environments, liquid water is available and photosynthesis and respiration takes place.

Bacteria also occur; members of seven phyla have been identified in small, water-filled surface pits that contain a dark mixture of organic and inorganic particles known as cryoconite. The dark-colored material absorbs sunlight and becomes warm enough to melt the ice and deepen these cryoconite holes.

Tiny multi-celled organisms (Metazoan microbes) that prey on the bacteria and cyanobacteria are relatively few and include rotifers, tardigrades, and nematodes. On some coastal glaciers in the Pacific Northwest (Washington state to southern Alaska) ice worms, Mesenchytraeus solifugus, can be found. These small (< 1 inch) annelid worms practice a vertical migration each day, rising to the surface in the evening and burrowing into the ice during the day. They may be fed upon by Snow Buntings.

Vertebrates are generally only visitors to the ice, foraging on the surface for windblown insects or hunting the 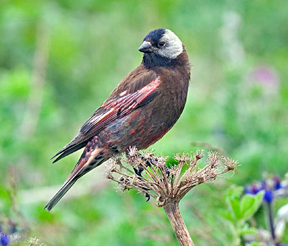 foragers or perhaps seeking relief from flying insects. Wolverines are known to cache kills in snowfields. In western North America the Grey-crowned Rosy Finch nests at the edge of glaciers but goes onto the ice itself to capture insects. In the high Andes of South America, the White-winged Duica Finch (actually a tanager) is the only land bird known to nest on glaciers.

Birds and mammals contribute nutrients to ice-dwelling microbes as their feces, fur, feathers, and corpses decompose.

Bacteria are known to live within the ice beyond the reach of sunlight.

The thin layer of water in subglacial habitats is home to non-photosynthesizing, single-celled organisms that obtain energy through the oxidation of inorganic minerals such as sulfides or iron. Hetertrophs such as fungi that obtain energy from organic material also occur in this environment.

Oceanic ice takes the form of ice shelves attached to and fringing land masses and free floating sea-ice. Approximately 44 percent of Antarctica’s coastline contains ice shelves, the landward edges of which are anchored to the seafloor and shore. They represent the floating edges of glaciers and arise and fall with the tide. Ice shelves vary in thickness from 330–3,300 ft (100–1,000 m). They melt and evaporate at the surface; new ice forms on the underside. The largest, the Ross Ice Sheet, is about the size of Spain.

Sea ice is any mass of frozen seawater. Pack ice is a floating mass of sea-ice formed over several years and comprised of many pieces. In the Southern Ocean, the ice pack covers about 1 million square miles at the end of austral summer in March and extends over 7 million square miles by the end of austral winter in September. Often the pack ice appears brown due to the abundance of tiny organisms living in it: bacteria, diatoms, flagellates, foraminiferans, and copepods. (These same organisms occur in Arctic Ocean ice, where they are joined by rotifers and nematodes.)  Turbellarians are common between ice crystals and in brine channels in the ice. Photosynthesis by the diatoms is possible in the top 6 feet (2 m) of the ice.

Open sea (pelagic) animals such as amphipods, copepods, krill, and Antarctic icefish (Notothenoidae) feed on these microorganisms along the edges and undersides of the pack ice. The Emperor Penguin nests during winter on the landward margins of the sea-ice, the only penguin that actually nests on ice. 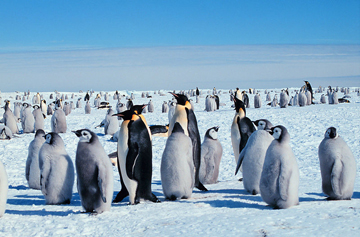 In the Arctic Ocean pack ice provides important hunting platforms for polar bears and walruses. As a warming climate diminishes the area of summer sea-ice, these large marine animals are threatened species.

NOTE: Sherali Niyazova has translated this page into Uzbek (http://eduworksdb.com/ice/) and Alana Kerimova has translated it into Kazakh at http://theworkscited.com/мұз/. It is available in Polish at https://odealo.com/page/lodowy-biom courtesy of Grzegorz Adamski. Amir Abbasov has translated it into Azerbaijanian at https://prodocs24.com/articles/buz/. Milica Novak offers a Croatian translation at http://pro4education.com/led/. Ana Mirilashvili has a Georgian translation at http://lpacode.com/ice/. Martin Aus has it in Estonian at http://techglobaleducation.com/jaa/.