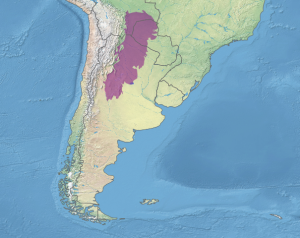 The Gran Chaco in the broadest sense is a vast ecoregion of approximately 250,000 mi2 encompassing one of South America’s largest seasonally  dry tropical forests. It lies within the rainshadow of the Central Andes in northern Argentina, western Paraguay, southern Bolivia, and far southwestern Brazil. It extends from roughly 17°S to 33°S.The name derives from the indigenous Guaraní language and refers to a productive hunting area.

Two major regions are generally recognized, the Humid Chaco in the east and Dry Chaco in the west. A  Sierra Chaco is also identified by some writers in the southernmost part of the Argentine Chaco bordering the Monte. A number of plant communities occur, but in a strict biogeographical sense, the Chaco denotes seasonally dry woodlands and scrubby forests growing on an alluvial plain lying at elevations below 1000 ft asl and stretching from the foothills of the Andes east to the Paraguay River.

The climate is subtropical with frequent frosts during the winter months. The Dry Chaco receives about 20 inches of precipitation annually in summer (November through March), when moist air from the Atlantic Ocean moves across the Amazon basin and is deflected southward by low altitude jet streams. The Humid Chaco may receive as much as 47 inches of rain distributed rather evenly through the year. While the west suffers seasonal droughts, the east suffers frequent flooding. 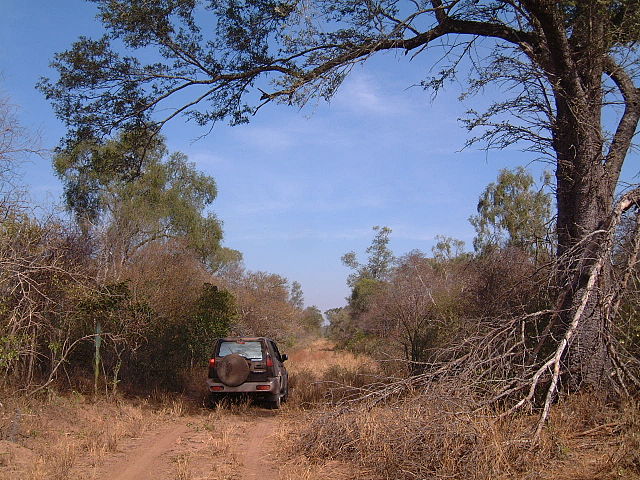 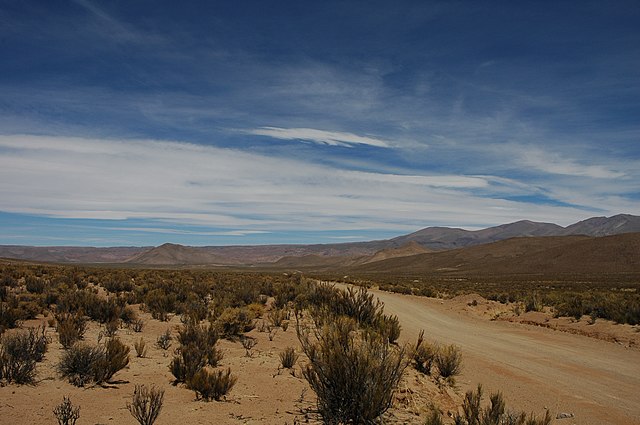 The Chaco has a high diversity of woody trees and tall shrubs. The characteristic vegetation is a mix of dense thorn forest and open woodland dominated by quebrachos (Shinopsis spp.), mesquite (Prosopis spp.), palosantal (Bulnesia spp.), and cardonal or toothpick cactus (Stetsonia coryne.). The Humid Chaco is dominated by red quebracho (Shinopsis balansae), while the Dry Chaco is dominated by white (Aspidosperma quebrancho-blanco). The widespread thorn forest, in an undisturbed condition, is nearly impenetrable since it has both a shrub layer and a ground layer of bayonet bromeliads (Bromelia serra) and firecracker cactus (Cleistocactus baumanni).  Both red and white quebracho are prized for their very dense timber and as a source of tannins for leather-making; deforestation is widespread and now accelerating with conversion of forests to commercial agricultural lands, in particular for biofuels such as switchgrass, jatropha, and sweet sorghum. 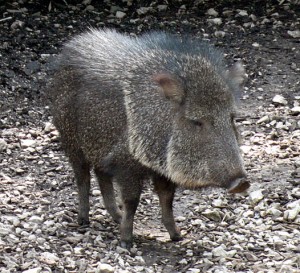 Faunal diversity is also high. Among some 409 bird species are migrants from both northern and southern South as well as North America. Of note are South American endemics such as Black-legged Seriema, Blue-crowned Parrakeet, Picui Ground Dove, Guira Cuckoo, Little Thornbird, and Many-colored Chaco Finch. Mammal species number about 150 and include such threatened species as Chacoan peccary or tagua (Catagonus wagneri), maned wolf (Chrysocyon brachyurus), and red brocket deer (Mazama americana). The Chacoan peccary was long thought to be extinct, but was rediscovered in 1975.

Two other peccaries (white-lipped and collared) can still be found in the Chaco, as can other large-sized mammals such as guanaco (Lama guanicoe), Pampas deer (Ozotocerus bezoarticus), and tapir (Tapirus terrestris). Medium-sized mammals include the Patagonian hare or mara (Dolichotis patagonum), plains vizcacha (Lagostomus maximus), and the Chacaoan cavy (Pediolagus salinicola). At least 10 species of armadillo inhabit the Choco, among them the endemic pink fairy armadillo (Chlamyphrous truncatus). The giant armadillo (Priodontes maximus) lives in Dry Chaco.

Habitat loss and hunting continue to decimate the populations of most mammals, and many species are now threatened. Their loss would impact the vegetation as a large proportion of the woody plants of the Chaco depend on animals for the dispersal of their fruits and seeds.

Note: This page is available in German courtesy of Laura Fields at https://edufy.club/gran-chaco/.