In the open sea beyond the continental shelf, five life zones can be recognized. In the euphotic or epipelagic zone (the first 500 feet below the sea surface) cyanobacteria and phytoplankters receive enough light for photosynthesis. These tiny organisms are the primary producers of the entire pelagic regions. Beneath this zone, consumers either feed on sinking algae and bacteria, are scavengers of the rain of organic debris coming from above, or are predators of the other consumers. All life in the pelagic region either drifts or must swim in the water column all of the time.

At depths greater than 3,500 ft below sea level, the pelagic habitat is fairly uniform and dark. Pressure increases with increasing depth, which poses problems for body structure and buoyancy, but an even bigger challenge is limited food availability. Species have evolved to meet these challenges, but biodiversity is relatively low. 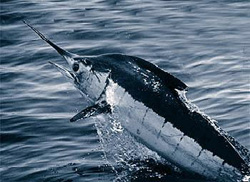 In the epipelagic zone, tiny zooplankters consume the one-celled phytoplankters larger, and zooplankters rely upon globs of particulate organic matter (POM) known as “marine snow.” At night the zooplankters rise toward the surface to feed on algae and bacteria. Most predators, both invertebrate (e.g., copepods) and vertebrate (e.g. fishes) also feed at night. Many of the carnivores hunt by sight, so natural selection has favored “invisible” zooplankters—transparent gelatinous creatures such as salps (planktonic tunicates), siphonophores, medusae (jellyfish), ctenophores (com jellies), squids, and chaetognaths (arrow worms). Fish typically are counter-shaded (dark on top; light on the undersides) and have disruptive patterns that make them less visible to predators from below; still they are safer feeding in night-time darkness when their prey is more concentrated.

In the mesopelagic zone, the same groups dominate as in the epipelagic zone, but different species occur: copepods and siphonophores are especially abundant. Shrimp in this region of the sea are often transparent and red or orange, pigments that absorb the shorter wavelengths of sunlight that penetrate into this zone, rendering them more or less invisible to predators. 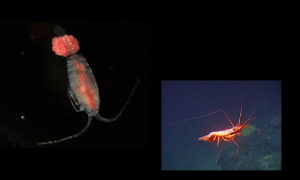 Fish in the upper parts of this zone are strongly muscled, usually have well-developed eyes, dark backs, reflective flanks, and light-producing organs (photophores) on their bellies. Gas-filled swim bladders help them control buoyancy. Predators tend to have upward-oriented eyes and mouths. Fishes in the lower parts of the zone are dark all over and do not have reflective flanks.

The highest diversity of pelagic organisms is found in the baythypelagic zone at depths between -3,000 and -8,000 ft. Fishes here are black and have tiny, simple eyes. They have fat-filled swim bladders or lake them altogether. Feather-like bristles and antennae may aid buoyancy. Bioluminescence is important in species and gender recognition, in luring prey, in spotlighting prey, and/or in confusing predators. Musculature is greatly reduced to save energy. Many fish look like a large mouth with fins. 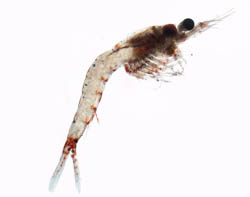 The abyssopelagic zone, an area of immense pressure and constant cold (35°-37° F) is inhabited primarily by decapods and, in the deepest waters, by mysid shrimp.

The hadopelagic zone (or hadal zone) occurs in oceanic trenches. Many species found in the zone are colorless, but may have some form of bioluminence. Jellyfish and viperfish are among inhabitants of the water; other organisms such as sea cucumbers and tubeworms may live on the seafloor. 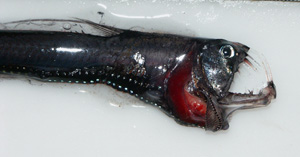 Within 300 feet of the seafloor at various depths a transition between the benthic and pelagic zones occurs. Food is more available than in many of the overlying waters. Benthic organisms float up into the zone and the larvae of both pelagic and benthic organisms may congregate here. Gastropods, amphipods,and sea cucumbers are other members of a diverse community that attracts deep sea predators.