A lake can be defined as any water-filled depression not connected to an ocean. Smaller, shallower bodies of water are often called ponds, but there is no size rule that distinguishes lake from pond. Usually it is a matter of local names.

About 0.009% of Earth’s water is held in lakes. These water bodies vary greatly in surface area, depth, and how they were formed. Many, such as Minnesota’s 10,000 lakes, are products of gouging or disruption of surface drainage due to Pleistocene glaciation. Others form as abandoned meanders (oxbows) of rivers or from surface drainage into closed basins. Lakes tend to be temporary features, geologically speaking, of the landscape; most are only 10-20,000 years old. The relatively few ancient lakes are of tectonic origin and occupy rift valleys. Lake Baikal, in Asia, is the oldest at 50-75 million years old. Lake Tanganyika on the African continent is 1.5-6.0 million years old.

Accumulation of sediments and ecological succession combine to ultimately change lakes into wetlands and wetlands into the terrestrial habitats of the regional biome.

Age and water chemistry, the latter determined by local geology and climate, determine the number and types of lifeforms in a given lake. Only ancient lakes tend to harbor many endemic species.

Since lakes are catchments for runoff from surrounding lands and for streamflow, they are sensitive to local and regional land use practices and vulnerable to pollution.

Since temperate zone lakes have been the subject of most scientific study, they serve as the model of a typical lake and lakes in the tropics or at high latitudes and elevations are often compared to them.

Typically, a lake is a water body deep enough to become stratified in summer; that is, to exhibit distinct layers based upon temperature. The upper layer (the epilimnion) warms in summer and is mixed by the wind, which helps keep nutrients and plankton near the lake surface. This is also the zone penetrated by most solar energy and therefore the zone where photosynthesis can take place. As such, it also referred to as the euphotic zone. The bottom layer, the hypolimnion, holds cooler, denser water.

Between the two layers is a narrow transition zone through which temperature changes rapidly with depth. This is the thermocline.

In the still waters of a lake, nutrients and micro-organisms tend to sink below the euphotic zone and must be recycled toward the surface in order to be consumed or, in the case of phytoplanters, to be able to photosynthesize. Surface mixing by wind accomplishes this in the epilimnion; upwelling from below revitalizes the upper layer with nutrients that sank to the lake bottom.

Lakes turnover due to seasonal temperature changes. Freshwater is most dense at 39°F (3.94°C). Further cooling to freezing at 32°F (0°C) results in a lowering of density, so very cold water rises to the surface causing what is known as a turnover of lake water. The winter temperature profile is such that the coldest water and ice are at the surface. Water in the epilimnion will be approximately 34°F (1°C), while water in the hypolimnion stays around 39°F (4°C).

Hence lakes freeze from the top down. When ice completely covers the pond, it acts as insulation and prevents all but the shallowest of ponds from freeing solid. This allows organisms to survive winter in or near the lake bottom.

Tropical lakes experience only infrequent turnover, and dead zones may develop near the lake bottom as oxygen is depleted through decay processes. During anaerobic decomposition, methane and hydrogen sulfide gas (as dissolved organic matter) can accumulate and then rise to the surface during the rare turnover events. When suddenly released at the surface, these gases can cause fish kills and even be lethal for local human residents.

Water temperature is important in determining the amount of oxygen and carbon dioxide dissolved in the water water. Both gases are most soluble in cold water and released as water warms.

The lake environment changes as nutrients and sediments accumulate. Lakes can be classified according to their nutrient load:

Eutrophic lakes are nutrient-rich and have cloudy, greenish water due to the abundance of phytoplankters. Toward the extreme end of the spectrum, eutrophic lakes are shallow since the basin is becoming filled with sediments. Most of the water column is warmed in summer and decomposition can lead to oxygen depletion. The fauna is characterized by large numbers of a relatively few species.

Mesotrophic lakes fall between oligotrophic and eutrophic conditions. They have sufficient nutrients, dissolved gases, and depth to support a species-rich fauna.

Succession begins as deep, geologically young, oligotrophic lakes are colonized by phytoplankters. When sediments begin to be deposited along the margin of the water body, a shallow littoral zone develops, a habitat suitable for rooted aquatic plants. In the shallowest water closest to shore, emergent cattails and reeds invade, as do rooted plants with floating leaves and flowers such as water lilies. These plants trap sediments and build land outward into the lake. The surface area of open water shrinks through time and eventually disappears. A wetland replaces the former lake. Woody shrubs such as alder and willow and buttonbush colonize the periphery. Later the wetland, too, vanishes and regional vegetation types take over. 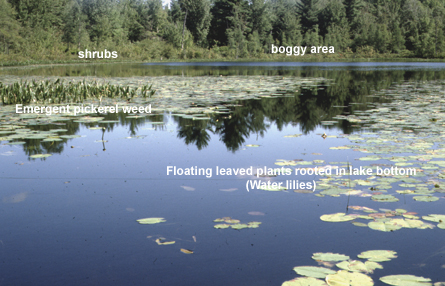 The time it takes for a lake to be converted to dry land varies. In small ponds it may be a matter of a century or two. On the other hand, Lake Baikal, which is millions of years old, is still oligotrophic.

The phytoplankton consists of mainly filamentous cyanobacteria and algae, especially diatoms. These free-floating cells congregate in the euphotic zone and will be found in both the littoral zone and the open water of the pelagic zone. Diatoms have silica supporting their cell walls and require dissolved silica to prosper. They usually are the main part of a spring algal bloom and are replaced by green algae when the silica supply is exhausted. The cyanobacteria, which tolerate low oxygen levels, may become dominant toward late summer.

Plants are found primarily in the littoral zone. Emergents, rooted in the bottom but rising above the water surface, are confined to a fringe near shore. They include such plants as cattails, reeds, pickerelweed, arrowweed, and golden club. Submerged aquatic plants are also rooted in the lake bottom and limited to shallow water near shore. The entire plant grows below the water’s surface. Examples include quillwort, pondweed, and coontail. There are also a number of plants rooted in the bottom but with floating leaves and flowers such as water lilies, spatterdock, and floating hearts. They tend to grow in the somewhat deeper water beyond the emergents. Other plants are not rooted in the lake bottom at all, but are free-floaters. These include bladderworts,duckweed, and water lettuce.

In saturated sands of lakeside beaches such plants as bulrush,  rose pogonia (an orchid), and the insectivorous sundew may flourish.

Invertebrates are represented by freshwater sponges and hydroids that attach to hard surfaces and oligochaete worms that burrow in soft sediments. Snails and unionid mussels can be abundant mollusks in shallow waters. Insects are most abundant in larval stages. Important are the larvae of caddiflies, craneflies, beetles, mosquitos, and midges.  Adult insects occur as predators feeding from the air (dragonflies and damselflies) or skittering on the water’s surface (pondskaters and water boatmen).

Among aquatic vertebrates are, of course, fishes of numerous species. Amphibians are represented by adults frogs and the tadpoles of frogs and toads. Reptiles associated with freshwater lakes are turtles, snakes, and alligators. Birds visit lakes to feed and nest. Among them are dabbler ducks such as mallards and teals and diving birds such as grebes, mergansers, loons, and anhingas. Wading birds such as herons, egrets, and ibises stalk aquatic prey in the shallows at the edge of lakes.

Note: For information on specific lakes across the globe visit the LakeNet Global Lake Database at http://worldlakes.org/lakes.asp or LakeNet “Lakes at a Glance” at http://www.worldlakes.org/lakeprofiles.asp. The latter pages give lists and specifics for ancient lakes, largest lakes, deepest lakes, and other categories.

Note: This page has been translated into Urdu by Samuel Badree at https://mobilemall.pk/blog/lakes/. He also provides a translation in Sindhi at https://www.coupontoaster.co.uk/blog/lakes-sindhi/. You may read the page in French courtesy of Hamza Ahmed at https://bestforandroid.com/des-lacs/.