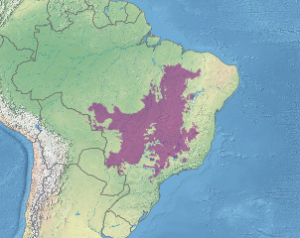 Brazil’s cerrado, growing on the oldest surfaces of the Brazilian Shield, is the largest area of tropical savanna in South America. This patchwork of plant communities represents all common types of savanna and originally covered more than 750,000 mi2 or more than a fifth of Brazil’s land area. The vegetation mosaic reflects differences in geomorphic processes, soil chemistry, fire regimes, and soil moisture. The cerrado stretches from the Equator to the Tropic of Capricorn at elevations between 1,000 ft asl and 6,000 ft asl in a region of vast plateaus or chapadas. The term “cerrado” is a Portuguese word meaning “closed” and probably was used to underscore the difficulty of riding through the densely wooded parts of the savanna on horseback.

The climate is one with distinct wet and dry seasons. During the 6- to 7-month rainy season there may 30-80 in of rain. The dry season extends from April into September. Temperatures remain warm all year, but incursions of cold air from the south penetrate on occasion during the austral winter.

Poor soils are a prime characteristic of the cerrado. These oxisols have developed on deeply weathered, heavily leached acidic shales and Precambrian crystalline rock. They are low in plant nutrients such as calcium and magnesium and in many instances contain toxic levels of aluminum. 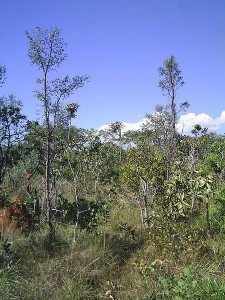 Woodland savanna or cerrado sensu stricta has trees 10-25 ft forming an open canopy above a continuous grass layer that promotes fire. The woody species are adapted to tolerate the poor soils as well as fire and the tropical wet and dry climate. The trees typically have thin, twisted trunks and branches, a thick, corky often deeply grooved bark, and gray-green leaves that are large and sandpaper-rough with thick, raised ribs showing on the undersides. The leaves of pequi (Caryocar brasiliensis) and sandpaper tree or lixeiro (Curatella americana) are prime examples. The contorted stems seem to be the result of repeated dying back of growth buds during drought, while the nature of the  bark may be means of fire protection. The leaf structures are mechanisms for the storage of excess aluminum taken up through the roots. Since almost all trees are deciduous, annual leaf fall in the dry season removes the accumulated aluminum from the plant. A few species, such as pau terra (Qualea parviflora), have evolved ways to exclude the uptake of aluminum altogether; while other species can grow only where aluminum is highly concentrated. The gray-green color is the product of a thick waterproof cuticle on the large leaves that, along with sunken stomata, limits water loss. 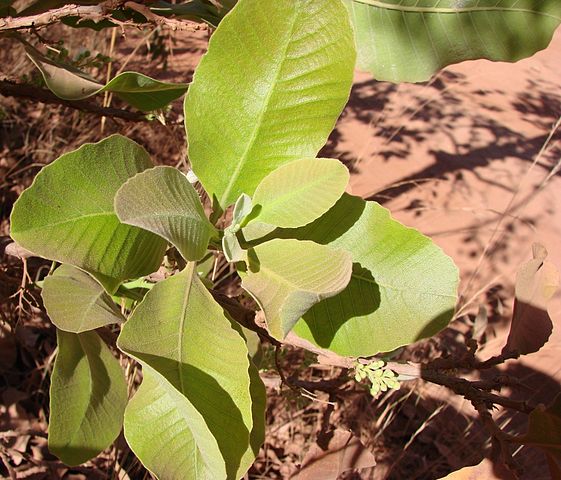 Other growthforms common in the cerrado include leguminous trees with finely divided compound leaves and species such as canela de ema (Vellozia squamata), pau santo (Kielmeyera coriacea) and pau de arara (Salvertia convallaroides) with their large leaves set as rosettes at the ends of branches. A few species are evergreen or semi-deciduous, producing new leaves at the onset of the rainy season. Subshrubs are also a common growthform. Their aerial stems die down during the dry season, but many possess a swollen woody organ below ground (xylopodium) that stores water.

Grasses are mostly perennial C4 bunchgrasses; forbs are also mostly perennial. Leguminous forbs have symbiotic relationships with Rhizobium bacteria that fix atmospheric nitrogen; while terrestrial orchids form mycorrhizae with fungi to obtain phosphorus. The many species of forbs and grasses contribute much to the high biodiversity of the cerrado, the world’s most species-rich savanna. They provide fuel for fires that recycle nutrients to the soil.

Where fires are frequent and woody plants are killed off, a grass savanna (campo sujo or “clean field”) develops. Shrub savannas (campo limpo or “dirty field”) may be intermediate between cerrado and campo sujo. There are also areas with a closed canopy of taller trees (25-40 ft high) and little undergrowth, a deciduous forest known as cerradão. In seasonally waterlogged alluvial soils, valley-side wetlands known as veredas host buriti palms (Mauritia flexuosa) in groves or as palm savannas. The buriti fruit are the main food of tapirs, peccaries, monkeys, hyacinth macaws and other parrots, and fish. Some inundated areas contain low earthmounds which may be abandoned termite mounds. These campos murundusare better drained and more fertile than surrounding flooded land and host woody plants  Dry habitats on rock outcrops support a rich flora of some 5,000 vascular plants, including cacti.

The cerrado is one the world’s 34 biodiversity hotspots. More than 12,000 plant species are known with an estimated 700-1,000 being woody plants. Thirty percent are endemic to the region and have restricted geographic distributions. The fauna is also diverse. Some 200 species of mammal have been reported, including 20 endemics. Unlike the African savannas, large mammals are represented by only a few species. Neotropical marsupials, xenarthrans (armadillos, anteaters), and caviomorph rodents such as paca and agouti are typical. The rarest mammal is the maned wolf (Chrysocyon brachyurus), a flagship species. Nearly 88 percent of mammals weigh less than 11 lbs.

Birds also are diverse with more than 850 species recorded, at least 30 of which are endemic. Most likely to be seen are ground-dwellers such as greater rhea, seriemas, and tinamous; but with 110 species the New World flycatchers comprise the most diverse family. Thirty of the 180 species of reptiles are endemic. So far 150 amphibian species have been identified, many now threatened due to water polllution.

The insect fauna is as yet poorly studied but believed to have an enormous number of species. Ants and termites are extremely abundant. Ant nests are conspicuous on tree branches and at the bases of woody plants and fence posts. Termite mounds dot the landscape of grassy savannas. An estimated 100-200 species of termite dominate the soil fauna and contribute to soil structure and habitat creation for both plants and animals, as well as energy flow and nutrient cycling in the ecosystem.

The cerrado is an endangered biome. Conversion to commercial agriculture, especially soybean,continues at an alarming rate. Large areas have also been converted to artificial cattle pastures composed of introduced African grasses. Tree plantations for Australian eucalyptus and North America pines have also claimed many acres.

Views of the cerrado: 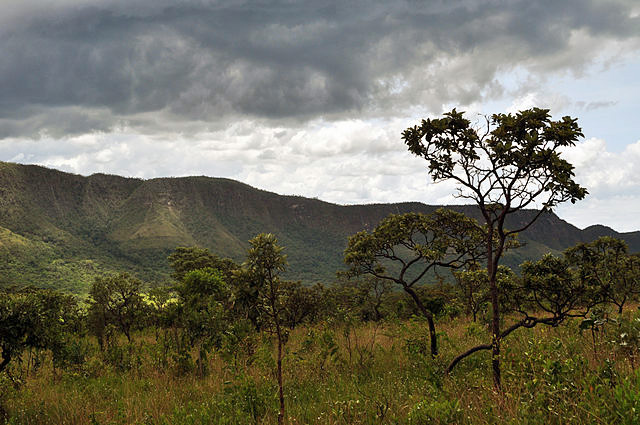 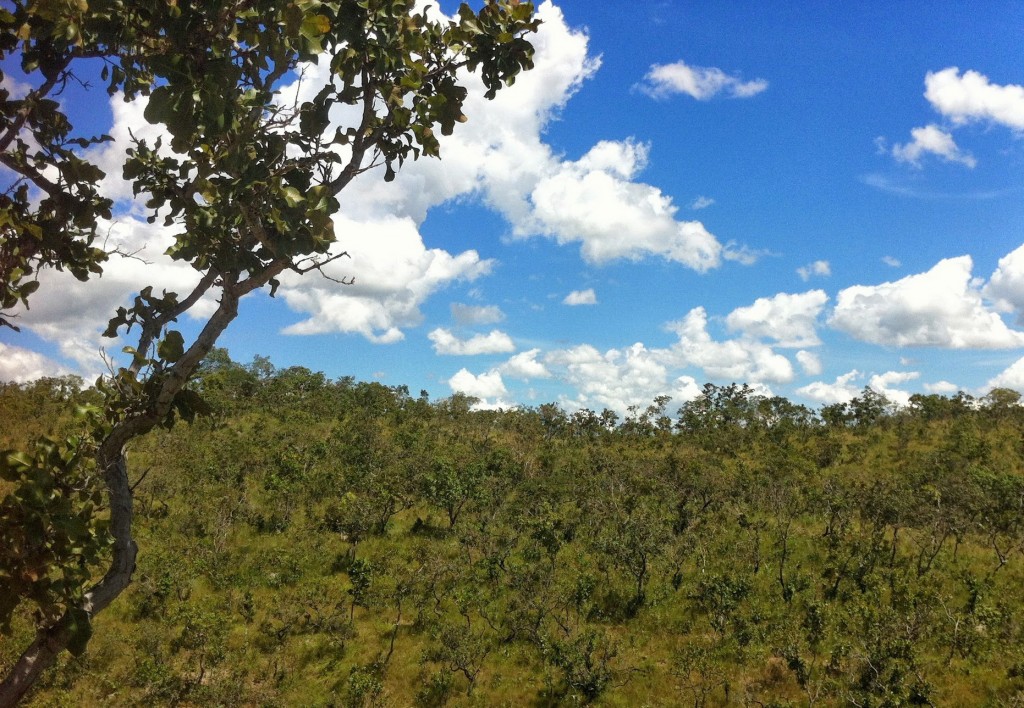