Introduction: The word tundra derives from the Finnish word for barren or treeless land. The tundra is the simplest biome in terms of species composition and food chains.

Climate: The high latitude conditions of Koeppen’s ET climate type that impact life in this biome include

Edaphic controls: Permafrost, not cold temperatures per se, is generally believed to be what prevents tree growth. Furthermore, freeze-thaw activity, a thin active layer, and solifluction during the warmer months contribute to strong controls on vegetation patterns and create a mosaic of microhabitats and plant communities.

Soil: No true soil is developed in this biome due to the edaphic factors mentioned above.

Fauna: Strategies evolved to withstand the harsh conditions of the tundra can be divided among those species that are resident and those that are migratory.

Among the small number of bird (e.g., ptarmigan) and mammal (e.g., muskox, arctic hare, arctic fox, musk ox) species that reside year-round on the tundra one commonly finds:
Morphological adaptations such as

Physiological adaptations such as ability to accumulate thick deposits of fat during the short growing season. Fat acts as insulation and as a store of energy for use during the winter, when animal species remain active.
Population adaptations such as cyclical fluctuations in population size, best seen perhaps in the lemming, a small rodent which is the major herbivore in the tundra’s simple food chain. Predator populations and plant populations respond in kind to the peaks and crashes of the herbivore populations.

Migratory species such as waterfowl, shorebirds and caribou adapt to the tundra by avoiding the most severe conditions of winter. Each year at the end of the short growing season they move southward into the boreal forest or beyond, but return to the tundra to breed.
Aperiodic emigration from the tundra is exhibited by the snowy owl during those years that the lemming populations have crashed. Those winters see snowy owl irruptions as far south as Virginia. Most owls are found with empty stomachs and do not survive to return to the Arctic.

Distribution: The tundra biome is restricted to the high latitudes of the northern hemisphere in a belt around the Arctic Ocean. Many of its species, both plant and animal, have circumpolar distribution areas.

Within the tundra biome a latitudinal zonation of communities is realized:

High Arctic Tundra: essentially confined to the islands of the Arctic Ocean and characterized by scattered lichens and mosses on bare rock surfaces and perennial forbs growing in protected crannies among sharp, ice-fractured rock debris. See also: Case Study: Svalbard High Arctic Tundra.
Middle Arctic Tundra: restricted to the Arctic Coastal plain where level terrain, a thin active layer, and freeze and thaw result in patterned ground, or rock polygons. The sorting of particles by freeze-thaw activity results in a waterlogged center to the polygons, a microhabitat conducive to sphagnum moss and sedges; and an outer ring that is drier and provides a microhabitat favorable to forbs and some dwarf heaths.
Low Arctic Tundra: the majority of the tundra lies on better drained slopes with greater depth to permafrost than is encountered on the Arctic coastal plain. Here there is a greater frequency of woody shrubs: willow, birch, and various berry-bearing members of the heath family. Along streams willows and alders may be 10 feet high. On south-facing slopes needleleaf evergreen trees (spruce and fir) are established and represent the northernmost extensions of the great boreal forest to the south. (Such areas where two biomes interdigitate are known as ecotones.)

Many tundra species can be found at high elevations in the mountains of the northern hemisphere. The arctic-alpine lifezone of high elevations experiences a different climate–in terms of daylength and seasons–than does the true tundra of the Arctic. However, thin soils and cold temperatures create an environment that many middle latitude trees cannot tolerate and thus allow tundra species to invade and thrive.

In the northeastern US, in the Presidential Range of the White Mountains, New Hampshire, treeline occurs at approximately 4,500 ft asl. A band of krummholz, patches of stunted balsam fir and black spruce shaped by the wind into flag trees, marks the lower limits and extends to elevations of approximately 4,000 ft to as high as 5,400 ft. The arctic-alpine zone’s vegetation is dominated by dwarfed heaths, including Labrador tea, Lapland rosebay, alpine azalea, cranberries, alpine bearberry, and diaspensia. Herbaceous perennials such as mountain sandwort find shelter among the rocks of the felsenmeer that characterizes the summit regions. In addition to the Presidential Range, in which New England’s highest peak—Mt. Washington (6,288 ft asl)—is located, Mt.  Katahdin in Maine (5,267 ft), Mt. Mansfield in Vermont (4,393 ft), and Mt. Marcy in New York (5,343 ft) also host arctic-alpine tundra. 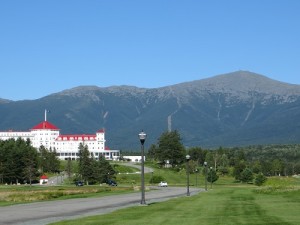 The arctic-alpine zone is clearly visible on Mt. Washington, NH, where the weather station on the summit has recorded some of the harshest conditions on Earth, including wind speeds in excess of 200 mph. Usually enveloped in clouds, the mountain top experiences an average 44 sunny days a year. 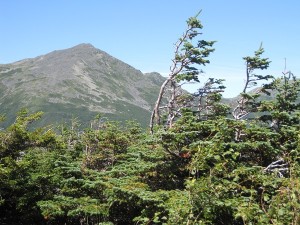 Flag trees of the krummholz on Mt. Washington 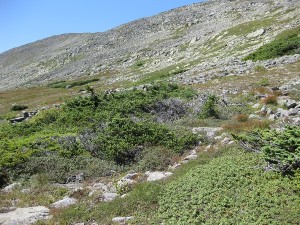 Patches of krummholz on Mt. Washington 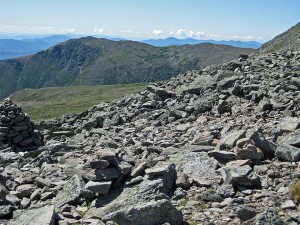 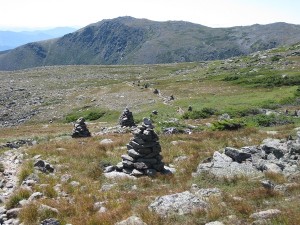 Cairns are closely spaced in the Alpine Gardens on Chandlers Ridge on Mt Washington to guide hikers through dense fog. Even so, climbers are cautioned to turn back if conditions deteriorate. Some 140 people have died on the mountain due to accidents or exposure. Many of the deaths have occurred during summer months, when climbers suddenly experience temperatures below freezing  and strong winds above the headwalls of the several cirques. 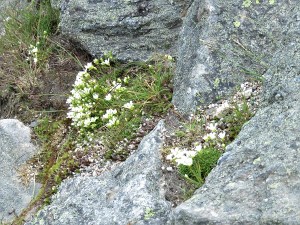 In the tropics, the climate of very high elevations is extremely different than that of the Arctic. Freeze-thaw, instead of following a seasonal cycle, follows a diurnal cycle. Also, the peaks are isolated from the Arctic tundra. Often endemic species derived from a tropical flora or from Antarctic flora create the unique communities of tropical high mountain tops. Read more under Life Zones.