Puna refers to the cold, high-elevation grassland of the Central Andes of South America. Occurring at elevations of 9,850−16,400 ft asl, it is found from northern Peru through western Bolivia into northern Chile and Argentina. It extends over nearly 20° of latitude, from approximately 3° S to about 22° S. Much of the puna lies in the rainshadow of the eastern range of the Andes, primarily on the Altiplano, the high plateau between the Cordillera Occidental and Cordillera Oriental. Topographic and climatic differences along this expanse of high plateau account for different regional plant vegetation types known, respectively, as High Andean Puna, Wet Puna, Wet Montane Puna and Dry Puna. Local conditions of soil, drainage, and aspect also result in a variety of plant communities, including steppe, tolares or shrublands of resinous plants such as Baccharis spp., open Polylepis woodland, salares or salt flats with halophytic species, and bofedales or fresh water bogs and fens with large cushion plants. Nonetheless, the characteristic vegetation consists drought-adapted bunch- and tussock grasses, low shrubs of the daisy family, and ground-hugging rosettes. The giant rosettes and towering inflorescences of “queen of the Andes”, Puya raimondii, an endangered terrestrial bromeliad, are patchily distributed on rocky slopes at elevations generally above 13,000 ft. Many genera found on the páramo also occur on the puna; in addition, some 40 genera are endemic.

Indigenous people have grazed their llamas and alpacas on the puna for millennia; and since the Colonial Period sheep and goats have also grazed there. Large swathes of territory in the northern wet puna were terraced for agriculture before the time of the Inca and many terraces are still in use. Combined with the grazing of domestic livestock, traditional and contemporary farming have altered the high grasslands to the extent that few if any truly natural areas remain. 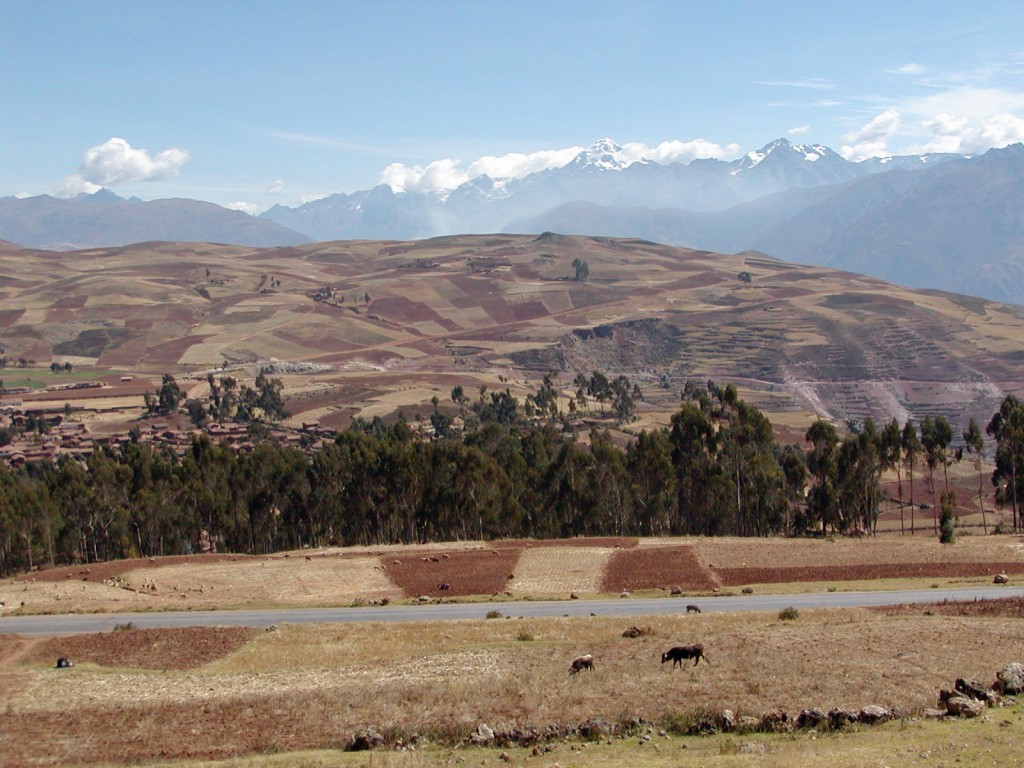 Agriculture has altered the puna over millennia.
Photo by author

Climate. The eastern puna receives the most precipitation, with mean annual totals of about 30 inches. To the west and south, especially south of 15° S, conditions become drier and the puna transitions into the Atacama desert along the borders of Bolivia, Chile, and Argentina. Together with increased aridity comes a longer and longer dry season. Temperatures also reflect differences in latitude; southward, seasonal temperature ranges become greater and winters become colder. Temperatures of -5° F have been recorded on the Altiplano in Peru, where as a daily minimum of -22° F is reported from Bolivia.

Vegetation. High Andean Puna occurs from about 13,800 ft asl to snowline in a zone where nighttime temperatures regularly drop below freezing. Precipitation is mostly snow or hail. Tussocks of Peruvian feathergrass or ichu (Stipa ichu), fescues, and endemic Dissanthelium spp. grow among low rosettes, cushion plants such as Azorella and Pyncophyllum spp., and dwarf shrubs. Bofedales have large submerged or floating cushions.

Wet puna occurs on the Altiplano from northern Peru to northern Bolivia at elevations of 12,100−13,800 ft asl. Northern parts in the vicinity of Lake Titicaca receive 20−28 inches of precipitation and experience a 4-month long dry season. Toward the southern margins of the wet puna, the dry season lasts eight months. Nighttime frosts occur from March through October. In this landscape of snow-capped peaks and high lakes, vast pastures on lower slopes are covered mostly with ichu grass. Shrubs and open queñoa woodlands (Polylepis tomentella) are found in certain areas. The endemic tree Buddleja coriacea is another woody species of the wet puna. Poorly drained areas support sedges, rushes, and bulrushes. 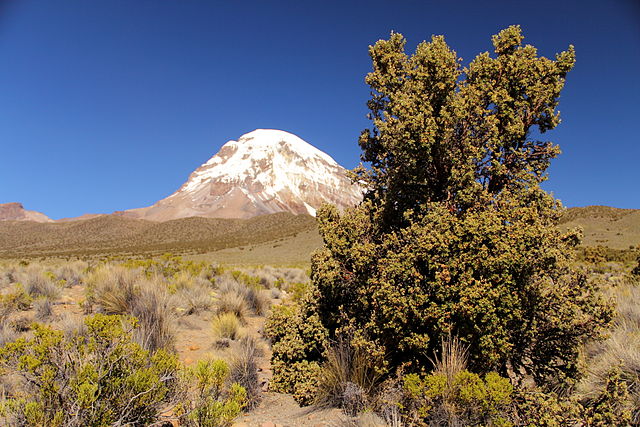 The world’s tallest bromeliad, the queen of the Andes (Puya raimondii), can be found in wet puna. It has a basal rosette that can be as much as 10 ft in diameter and once in its lifetime sends up an inflorescence up to 15 ft tall. As many as 20,000 small flowers appear on the stalk, protected from the cold by hairy bracts. 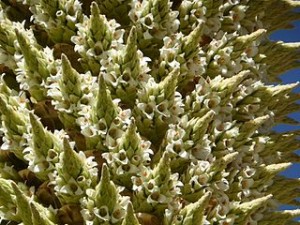 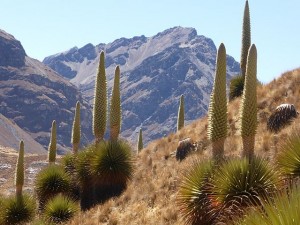 Wet Montane Puna is found in the steep mountains and glacial valleys of the Cordillera Real east of the Wet Puna. These grasslands contain species not found in the Wet Puna, including cudweeds (Gnaphalium spp.), the fern Blechnum loxense,  and a couple of shrubs in the daisy family, Loricaria ferruginea and Achirocline sp.

Dry Puna is a shrub-steppe on the slopes of the Cordillera Occidental in Bolivia and northern Chile and Argentina at elevations of 11,500−16,400 ft asl. It borders the Atacama Desert in the west at 6,500 ft in tropical latitudes and 11,500 ft south of Antofagasto, Chile. The area receives only 2−16 inches of rain each year and has an eight-month long dry season. Alpine herbs and dwarf shrubs, mostly of the daisy family are dominant elements of the vegetation. Bright green cushions of yareta (Azorella compacta) stand out on well-drained slopes. In flat areas on streams and ponds, bofedales form with floating and submerged cushions of Plantago rigida, Distichia muscoidesand other forbs. 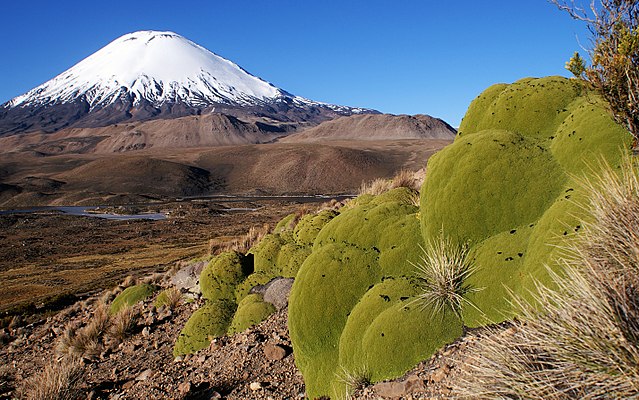 Vast salt flats (salares) have formed on the Altiplano of this semi-arid, internally drained plateau. One of the largest in the world is in southwest Bolivia, Salar de Uyuni. Halophytic plants such as saltbush, saltgrass, pickleweed, and seepweed grow along the shore of thee former lakes. Old Man of the Andes cactus (Oreocereus celsianus) with its long white hairs and other columnar cacti grow on some islands in the Uyuni salt flats. 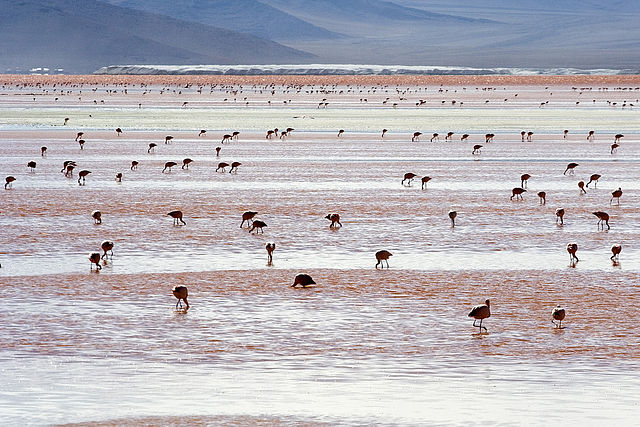 Animal life. Animals of the puna must be adapted to low oxygen levels, prolonged drought, and winter-like nights. Both of the native camelids—vicuna and guanaco—graze these high pastures. Viscacha (Lagidium spp.), chinchilla (Chinchilla brevicaudata) and the Andean hairy armadillo (Chaetophractus nationi) also live at these heights. Culpeo or Andean fox (Lycalopex culpaeus), the small and rare Andean cat (Leopardus jacobita), and puma prey on the herbivores. The flightless Darwin’s or Lesser Rhea (Rhea pennata) occupies the puna too. The Puna Tinamou (Tinamotis pentlandii), apoor flyer, is a common ground bird. Several species of flamingo visit the briny lakes in salt pans: the rare and endangered James Flamingo (Phoenicopterus  jamesi) and Andean Flamingo (P. andinus) and the Chilean Flamingo (P. chilensis). 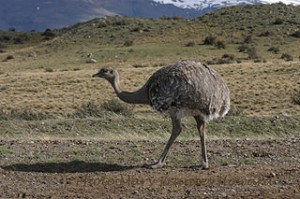 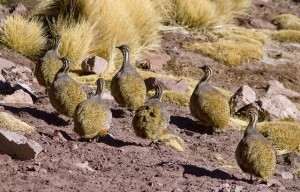 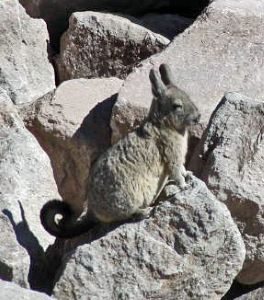 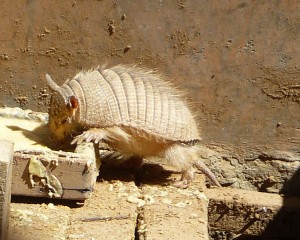 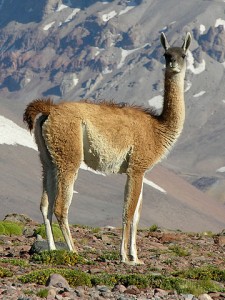 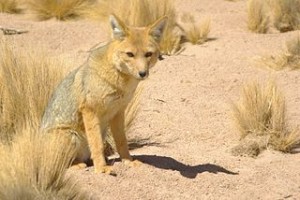 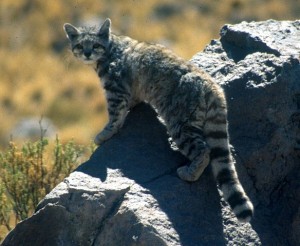