The world’s largest lake (in terms of surface area) is a saline lake, the Caspian Sea. Most such lakes are a result of interior drainage wherein streams or snowmelt waters feed into lakes that do not possess outlets. Water loss instead occurs solely by evaporation, which leaves behind dissolved salts that become more and more concentrated over time. In chemistry, a salt is defined as a compound that dissolves in water to form a positively charge ion and a negatively charged ions. The compounds dissolved in saline lakes are chlorides, sulfates, and carbonates.

The salinity or salt content of saline lakes varies from 3 ppt to more than 300 ppt. For comparison, seawater has a salinity of 35 ppt. Lake Assal in the Danakil Depression in Djibouti has a salinity of 348 ppt, making it the most saline lake in the world outside of Antarctica. In the McMurdo Dry Valleys of Antarctica, Don Juan Pond is a hypersaline body of water with an estimated concentration of calcium carbonates of >600 ppt. (The salt acts as an antifreeze. Temperatures would have to fall below -61°F [-51.8°C] for the water to freeze!) The Dead Sea has a salinity of 337 ppt, making it ten times as salty as the ocean. 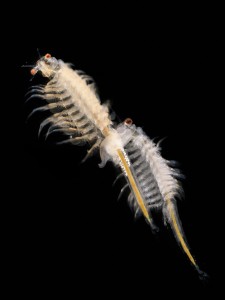 Saline lakes with high concentrations of salt have simple communities. Great Salt Lake in Utah, for example, supports planktonic diatoms and other algae, brine flies and brine shrimp. Its salinity ranges from 50 to 270 ppt depending on the volume of water present at any given time. The Caspian Sea, on the other hand, has a salinity only of 10-12 ppt and contains 450 species and subspecies of phytoplankters, as well as fishes, reptiles, and an endemic seal.

Soda lakes, those saline lakes with high concentration of carbonates and bicarbonates, occur in the craters of volcanoes lining Africa’s Eastern Rift Valley. Lake Nakuru in Kenya is known for the great number of flamingos that congregate there to nest and raise their young, safe from most predators that will not brave the caustic lake  muds. Soda lakes also occur on the high Altiplano of South America, where they are fed by snowmelt off the Andes. In the rainshadow of the mountains, the climate of these closed basins is dry and evaporation rates are high. Flamingos (of species different from those of Africa) also breed on these lakes. 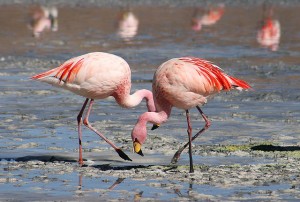 Most saline lakes are shrinking and turning into salt pans or playas. Salar de Uyuni on Bolivia’s  Altiplano is the world’s largest such pan. A film of water covers its surface only during the rainy season. It and Salar de Atacama are among the world’s major sources of lithium.

Makgadikgadi Pans in Bostwana are one of the world’s largest complexes of salt pans. (The largest pan is about half the size of Salar de Uyuni) They maintain an ephemeral link to the Okavango Delta via the Boteti River that occasionally carries water to the pans. When they do flood, they are visited by tens of thousands of breeding waterbirds, including flamingos.