This forest, which was once continuous along 1,850 miles of the southeast coast of Brazil from 5°30′ S to 30°S, is ranked as one of 35 biodiversity hotspots identified on Earth.. It is estimated that 7 percent of Earth’s plant and animal species live in this forest, including some 1,000 species of birds, 450 amphibians, 24 primates, 2,100 butterflies, and 18,000 flowering plants, of which 8,000 are found nowhere else on the planet. 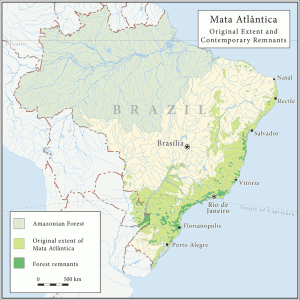 Originally the forest stretched along the narrow coastal plain and coastal mountains of Brazil from Rio Grande do Norte south to Rio Grande do Sul, with extensions onto the Borborema Escarpment in the north and the Paraná Plateau in the south. It is separated from the Amazon rainforest by the drylands of the caatinga (thorn scrub) and cerrado (woody savanna); and its plant and animal components are more closely related to those of the cerrado and chaco than the Amazon. Endemism is high. Exploitation and clearing began with Portuguese settlement  in 1500, for the export of dye-producing brazilwood and of sugarcane in the north and for cattle-raising in the south. The forest has been reduced in area from an original 502,000 mi2 to remnants adding up to approximately 38,000 mi2 today.

The composition changes from tropical moist evergreen forest in the north to tropical semideciduous and deciduous forests inland to a subtropical rainforest in the south. The variety of vegetation types and habitats is increased by elevational differences; the Atlantic Forest occupies rugged mountains as well as lowlands. The Serra do Mar in the south reach elevations of 2,600-4,000 ft asl, and peaks in the Mantiquiera Mountains are above 5,000 ft asl. At lower elevations on moist, windward slopes trees may by 115 ft tall with an open canopy that permits sunlight to penetrated and support lianas and epiphytes and understory of palms and tree ferns. Structure is similar to that of the Amazon rainforest, although emergent trees are absent. Between 3,600 ft asl and treeline (approximately 4,500 ft), a fog forest of stunted trees is covered with epiphytic lichens, mosses, ferns, bromeliads, and orchids. Candelabra-shaped Araucaria angustifoliatrees, Gondwanan relicts, dominate high elevation forests. Rock-strewn areas above treeline support tussock grasslands. To some degree, the high biodiversity of the Atlantic Forest is a product of the large number of plant associations and environmental conditions encompassed by the single designation “Atlantic Forest.” 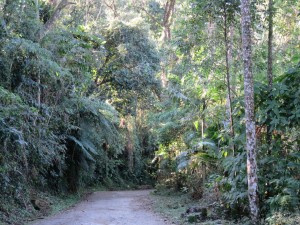 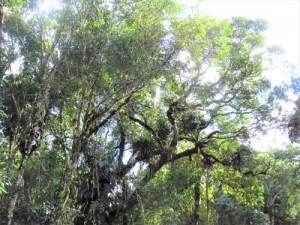 Montane “fog forest” with bromeliads and other epiphytes 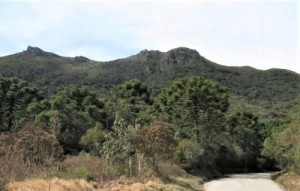 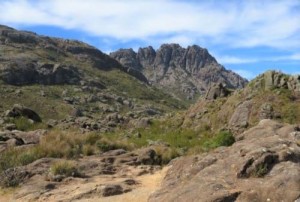 Above treeline in the Mantiqueira Mountains

Species-rich groups of birds include hummingbirds, New World flycacthers, woodpeckers, piculets, tree creepers, spinetails, antshrikes, antwrens, and the very colorful tanagers and their close relatives. Parrots, parakeets, and parrotlets fly noisily through and above the canopy.

The endangered golden lion tamarin is the flagship species of the Atlantic Forest. Three other rare lion tamarin species (black lion, golden-headed and black-faced) also occur in isolated and very restricted distribution areas. The largest of the endemic primates is the muriqui or woolly spider monkey, which weighs 10-20 lbs. The largest mammal is the South American tapir. A variety of Neotropical marsupials, xenarthans, and caviomorph rodents can still be found, as well as carnivores such as tayra, coati, kinkajou and several cats . 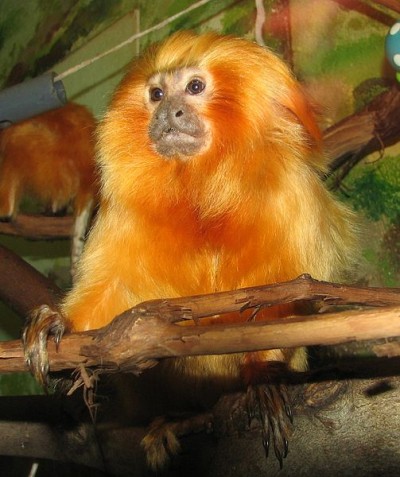 The Atlantic Forest remains vulnerable to further reduction and fragmentation. Only about seven percent is considered undisturbed and most of this in inaccessible, mountainous areas. It is believed that 171 of Brazil’s 202 endangered species live in these small isolated patches. Brazilwood (Caesalpina echinatua) or pau o Brazil or pernambuco), prized for its red dye and the first forest product exploited, is nearly extinct in the wild.

Much of the Atlantic Forest survives in small patches interspersed among agricultural lands and towns and cities.