Salt marshes are found in sheltered intertidal areas, especially in the temperate regions of the world. (In the tropics similar environments usually support mangroves.) Perennial grasses, the cordgrasses (Spartina spp.) in particular, dominate, but forbs and succulent subshrubs also occur. All are halophytes, plants adapted to highly saline conditions. Various strategies have evolved to deal with salt. Plants may:

Many close relatives of salt marsh plants are found in deserts, where high salt concentrations can also occur.

Salt marsh grasses actually build up their habitat as they trap fine sediments washed from the uplands in their masses of stems, roots, and rhizomes. As the level of the marsh rises, tidal creeks erode deep channels through it. The surface becomes uneven and a variety of habitats are created: lagoons, salt pannes and  pools, and natural levees among them.

Zonation of plant communities occurs from the upper shore to the lowest part of the marsh. In the high marsh, which is only submerged during the highest spring tides and severe storms, rainfall and runoff dilute salt concentrations and flush them from the sediments. Cordgrasses, reeds, and glassworts grow in this region. The midshore tends to be the most saline habitat and is occupied primarily by succulents such as sea blites (Suaeda spp.) and glassworts. In the low marsh, evaporation rates are depressed (since exposure time to the air is less) and accumulated salts are flushed out by the tide. However, sediments remain saturated at low tide and oxygen depletion becomes a problem. Many plant species in the low marsh have fine roots at the surface through which take in oxygen from the air and send it via specialized tissues called aerenchyma to deeper roots. Some oxygen leaks from these roots and oxygenates the bottom sediments. Smooth cordgrass (Spartina alterniflora) dominates.

Salt marshes are among the world’s most productive plant communities, yet relatively few herbivores consume salt marsh plants. Sucking insects such as aphids and grasshoppers are important grazers, as are vertebrates such as geese and muskrats. Huge amounts of dead plant material amass each year. Its decay further depletes oxygen, often to the extent that anaerobic bacteria take over the decay process. The distinctive odor of exposed mudflats comes from hydrogen sulfide gas, a by-product of anaerobic decay. Detritus food chains are predominant in the low marsh. Marsh periwinkles and amphipods shred dead grasses as they consume them. Unconsumed particles fall to the floor of the marsh, where they feed fiddler crabs and snails as well as filter-feeders such as ribbed mussels and oysters.  Carnivores in the detritus food web include fish such as killifish, rails, herons, and raccoons.

Animals in the marsh must deal with exposure to rapidly changing salinities and periodic flooding and exposure to the air. Furthermore, tidal movements could sweep them out of the marsh. Many burrow into the bottom sediments to escape predators and dessication during low tide. Fiddler crabs, which feed on the surface during low tide, plug their burrows with mud as the tide comes in, preserving a pocket of air for the time the marsh is inundated. Marsh perwinkles, in contrast, must escape predators such as blue crabs during high water, so they climb up the cordgrass stems ahead of the rising tide.

SOME INVERTEBRATES of THE SALT MARSH: 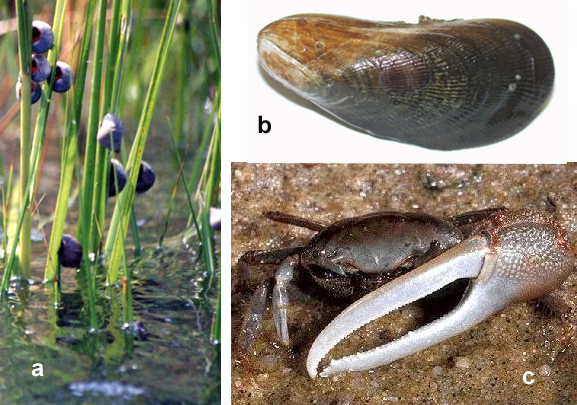 THE MARSH and a KEY PREDATOR: