Four major areas of permanent upwelling are associated with the cold eastern boundary currents of the Pacific (Humboldt Current and California Current) and Atlantic (Benguela Current and Canary Current) oceans. Another area of upwelling is seasonal and forms in the northwestern Indian Ocean (Somali-Arabian Sea upwelling system) as a consequence of the Asian monsoon. Each area lies adjacent to a coastal fog desert, itself the product of the cold current offshore.

Upwelling brings nutrients that had sunk to the depths up to the surface. Each area, therefore, supports or has in the past supported, a rich pelagic fishery, usually of anchovies or sardines. Flatfish are important bottom-dwelling fish near shore.

The fish typically attract huge numbers of seabirds that breed and roost on the headlands of the coast or on offshore islands. So-called guano birds—cormorants, pelicans, and boobies—occurred in such large populations that their droppings (guano) collected in thick deposits and were mined for fertilizer. In the Southern Hemisphere, penguins contributed to the guano accumulation. Sea lions and fur seals occur in both hemispheres in these areas of low precipitation and cool ocean water. 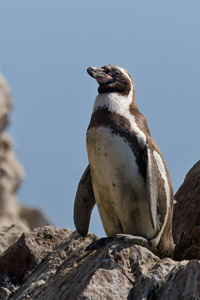 The waters off Peru, influenced by upwelling and the Humboldt or Peru Current, have the highest primary productivity among the five areas. Until the 1970s, Peru was the world’s leading fishing nation, measured by tons of catch. Most of this consisted of sardines and anchovies that were ground into fish meal to feed poultry and livestock in more developed countries. Overfishing and a severe El Niño, combined with the rise of soybeans as the world’s preferred animal feed, led to the demise of this fishery. Overfishing caused a significant decrease in fish populations and led to population crashes among the guano birds from which they still have not fully recovered. Today preserves protect these birds, as well as the Humboldt Penguin and endangered Peruvian Diving Petrel. 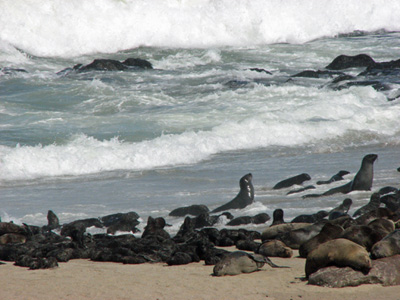 Sea lions on coast of Namibia