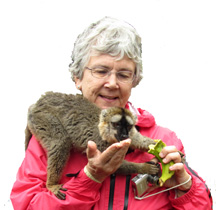 Dr. Susan L. Woodward taught biogeography to undergraduates at Radford University in Virginia for more than 20 years, retiring from the classroom in 2006. She had received an A.B., cum laude, from Middlebury College, with a major in geography, in 1965. Four years later she received an M.A. in geography from The University of Arizona, where she studied with Dr. Paul S. Martin. Her thesis dealt with the Chihuahuan desert vegetation surrounding the Murray Springs mammoth site. At UCLA, where she earned a Ph.D. in 1976, she worked with Dr. Jonathan D. Sauer and Dr. Charles F. Bennett. Her doctoral work focused on the behavioral ecology of the feral burro in the American Southwest.

Susan’s interest in drylands ecology led her to the caatinga in Brazil to see barrigudas. While there she offered short courses in desert biogeography at the Federal University of Pernambuco and the State University of Rio Claro. Upon retirement, she ventured to South Africa and Namibia and succeeded in a quest to see Welwitschia mirabilis firsthand. More recent travels have taken her to Madagascar and Kenya. Still, her heart remains in the Sonoran desert and in the Maine woods.

This website in its original form as a module of the Virtual Geography Department got the attention of editors at Greenwood Press, who invited Dr. Woodward to prepare a book on terrestrial biomes. That work led to other publications with the same press and its parent company, ABC-CLIO.

In addition to traveling and writing science books for students and the general public, Susan nurtures a small collection of orchids and plays the flute and is being trained by a beautiful little cat named Caatinga. She may be reached at swoodwar@radford.edu.

2007. “The Present Vegetation of the Murray Springs Area and Upper San Pedro Valley,” Chapter 3 in Murray Springs Site Report, Anthropological Papers of the University of Arizona.

2002.  Indian Mounds of the Middle Ohio Valley: A Guide to the Mounds and Earthworks of the Adena, Hopewell, Cole, and Fort Ancient People. The McDonald and Woodward Publishing Company, Blacksburg, VA (expanded and revised version of 1986 publication. First author, with J. N. McDonald).

1996. “Relatives of the Horse,” in Sandra Olsen, ed., History of the Horse. Carnegie Museum of Natural History, Pittsburgh

1995.  A Guide to Endangered and Threatened Species in Virginia. Virginia Department of Game and Inland Fisheries. (Editor and Abridger). Blacksburg, VA: The McDonald & Woodward Publishing Company)