Seamounts are steep volcanic mountains rising at least 3,500 ft above the seafloor, but not high enough to break the surface and be islands. Most occur in chains at hot spots or along plate boundaries. Some, such as those northwest of the Hawaiian Islands were formerly mountains: but when they moved off the hot spot and became extinct volcanoes, they sank beneath the sea. Flat-topped seamounts are known as guyots. 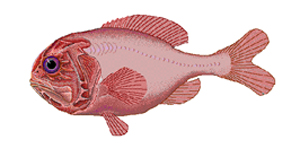 Seamounts divert ocean currents and force upwelling, creating isolated areas of highly productive waters in the otherwise nutrient-poor open sea. Shallow seamounts support kelps and crusts of coralline algae on exposed rocks and phytoplankters in the water. Dense populations of mysid shrimp, squid, and lanternfish will form, with large congregations of fish such as orange roughy consuming them. Open sea predators—sharks, rays, tunas, and swordfish—are attracted to the abundance of prey species.

Rocky outcrops exposed to fast currents that bring in food and take away wastes support deep sea coral forests and gardens. They are built by cold-water corals such as tuft coral, black corals, hydrocorals, octocorals, and host many other cnidarians, as well as sponges. Some (too many) of the corals, especially gold, red (or precious), and pink deep sea corals, are exploited by the jewelry industry as semiprecious gems. Among the fish visiting the coral structures are blackbelly rosefish, morid cod, red bream, and roughy, conger eel. Groupers, snappers, and sharks comprise the top carnivore biota.

Cold-water corals: a. gold coral and pink coral; b. an octocoral; c. bubblegum coral with grenadier (all photos courtesy of NOAA)