Continental shelves are the submerged margins of continent that stretch seaward from the extreme low-tide mark to depths of approximately 600 ft below sea level, at which point the sea bed drops precipitously (continental slope) to the sea floor. 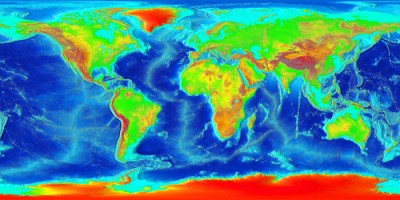 The continental shelf is depicted in light tourquoise.

The width of the shelf depends upon the area’s geologic history: narrow shelves occur at active plate boundaries, the broadest on the trailing edges of moving plates. Continental glaciation also plays a role by depressing the continental mass, such as currently seen on Antarctica, and by lowering sea level, as happened during the Pleistocene glaciations. Interglacials and contemporary climate change equate with higher sea levels, extending the shelves farther onto the continent.

The seabed (benthos) together with the shallow, sunlit waters of the neritic zone comprise some of the most productive and economically significant parts of the ocean. As much as 90 percent of the global catch of shellfish and finfish comes from the continental shelf biome. Many seabirds and marine mammals also find sustenance in this biome.

The nutrients supporting the rich and diverse marine life comes from both the land and the sea. Stream runoff is an extremely important source. Wind, tide, and tidal and shelf-edge fronts serve to keep the nutrients in the euphotic layer of the water column. Upwelling returns nutrients than had settled to depth to the surface at specific west coast locations associated with the major cool eastern boundary currents (the California, Humboldt, Canary, and Benguela currents).

Highly productive communities in the continental shelf biome include: