Introduction. In 1889 C. Hart Merriam studied the distribution patterns of plants and animals in a broad swathe from the lower elevations of the Grand Canyon to the top of Humphreys Peak (elevation 12,760 ft) in the San Francisco Mountains near Flagstaff, Arizona. Based on his observations in the field, Merriam developed the concept of a Life Zone, a belt of vegetation and animal life that is similarly expressed with increases in altitude and increases in latitude.

In Arizona, where relief is high, Merriam delineated six different life zones and correlated these with latitudinal vegetation zones ranging from Sonora, Mexico, to the Arctic coast of Canada. He tried unsuccessfully to associate the boundaries of his life zones with mean annual temperatures; to match faunal distribution patterns to his zones; and to apply them on a continent-wide basis; yet the basic scheme survived and continues to be used by researchers in western North America. For descriptive purposes Merriam’s life zones are a simple, straight-forward classification of readily observed vegetation patterns that work well in the area in which they were devised.

Below are brief overviews of the characteristics of the life zones as they occur in Arizona. Note that there are ranges of minimum and maximum elevations for each zone. The location of boundaries between life zones varies according to slope exposure, especially. In the northern hemisphere, zones will be higher on south-facing slopes than north-facing slopes. Note also that some life zones contain more than one biotic community, reflecting the climatic and ecological variation that so characterize mountainous areas. 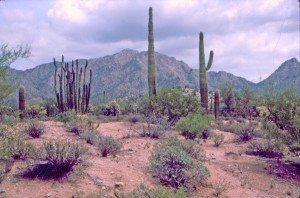 Lower Sonoran Life Zone. This vegetation of this life zone corresponds with the hot deserts of the southwestern United States and northwest Mexico (the Mojave, Sonoran, and Chihuahuan deserts). Creosotebush (Larrea tridentata) and other desert shrubs and succulents occur at elevations from 100 ft to 3,500-4,000 ft above sea level. Total annual precipitation averages 10 inches or less.

Canadian Life Zone. The fir forest of this life zone is dominated by Douglas fir (Pseudotsuga menziesi). White fir (Abies concolor) is also characteristic. In some places pines (other than Ponderosa) are also common. Deciduous broadleaf trees such as Gambel oak (Quercus gambeli), and quaking aspen (Populus tremuloides) can also be found here. The elevation of the Canadian zone in Arizona ranges from 7,500-8,000 ft to 9,000-9,500 ft; and precipitation from 25 to 30 inches.

Arctic-Alpine Life Zone. Occurring above treeline, this life zone corresponds to the Arctic tundra. Two main habitat types are found on the wind-swept peaks of the highest mountains: a tundra rock field where lichens predominate, and an alpine tundra-meadow with herbs, grasses, sedges, rushes, mosses, and lichens. Tree line on Humphreys Peak, the highest summit of the San Francisco Peaks, occurs at 11,000 to 11,400 ft. Snow-covered from late November to early April, the summit area receives from 33 to 40 inches of precipitation a year.

An interesting biogeographic note: Some 50 species of plants occur in the Arctic-Alpine Life Zone in Arizona. Forty percent of these are disjunct from the true tundra of the higher latitudes, and 15 of these are circumpolar in their distribution–meaning that they occur in Arctic areas of both Eurasia and North America. Only two plant species are endemic; one of these is a groundsel (an herb of the genus Senecio). Remember this biogeographic pattern when you look at and compare high alpine flora in the tropics.

Merriam’s Life Zones in the eastern US

When Merriam’s Life Zones are applied to altitudinal zonation patterns in the humid eastern United States, an obvious difficulty occurs in trying to equate anything with the Lower and Upper Sonoran zones. To overcome this problem, Merriam substituted the name Austral (meaning southern) for Sonoran in the broad continental expression of his vegetation belts. However, even that name is rarely used. In general it is only the uppermost three life-zones–the Canadian, Hudsonian, and Arctic-Alpine–that are applied descriptively in the East where mountains rise above the regional forest types. And often the Canadian and Hudsonian zones are combined into a Boreal Life Zone.

Altitudinal zonation in the tropics

Vegetation zonation on mountains in the tropics does not replicate the latitudinal belts of vegetation of the middle and higher latitudes even though mountain peaks may extend well above snowline. In part this is due to the fact that the seasonal cool and cold temperatures of the middle and high latitudes are not experienced in the tropics. Instead, it is diurnal temperature patterns that are important. At high elevations nocturnal frosts may occur
nearly every day throughout the year; while daytime temperatures are quite warm. Seasons in the tropics are distinguished on the basis of precipitation patterns. 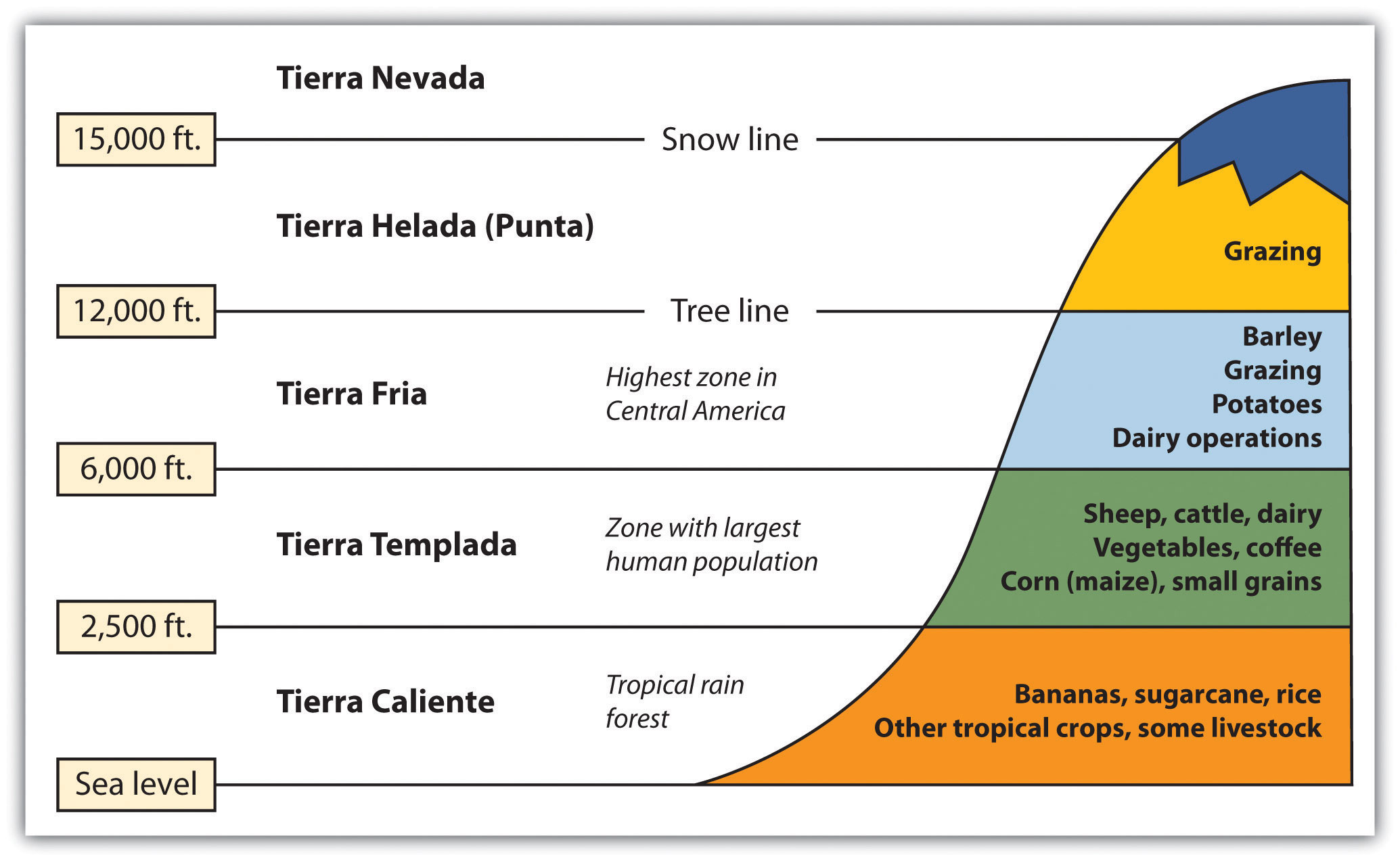 Plant species of the high alpine zones of the tropics, particularly in the southern hemisphere, are taxonomically related to the southern hemisphere temperate zone and antarctic floras. There are interesting convergences in
lifeforms between the alpine flora of the Old World and New World tropics and, indeed, between some animal taxa, too. For example, the hummingbirds (Trochilidae) of the high Andes have their counterpart in East Africa in the
sunbirds (Nectarinidae).

Among the best examples of convergent evolution are the giant senecios (Dendrosenecio spp.) and giant lobelias (Lobelia spp.) of the afroalpine zones on Mt. Kenya, Mt. Kilimanjaro,and the Rwenzori Mts in East Africa and their counterparts in the Andes, the frailejones (Espletia spp.) and puya (Puya spp.).

For all the similarities, there are also distinct differences between the mountain zones of South America and of East Africa reflecting the very different geologic history of the two continents. The Andean Cordillera of South America is a continuous range of mountains stretching along the entire west coast of the continent, the result of mountain building associated with continental drift. In East African a disjunct chain of mountains ranges from Ethiopia to South Africa. Individual peaks and ranges have different ages, origins, and geologies. Instead
of forming a long corridor as the Andes do, Africa’s mountains are more or less islands onto themselves.

Spectacular mountains rise above snow line in the equatorial region of East Africa. Included among these are Africa’s highest peak, Mt Kilimanjaro (5,895 m or 19,340 ft) in Tanzania; Mt. Kenya (5199 m or 17,058 ft) just 200 miles to the north in Kenya; and the Rwenzori range (with peaks above 5000m or 16,000 ft)–the fabled Mountains of the Moon–along the Uganda-Zaire border.

From 4000 m to snowline at about 5000 m, is the Afro-alpine Zone (similar in many respects to the paramos of the northern Andes of South America),dominated by tussock sedges (Carex spp.) and rushes, proteas, red-hot pokers (Kniphofia), and–most distinctively–giant lobelias (Lobelia spp.) and tree groundsels (Senecio spp.). The lobelias–familiar North American forms of the genus are small herbaceous plants– may be 7 to 8 feet tall, while the arborescent groundsels may stand 30 feet high. 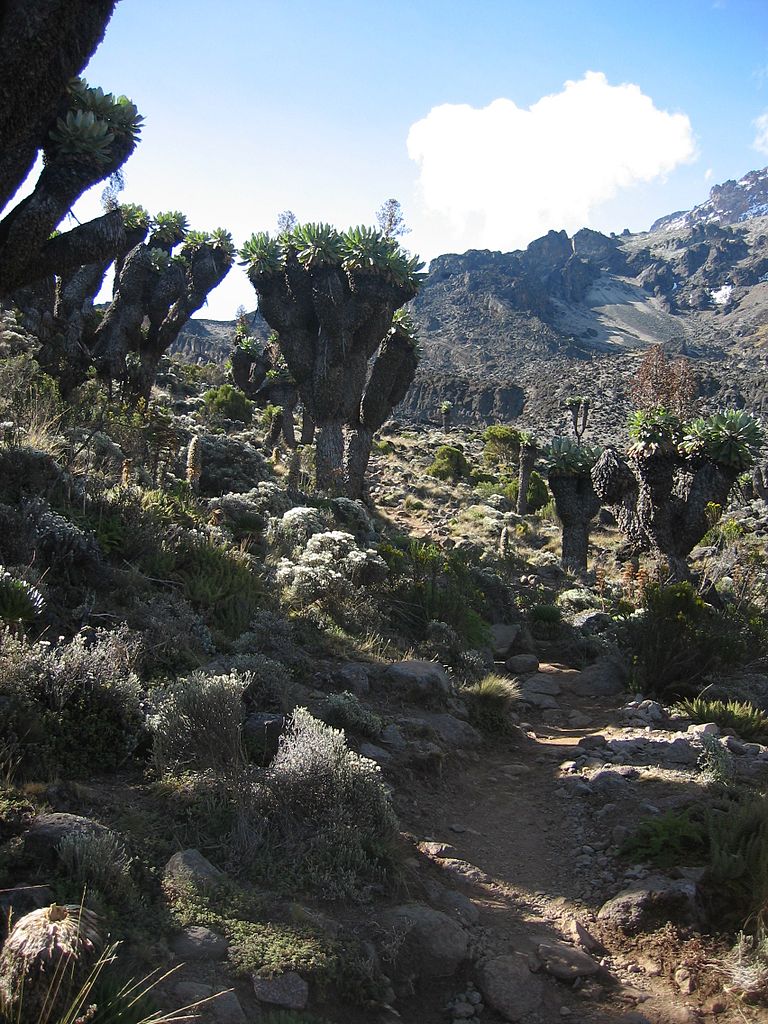 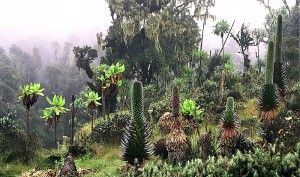 A Montane Zone exists from 1300-1500 m to 4000 m. It has two or three distinct subzones. At the lowest elevations is the montane forest. On wetter slopes this will be broadleaf and evergreen, but composed of species not found in the lowland forest. On drier slopes a coniferous forest of junipers and podocarps occurs. At the upper margins of the montane forest, bamboos may occur in patches or as a nearly continuous belt. The uppermost belt of the Montane Zone is composed of giant heaths (Ericaceae) up to 60 ft tall and draped with lichens.

There is a high degree of endemism among the plant species of the Afro-alpine zone, which have been isolated on individual peaks since the late Pleistocene

Páramo is a moist montane grassland found above treeline at elevations between treeline at roughly 3,000 m and snowline at approximately 4,500 m asl  found primarily on the tropical Andes of Colombia, Ecuador, and Venezuela. While daylength and temperature patterns vary little seasonally, daily and even hourly temperature changes can be pronounced, with morning temperatures at or below freezing and  midday temperatures as high as 23° C (73° F). Solar radiation is more direct and thus more intense than in the midlatitude alpine zones. Additional stresses at high elevations come from thin air and a deficiency  in oxygen. Due to an upslope flow of moist air from the Pacific Ocean, condensation often results in dense fog by early afternoon, rapidly lowering air temperature. Alpine life must be able to respond to sudden changes in the weather and be able to tolerate or avoid freezing temperatures at all times of year.

Growthforms common to tundra species of the Arctic prevail: ground-hugging forms such as rosettes, cushion plants, tussocks, and mats. Many have silvery colored foliage to reflect excess radiation. Leaves on dwarf shrubs are frequently reduced in size and thickened as adaptations to drought. Wet paramo is characterized by tussock grasses (Calamagrostis spp. and Festuca spp.).

The most conspicuous element of some of the several types of páramo are giant rosette plants that stand 3-30 ft above the ground. Their stems are insulated by a thick cover of dead leaves, which shelter invertebrates, small birds, and rodents. The large, yellow daisy-like flowers are protected hairy leaves that fold over them when they are shrouded in fog. Frailejones (Espletia spp) or “little friars” and terrestrial bromeliads (Puya spp.) are representative of this growthform. They are underlain by tussock grasses. 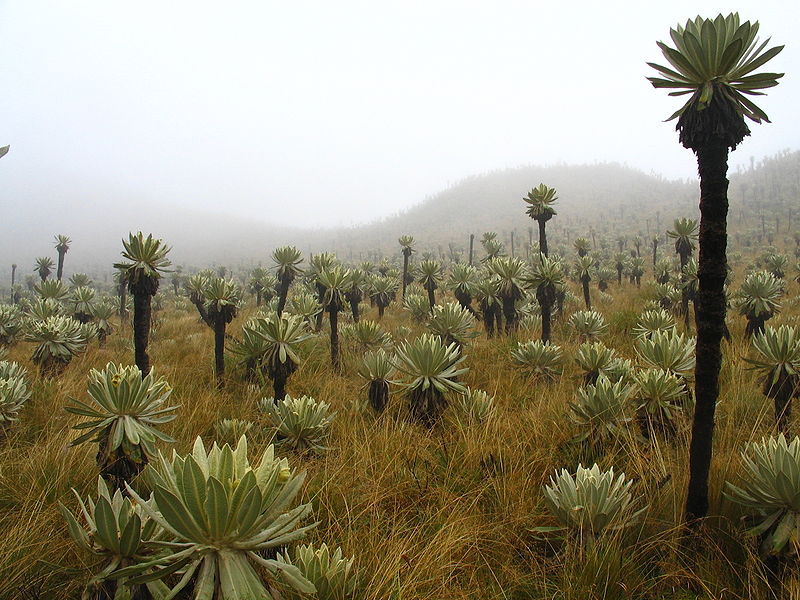 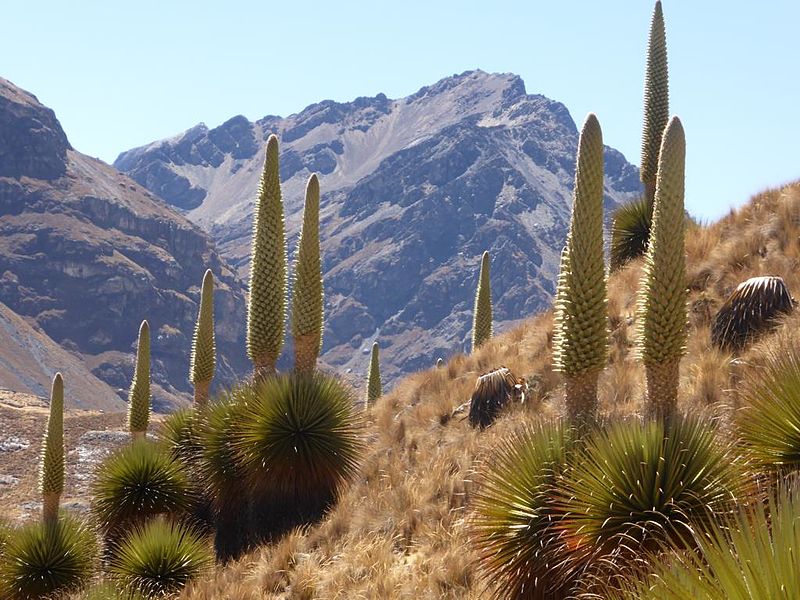 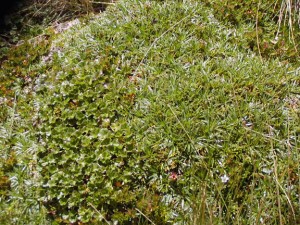 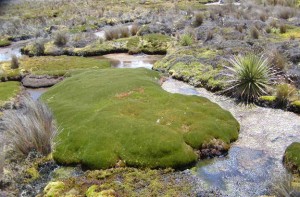 This page is translated into Ukrainian at thesisowl.com/2020-08-07-merriams-life-zones/.